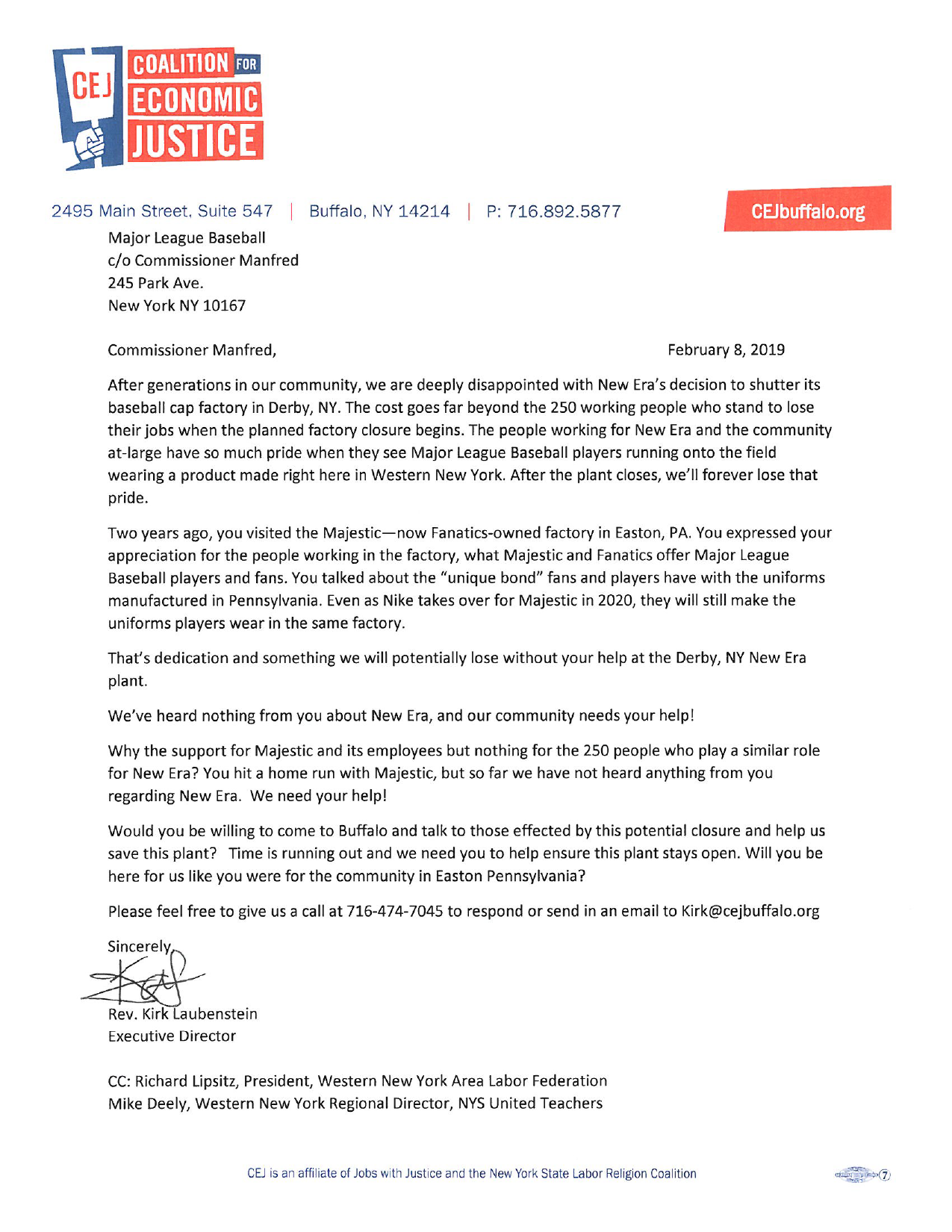 (BUFFALO, NEW YORK) – As the Communications Workers of America (CWA) confirmed the Union has negotiated severance packages for around 200 soon-to-be terminated Workers employed at the New Era Cap Company’s area manufacturing plant, Unions and their allies who are trying to save the Derby Facility have sent a letter to Major League Baseball (MLB) Commissioner Rob Manfred, asking him to step into the fight and lend his support.

The closure of the facility, where a variety of professional sports caps are made - including those for Major League Baseball - will result in the layoff of 200 CWA-represented Workers.

And, what has further stung the local Union Community - New Era also announced it decided to move the operation down south to Miami, where the cap stitching work will be done by Non-Union Workers.  Under its contract with Major League Baseball, the hats New Era makes for MLB must be produced in the U.S.

Still bound by a previously agreed-to gag order negotiated under a past contract with management, WNYLaborToday.com met with CWA Region 1 Area Director Deb Hayes on Tuesday (February 12th), who outlined in generic terms details of the Workers’ severance package - which included number of “covered issues” concerning a “severance, health and accrued benefits,” such as unused vacation.

“It is ‘disappointing this extremely profitable company wasn’t willing to do more to honor the commitment these Workers had made to their success over the years.’  We ‘continue to be saddened’ by the closure of the plant.  ‘Unfortunately, many’ of these Workers - ‘extremely skilled’ Workers - ‘will have difficulty finding comparable jobs elsewhere.’  ‘We do not know how many of the Workers have found (new employment),’” Hayes said.

Meanwhile, the CWA understands New Era brought in a professional third party to provide the Workers with “resume writing and job search” assistance as the plant heads towards a final May shutdown, where only one remaining department will be employed up to that time.

On another front, the Coalition For Economic Justice (CEJ) has sent a letter to MLB Commissioner Manfred, asking him to - in so many words - involve himself in the fight to save the New Era/Derby Plant, much like the MLBPA (Players Association) had done in the State of Pennsylvania.  At the Majestic Plant in Lehigh Valley, MLB on-field uniforms and fan-wear will continue to be made well into the future, a move that will keep as many as 600 jobs in place.

“Why the support for Majestic and its Employees, but nothing for the people who play a similar roles for New Era?  You hit a home run with Majestic, but so far we have not heard anything from you regarding New Era.  We need your help!,” the letter read (which appears below). “Would you be willing to come to Buffalo and talk to those effected by this potential closure and help us save this plant?  Time is running out and we need you to help ensure this plant stays open.  Will you be here for us like you were for the community in Easton, Pennsylvania?” 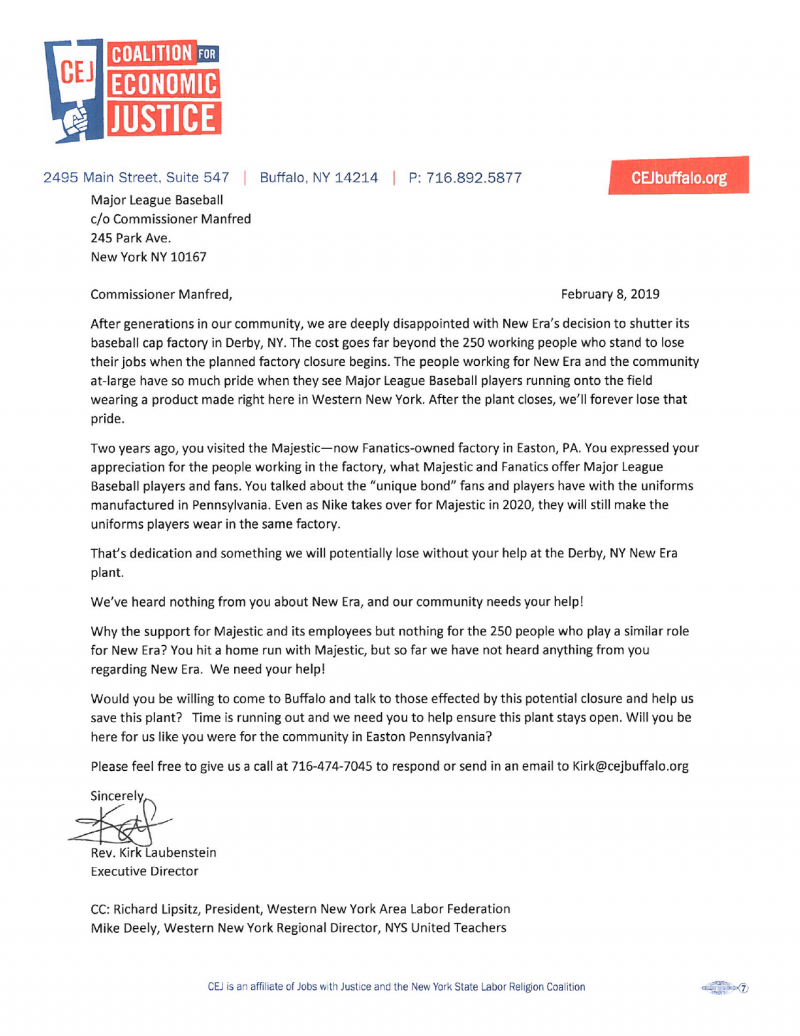 “We’re ‘hoping to get New Era to reconsider, similar to what happened at Majestic,’” Joe Cantafio (the West Seneca Teachers Association President, who also serves on NYSUT’s Statewide Board of Directors and is an Executive Board Member of the WNYALF) told WNYLaborToday.com. “We’re ‘gotten great support from our Elected Officials’ and (New Era is) getting the message: ‘Don’t put profits over people.’”

In order to keep a public spotlight focused on the fight, the Union Members and Activists have been holding weekly informational picketing outside New Era’s grandiose Downtown Buffalo Headquarters, which is garnering a great amount of publicity. 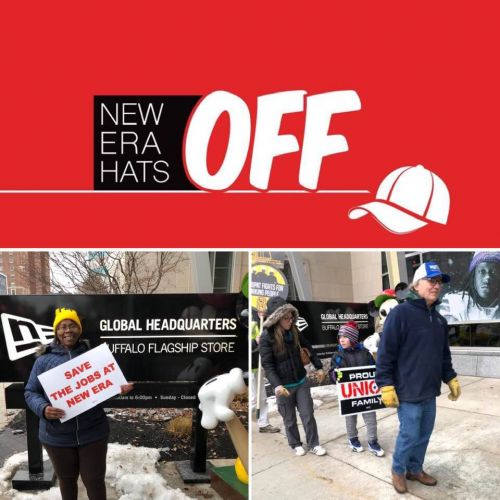 For More On This Labor News Story, Read WNYLaborToday.com’s January 27th Labor News Report, Headlined: Unionists Rally Outside New Era Field To Protest The Closure Of The Pro Sports Cap Maker’s Local Production Facility, ‘Lament How Far’ Owner Christopher Koch ‘Has Fallen’ - ‘Both In Their Eyes & The Eyes Of The Community’