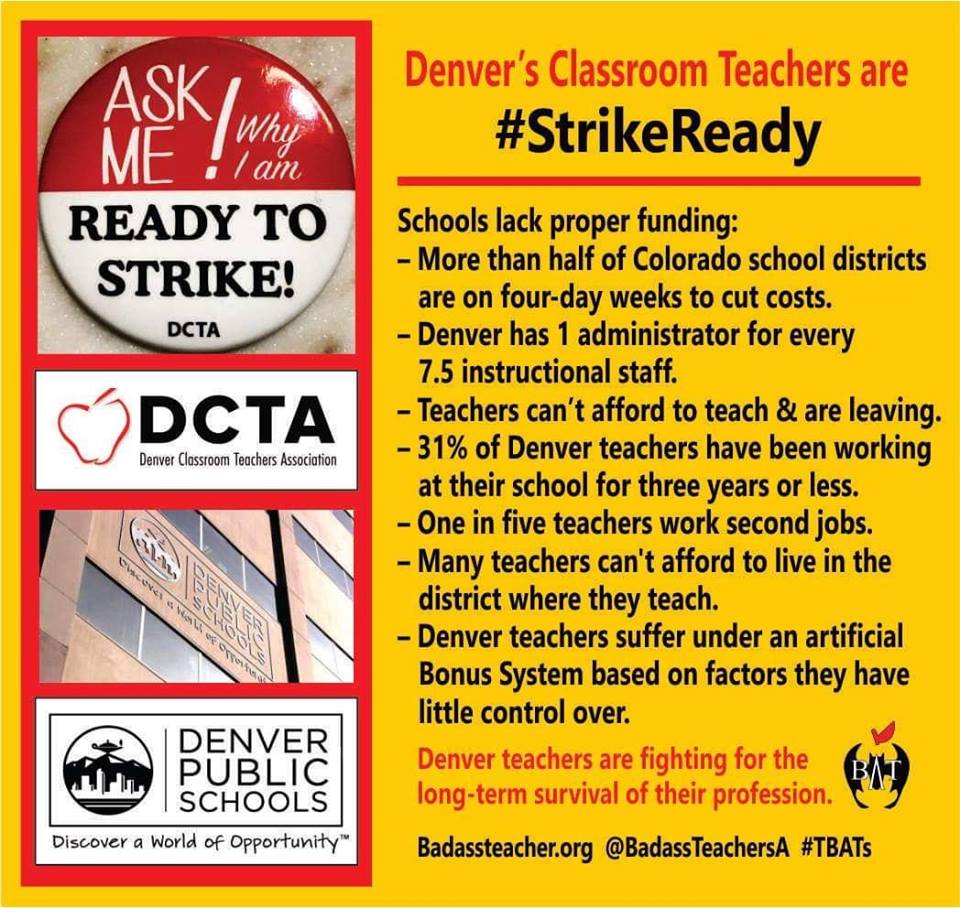 "If they don't pay us, shut it down," some chanted at South High School this morning. "What do we want?  Fair pay!  When do we want it?  Now!"

The Strike comes after more than a year of negotiations between the Teachers Union and the school district, that have focused on how to calculate base pay.  The city hasn't experienced a Teacher Strike in 25 years.

Most Denver Public Schools will remain open and the district has readied hundreds of additional substitute teachers. It's unclear how many of the district's more than 5,000 teachers will actually walk out.

It will cost about $400,000 a day to keep the schools running during the strike, Governor Jared Polis said.  That's about 1% to 2% percent of the budget for the school year if the Strike lasts a week, The Colorado Sun reports.

"We will strike for our students and for our profession, and perhaps then (Denver Public Schools) will get the message and return to the bargaining table with a serious proposal aimed at solving the Teacher turnover crisis in Denver," said Henry Roman, who serves as the President of the Denver Classroom Teachers Association, the Associated Press reported.

The fundamental disagreement between the two sides concerns how base pay is calculated.

Twenty years ago, the district first piloted the "Professional Compensation System for Teachers," known by most as ProComp.  According to The Denver Post, the system paid Teachers based on performance, with a series of bonuses that the district hoped would attract high quality Educators.  At the time, ProComp enjoyed support among school district officials and the Teachers Union, but teachers say ProComp makes it hard to earn a fair and predictable salary, The Denver Post reports.

Both sides have offered proposals to simplify the system, but there is still disagreement over the use of bonuses.

The district's proposal allocates more money toward base pay, but still offers up to $2,500 in incentives for Teachers working in certain high-poverty schools, The Denver Post reports.

In a statement reported by the Associated Press, the Teachers Union said the district's proposal lacks transparency and "pushes for failed incentives for some over meaningful base salary for all."

A starting Teacher salary in Denver currently begins at $43,255 a year, USA Today reports.  The district proposal raises that to $45,500, but Teachers want $45,800.  The school district says its proposed base pay increase adds an additional $11 million in Teacher compensation.

In anticipation of a strike, the school district hired 300 new Substitute Teachers to bolster its roster of 1,200 Subs, The Denver Post reported.

An additional 1,400 administrators are also ready to help out where needed at the schools.

Every school in the district will remain open today, but pre-school classes will be canceled.

Negotiations will resume Tuesday following a day of Teachers' picketing at their schools.

Absolutely! STRIKE if you must! Sometimes 'it becomes inevitable' that Workers of 'all' Unionized industries of employment 'will rise to the occasion to fight back!' Yes! - 'Enough is Enough!' Put the administration 'on its heels and hit them with a fierce blow.' The news last night showed a gathering of some 3,000Tteachers and others demonstrating - 'standing in solidarity,' the Teachers 'will prevail!' Posted by Dan Boody on February 12, 2019 at 8:28 am