You Could âNever Scareâ This Woman: Mother Jones 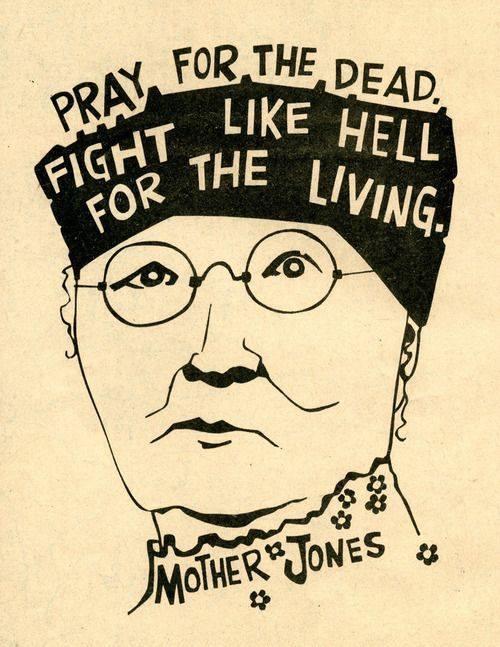 I’ve always admired strong women, beginning with my mother and grandmother.  Strong women form the bedrock of any civilization and men would be foolish to dispute this: Perhaps the strongest woman who ever lived was Mary Harris “Mother” Jones.

Born in Ireland not long before the Irish Potato Famine, Jones was forced to immigrate to the United States, where she lost her husband and children to an outbreak of Yellow Fever in 1867.

As if this were not enough, she lost her home to the Chicago Fire of 1871.

But this did not stop her from becoming one of the most radical and effective Labor Organizers of her time - in fact, it likely shaped her into the woman she would become.

Since she lost her own children, she adopted downtrodden Workers as their surrogates, attempting to liberate them from the throes of Gilded Age of capitalism.

Some context is important for non-historians: When American Workers go on Strike nowadays for better wages and working conditions, they might be lambasted in the press, see their demands rejected or fired en masse in certain cases.

By contrast, when Workers went on Strike in the Gilded Age, they were murdered.

I saw it live almost 10 years ago and still get goosebumps when I think about it.

I can imagine that it’s hard to be scared when you have already lost almost everything important to you.

Anyone would be lucky to have half the amount of bravado.

No offense to the Federal Employees affected by the latest Trump temper tantrum - otherwise known as the Government Shutdown of 2018-19, but their reactions (along with ours, as supporters) lacked even a modicum of Jones’s militancy.

During a Coal Miner Strike in 1912, Jones told the Workers: “We have got to put out the fellows who stand with the robbing class and we have got to put them out of business, we have got to make an honest Nation.  The whole machinery of capitalism is rotten to the core.  You will not be serfs, you will march, march, march on from milestone to milestone of human freedom, you will rise like men in the new day and slavery will get its death blow.  It has got to die.”

Instead, in 2019 we cling to what little benefit capitalism gives us at the expense of leisure time, our families, our health, and even our soul.

Leaders like Nancy Pelosi are afraid of even trying to put Trump out of business (by way of impeachment) because of the perceived consequences of failure, and as a result of the rapacious actions of modern day robber barons like Trump, most of us have been reduced to Worker Bees with little hope of Horatio Alger-like advancement.

If only Mother Jones were still alive today to fight back.

To Access This Labor News Perspective, Go To: https://goodmenproject.com/featured-content/cant-scare-this-woman-mother-jones/?fbclid=IwAR2uU3nBEiKnnUYzGPMBEdquO1yqWAktDEDTFMK7u1DQ9pAKhmfwuTjIEZw