Involving Retirees In Informational Pickets & Rallies At Major League Baseball Spring Training Games In Florida & Arizona And High Profile Actions In New York City Are Being Considered, As Well As Reaching Out To MLB Baseball Players For Their Suppor 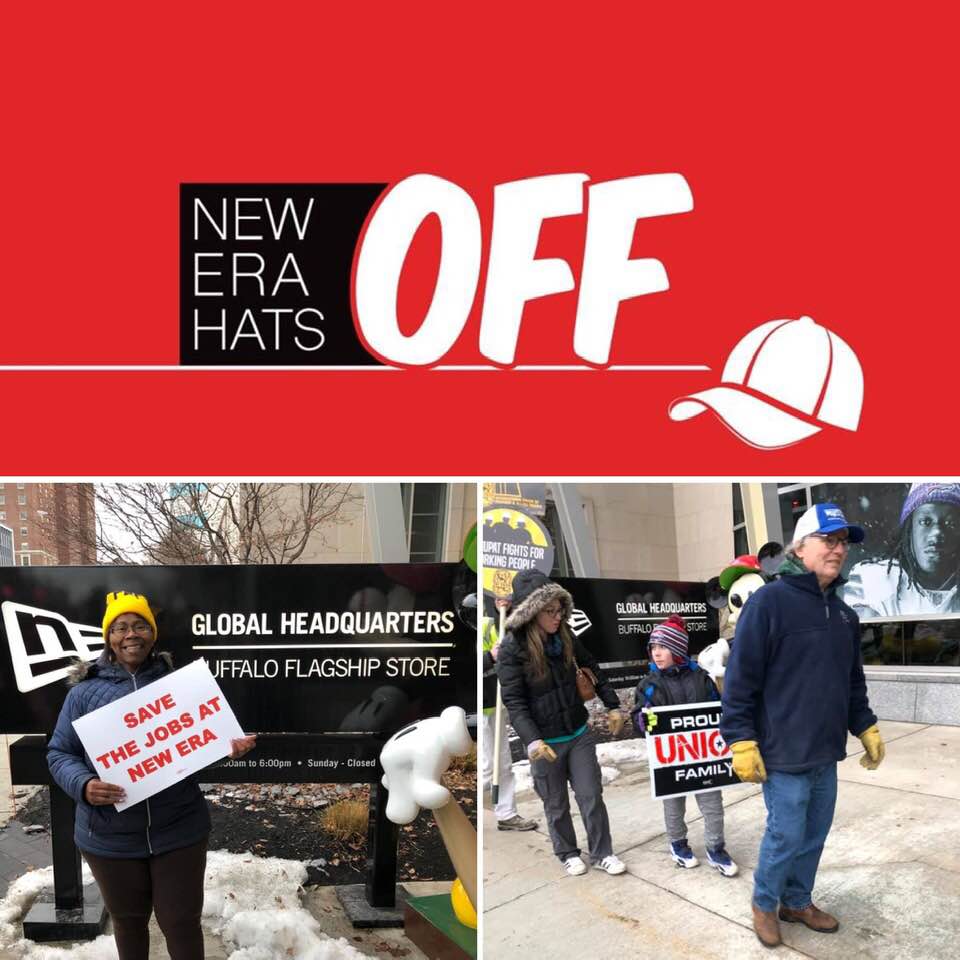 (BUFFALO, NEW YORK) – Once again, representatives from area Unions picketed outside New Era Cap’s grandiose Downtown Buffalo Headquarters on Tuesday (February 5th) in a continuing effort to get the world-renown professional sports capmaker to change its mind and not move 200 Union-represented local jobs to a Non-Union Plant in Miami.

The informational rally was one of four new similar actions that will take place during the remainder of the month of February outside New Era’s Delaware Avenue Offices before a series of additional and expansive efforts could begin to happen in the States of Florida and Arizona, and in New York City, a New York State United Teachers (NYSUT) Union Leader tells WNYLaborToday.com.

Just before Thanksgiving, New Era announced it would shutter its Derby manufacturing plant in March (2019), which is located just south of the City of Buffalo and has been in operation since the 60s, although the company has roots in the community dating back to the 1920s.  The closure will result in the layoff of 200 Workers, the majority of which are represented by the Communications Workers of America (CWA).  And, what has further stung the Union Community - New Era also announced it decided to move the operation down south to Miami, where the cap stitching work will be done by Non-Union Workers.  Under its contract with Major League Baseball, the hats New Era makes for MLB must be produced in the United States.

With CWA-represented New Era Workers having agreed to a gag order in a their last negotiated contract that has forbidden them to speak publicly when it comes to situations like this, the Western New York Labor Movement and its Member Unions have stepped up to the plate, so to speak, in order to pick up the fight to get New Era to change its mind and stay. 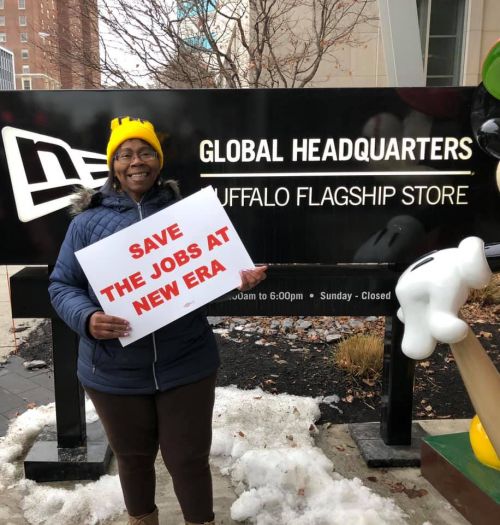 The Labor Movement has also upped the ante with an intensified and growing Social Media Campaign on both Facebook and Twitter, a new web site (www.NewEraHatsOff.com) and heavy-hitting backing from American Federation of Teachers (AFT) President Randi Weingarten and National Education Association (NEA) President Lilly Eskelsen Garcia (who, on video that is featured on Twitter, threw down to the ground a New Era-made cap while grinding the hat into the floor with her right foot, proclaiming at the same time: “Hats off.”)

“We’re ‘turning up the heat with a picket a week’ (for four consecutive weeks) ‘and are considering engaging (NYSUT) Retirees in Florida (in late February) and Arizona during Spring Training (in similar Hats Off informational picketing),’” NYSUT Regional Director Mike Deely tells WNYLaborToday.com.  “There’s a ‘gag order’ on the CWA Workers, so the WNYALF (Western New York Area Labor Federation - the umbrella AFL-CIO Labor Organization that oversees five Labor Councils) ‘decided we had to publicly support’ these New Era Workers.” 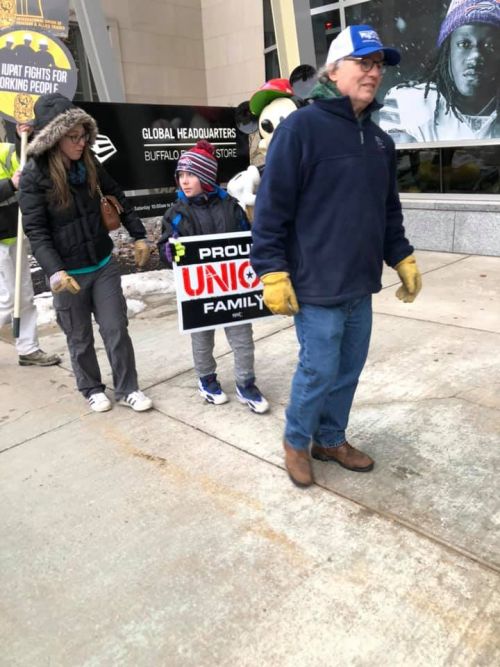 NYSUT has taken the lead on the effort for several reasons, Deely said, most notably that its Lake Shore Central Teachers Association (LSCTA) affiliate has been heavily involved in the fight, mainly because of the economic damage that will be done to the Town of Derby and Evans where the New Era Plant in located, to the School District - which will hurt by the loss of property taxes, and more importantly - to the 200 Workers and their families who will be displaced by the extremely profitable company’s decision to leave town.

“NYSUT ‘was ready to pick up the baton’ when (CWA Members employed at New Era) ‘couldn’t,’” Deely told Your On-Line Labor Newspaper.  “We’re also talking right now about a statewide campaign (against New Era).  Joe Cantafio (the West Seneca Teachers Association President, who also serves on NYSUT’s Statewide Board of Directors and is an Executive Board Member of the WNYALF) has been talking to New York City Teachers too (with MLB’s New York Yankees and Mets playing there).  ‘We have to turn up the pressure.’”

On another front, Deely told WNYLaborToday.com that Hats Off supporter NEA President Eskelsen Garcia attended the Super Bowl as a guest of the National Football Players Association (NFLPA) and was expected to talk to NFLPA Union Officials about the New Era situation and to determine what help the Union might be in the fight to keep the New Era jobs in Buffalo. 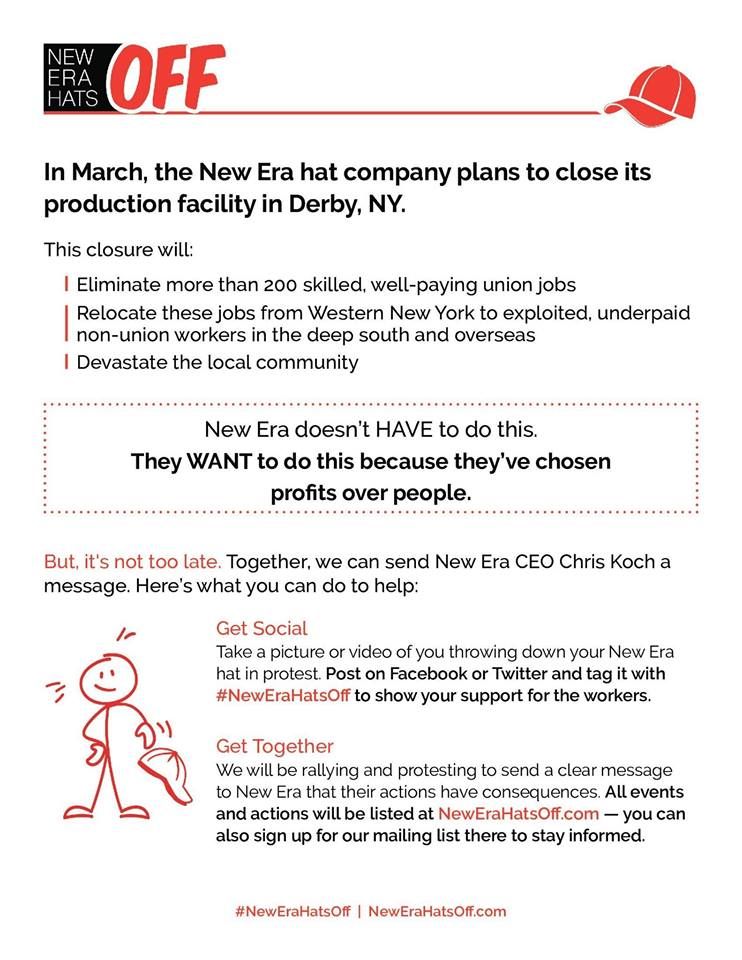 Cantafio, meanwhile, told WNYLaborToday.com that Garcia’s Hats Off video on Twitter has been shared by Teacher Unions across the United States, including the Los Angeles Teacher’s Union, which just successfully reached agreement on a new contract after a very high-profile six-day Strike.  “Even Unions like the United Auto Workers (UAW) are sharing that video and with (1.7 million) Members that the American Federation of Teachers has, ‘it is being spread further and further across the country,’” he said.

“We ‘need to keep giving people the facts,’” Cantafio told Your On-Line Labor Newspaper.  “(New Era) is making ‘record profits,’ so that’s why we have been asking: ‘Shouldn’t the home team (New Era) stay home?’  We’re also looking at some next steps, including ‘boycotting’ New Era.  ‘Everything is on the table, but it’s a unique situation.’  ‘We’re exploring all options and taking things step by step.’” 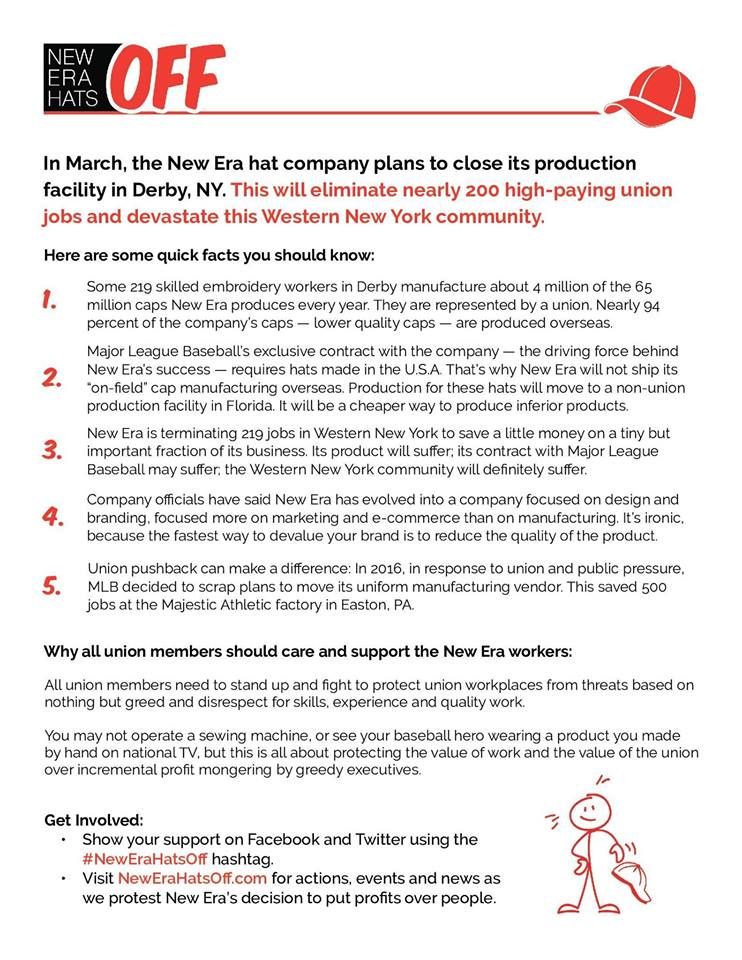 The Western New York Labor Movement hopes have also been somewhat buoyed by a report that came out of Pennsylvania, where the MLBPA played a role in helping keep as many as 600 jobs at the Majestic Plant in Lehigh Valley, where MLB on-field uniforms and fan-wear will continue to be made well into the future (Read the February 1st Labor News Report, Headlined: With New Era’s Plans To Move Their Union-Represented Pro Sports Cap Hat Manufacturing Plant To A Non-Union Location In Miami – Read This Story About A Pro Sports Clothing Manufacturer That’s Staying Put Because Of The Players’ Union).

“We’re ‘hoping to get New Era to reconsider, similar to what happened at Majestic,’” Cantafio told WNYLaborToday.com. “We’re ‘gotten great support from our Elected Officials’ and (New Era is) getting the message: ‘Don’t put profits over people.’”

In addition to NYSUT, the Civil Service Employees Association (CSEA) - which represents 300,000 Public Employees across the State of New York - here in Western New York has also gotten heavily involved in the fight to keep New Era jobs here in the Buffalo area.

When asked why, CSEA Local 815 President Denise Szymura told WNYLaborToday.com: “It’s ‘up to all Unions to get involved because it just isn’t fair (for New Era) to take the money and move its business elsewhere.’”

For More On This Labor News Story, Read WNYLaborToday.com’s January 27th Labor News Report, Headlined: Unionists Rally Outside New Era Field To Protest The Closure Of The Pro Sports Cap Maker’s Local Production Facility, ‘Lament How Far’ Owner Christopher Koch ‘Has Fallen’ - ‘Both In Their Eyes & The Eyes Of The Community’