In Right-To-Work (For Less) Georgia, How âUnionâ Was The Super Bowl? 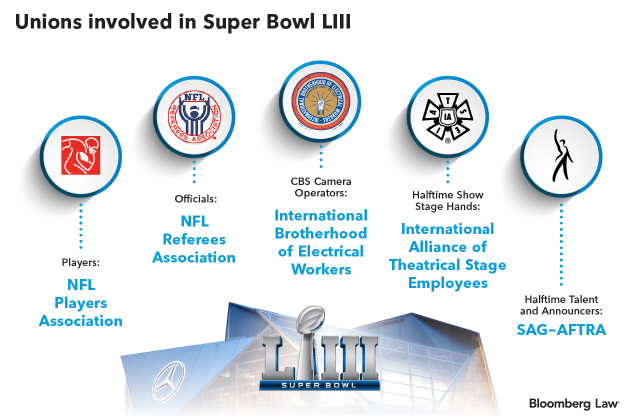 (ATLANTA, GEORGIA) - The winning players in Sunday’s Super Bowl LIII in Atlanta were guaranteed bonuses of $118,000 under their Union Contract for around three hours of work.  That’s about 3.5 times the annual wage rate for the security guards working the event and it makes for a showcase in Income Inequality and job insecurity.

The professionals on and around the front lines of the game, from New England Patriots Quarterback Tom Brady to the officials to halftime music act Maroon 5, will be working under Union Contracts, while those working behind the scenes are being brought on part-time and lack representation.  That’s due in part to the State of Georgia being a Right-To-Work (for less) State where only 4.5% of its Workers belonged to a Union in 2018, ranking 46th out of 50 States and the District of Columbia.

While at least five International Unions had Members working the Super Bowl, “Organized Labor is underrepresented for many operational and concession contracts for the Super Bowl and other events at Mercedes-Benz Stadium,” Valerie Barnhart of Georgia’s AFL-CIO said in an e-mail to Bloomberg Law.

None of Mercedes-Benz Stadium’s full-time associates are Unionized, according to stadium spokesman Jason Kirksey.

However, the Super Bowl was televised on CBS, and - as usual, the network relied heavily on International Brotherhood of Electrical Workers (IBEW)-represented Broadcasting Members to provide a world-class viewing event.

IBEW Camera Personnel and Technicians were in charge of transmitting the pictures and sounds from Mercedes-Benz Stadium in Atlanta, as they have been many times before.

There are about 300 Members on site working for the network and representing about 15 different job classifications, including Camera, Audio, Utilities, Replay, Video Engineering, Graphic Artists and Editors.  They are represented by: St. Louis Local 4; Hollywood, California Local 45; Washington, D.C. Local 1200; and New York Local 1212.

That figure doesn’t include IBEW Members working for other television and radio outlets reporting from Atlanta.

“I’m a sports fan and I watch the Super Bowl every year, but I enjoy it a little more when our Members are providing the sound and pictures,” IBEW International President Lonnie Stephenson said before the game. “They’re the best at what they do and deserve to show off their work to the widest possible audience.  It’s another reason we’re so thankful for our long partnership with CBS and I know our Brothers and sisters will make us proud on Sunday night.”

The IBEW has represented CBS Workers since 1939, when it was still a radio company, and its Camera Operators and Technicians have worked all 20 Super Bowls by CBS, the most of any American network.

The IBEW also represents Camera Operators and Technicians at Fox Sports, which has aired eight Super Bowls - meaning IBEW Members will have worked 28 of the 53 Super Bowl games played since 1967.

“Working an event of this magnitude is something we never take for granted,” IBEW Broadcasting and Telecommunications Director Martha Pultar said. “Football fans across North America know CBS will present a superb broadcast of the game and our IBEW Members on the scene in Atlanta are a big reason for that.”

For More On This Labor News Story, Go To: https://news.bloomberglaw.com/daily-labor-report/brady-wears-super-bowls-union-label-while-hourly-workers-dont

You Can Also Click Here To Read More About The Presence Of The IBEW And Other Unions In Right-To-Work Georgia During Super Bowl Week.