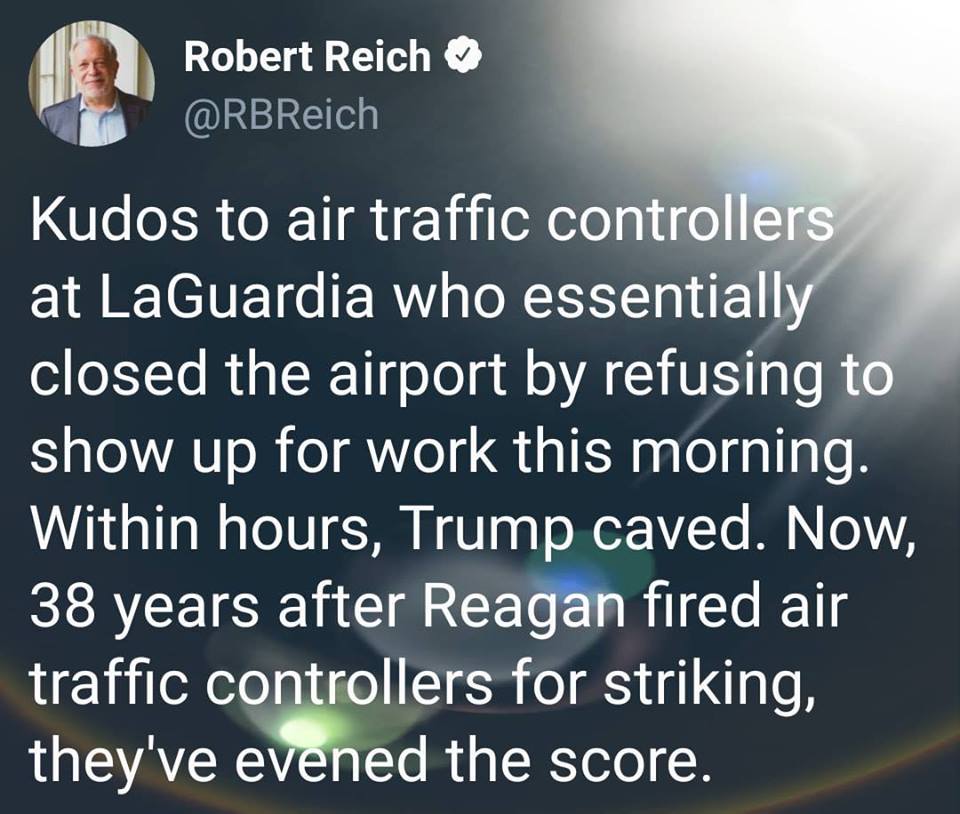 Air Traffic Controllers hold the trump card (pardon the expression) in upcoming negotiations between Republican President Donald Trump and Congressional Democrats over border security.  That’s because Trump and the Republicans know that another shutdown would likely cause a repeat of what happened last Friday, when so many of the Nation’s Air Traffic Controllers called in sick that America’s air traffic came to a near standstill.

Hours later, Trump agreed to reopen the government without funding for his wall.

Never underestimate the power of airport delays to arouse the Nation.

Speaker Nancy Pelosi deserves credit for sticking to her guns, but the Controllers brought the country to its knees.

Trump is threatening another shutdown if he doesn’t get his way by February 15th, when government funding will run out again.

“Does anybody really think I won’t build the WALL?” he tweeted his acting chief of staff said he was prepared to shutter the government for a second time.

But his threat is for the cameras.

If there’s no agreement this time around, the Controllers won’t work another 35 days without pay.

Now that they understand their power, they will shut down the shutdown right away.

And Trump knows this.

Ironically, it was Ronald Reagan’s audacious decision in 1981 to fire and replace more than 11,000 Air Traffic Controllers who were then striking illegally that legitimized decades of Union Busting.

It also signaled to employers around the country that Unions - both Public and Private-Sector - were fair game.

It also unleashed political forces against Unions, culminating last year with the U.S. Supreme Court’s 5-4 decision in Janus v AFSCME, holding that Government Workers can’t be forced to contribute to Labor Unions that represent them in collective bargaining.

But the decision last week by thousands of Controllers not to come to work wasn’t a Strike and it wasn’t initiated by a Union.

Beforehand, Paul Rinaldi, the President of the Controller’s Union - the National Air Traffic Controllers Association, even went so far as to announce the Union did not “condone or endorse any Federal Employees participating in or endorsing a coordinated activity that negatively effects the capacity of the National Airspace System.”

Not all Public Workers can expect similar results by walking off their jobs.

The walkout has to cause a major disruption.

No Federal Law prohibits Federal Employees from getting sick or calling in sick.

And who’s to say it was coordinated?

Today, the internet can spread information about a voluntary walkout as quickly and efficiently as any centralized coordinator.

The larger story is Public Workers who lack any formal power to Strike - but have the informal power not to work – are becoming a new force in American Politics and Labor Relations.

To Continue Reading This Labor News Story, Go To: www.theguardian.com/commentisfree/2019/jan/29/air-traffic-controllers-defeated-trump