For Any Union Member That Votes Republican: Hoping To Dissuade Teachers From Staging Walkouts, An Oklahoma GOP State Legislator Introduces Bill To Revoke Teacher Certifications For Hitting The Streets 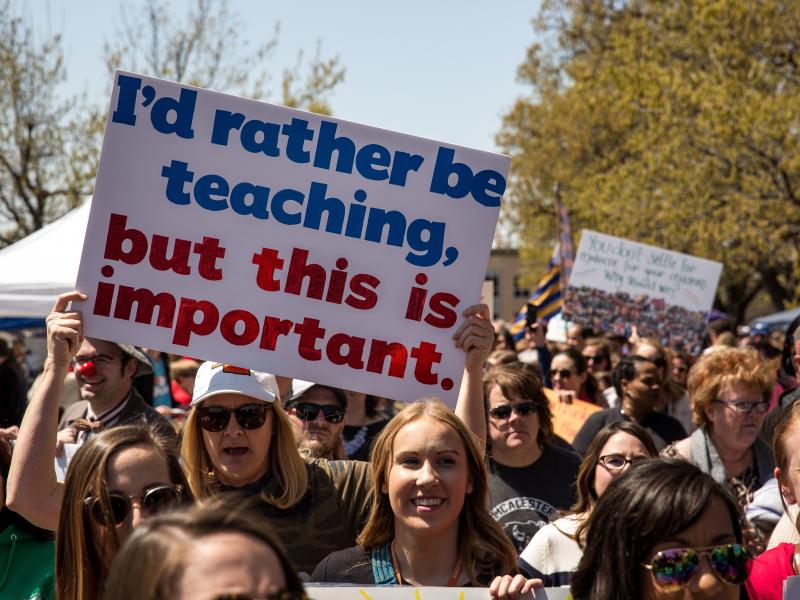 (OKLAHOMA CITY, OKLAHOMA) - As the nationwide wave of Teacher Strikes keeps gaining momentum, an Oklahoma bill would make it illegal for Teachers to walk out and protest, but House Bill 2214 doesn’t stop there - it would also permanently revoke certifications of Teachers who break the rule, preventing them from ever teaching in the state again.

The bill’s author, State Representative Todd Russ, said the main point is to make sure kids don’t suffer a disruption in their education.  “Students deserve to be in their classrooms learning and preparing for their next grade and their next phase of life,” Russ told CNN.

While it’s already illegal for Teachers to go on Strike in Oklahoma, but Russ says the new bill fixes a loophole in the existing law.  Last year, hundreds of Teachers flooded the state capital for nine days, demanding more school funding and higher raises.  They were able to do so because that protest was a ‘walkout’ - not a ‘Strike.’

A Teachers’ Strike happens when battling a school board, said Alicia Priest, who serves as the President of the Oklahoma Education Association (OEA).  During a Strike, Teachers usually protest while they’re supposed to be in school.  But with last year’s “walkout,” many Teachers told their administrators they’d be absent.  That forced some school districts to cancel classes, since there wouldn’t be enough educators in the schools.  And because many schools were closed, Teachers could protest at the capital without punishment.

Russ said the OEA skirted the law and wants to prevent that from happening again: “Much like Air Traffic Control Operators and other Union Groups that are not allowed to Strike based on the safety or wellbeing of third parties, Teachers’ Unions also understood when House Bill 1017 passed in the 1990s that it would be illegal for them to Strike again because of the disruption in classrooms.  Thus the reason for the new language.”

But the OEA President Priest thinks the bill is “retaliation for the nine days of school closures that we had last year,” which she said was “such a positive event for so many people.”  Priest said students didn’t miss much education, because some districts added missed days to the end of the school year.”