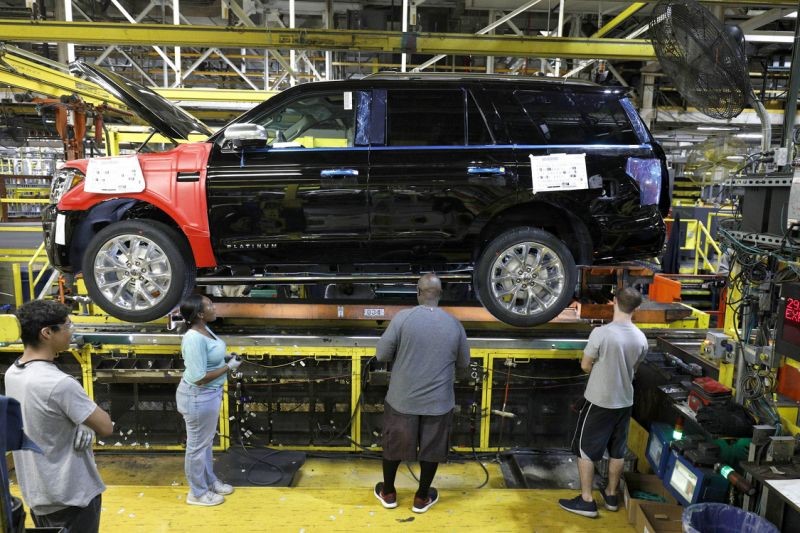 (DETROIT, MICHIGAN) - While Hourly Workers employed by Ford Motor Company - on average - will each get a $7,600 profit-sharing check in March, the dollar amount would have been even larger if not for Republican President Donald Trump's tariffs.

During a discussion with analysts about Ford's 2018 annual earnings report, Chief Financial Officer Bob Shanks revealed the carmaker absorbed about $750 million in tariff costs.  Trump, in seeking to push China, Mexico and Canada into better trade deals, imposed tariffs of 25% on steel and 10% on aluminum last year.  Ford had to pay those costs to import materials to build vehicles.  "Tariffs is something we'll continue to watch" in gauging Ford's future finances, Shanks said.

United Automobile Workers (UAW) Union Workers, who negotiate profit sharing as part of contracts negotiated every four years, will be watching too.

Ford's Factory Workers will see their profit-sharing checks grow slightly from $7,500 to $7,600 for work completed last year, but the checks would have been 10% higher were it not for the tariffs.  That's because Ford's Factory Workers receive $1,000 on average for every $1 billion in company profits in North America, where the bulk of Ford profits are made.  So, if Ford spent about $750 million on tariff costs, as the company said, then Workers took an average $750 hit.

Ford employs about 56,000 Hourly Workers, but not all qualify for profit sharing.

In addition to tariffs, Ford also noted its unexpected $1.1 billion increase in steel and aluminum costs.  "This is due to (25%) tariffs on steel and (10%) on aluminum because U.S. producers raised prices by exactly that amount as soon as the importers did," said Jon Gabrielsen, a market economist who specializes in manufacturing.

“Ironically the tariffs that are supposed to protect Workers reduced profit sharing for workers by about ($750 to $1,850) per Worker. It would have been about ($8,350 to $9,450) each without the components and metals tariff cost to Ford’s profits," he said.

Ford spokeswoman Karen Hampton declined comment on the tariff impact on Workers.  However, she did confirm that tariffs, higher commodity costs and Takata airbag recalls reduced the automaker's profit in North America by $1.9 billion in 2018.  That translates to a $1,900 reduction in profit-sharing checks to UAW Members, Hampton acknowledged.

Performance-based compensation is meant to unite everyone to have a hand in the health of the company.  UAW Workers began qualifying for profit-sharing checks in 1982 with the first payout in 1983, said Union Spokesman Brian Rothenberg.

In the past, UAW Leaders have voiced support for a targeted approach to tariffs that focus on the countries that are flooding the U.S. market with product or causing economic disruption.

John Nassar, the UAW’s Legislative Director, testified before the U.S. Senate Committee on Finance and also submitted a statement dated September 28th (2018) about tariff impact on the U.S. Auto Industry: "Our goal is to create good paying U.S. jobs now and in the future.  We proudly support policies that strengthen the Middle Class, create good paying jobs providing benefits and retirement security in the United States and reduce income inequality both here and abroad.  It has been demonstrated time and time again that a vibrant Middle Class is needed in order to have a strong economy and democracy."

UAW Member Jim Celmer, who works at the Livonia Transmission Plant in Livonia, Michigan, said: “Don’t get me wrong, bigger is always better, but we went a stretch a few years back without getting anything, and a couple years with very small checks, so this is a nice check.  As far as the tariffs cutting into our checks, that's a product of Trump's ideas.  I'm not a fan of sharing my political beliefs, so I'll stay away from that question.  His tariffs hit many people in different ways."

To Continue Reading This Labor News Story, Go To: www.yahoo.com/news/trump-tariffs-reduce-ford-uaw-185503406.html?fbclid=IwAR1ri1TLhjJTb2r4cPP-hWnQOxxYeOzpEggG26eQ8Pl6r1Fe-C4nca2IP7M

For More On This Labor News Story In Western New York, Go To: https://buffalonews.com/2019/01/28/ford-hourly-workers-to-receive-7600-profit-sharing-checks/