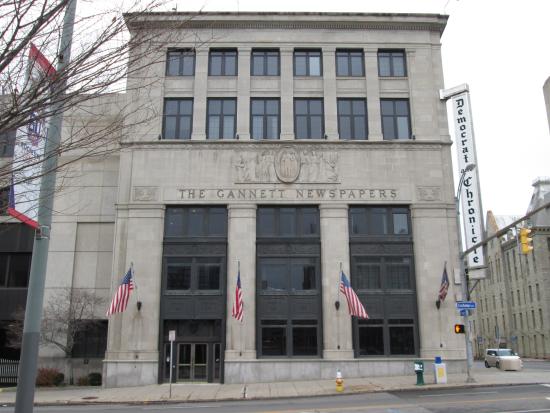 Gannett began slashing jobs all across the country earlier this month in a cost-cutting move that was anticipated even before the recent news that a hedge-fund company was planning to buy the news chain - and, the cuts were not minor.

At The Indianapolis Star, three Journalists were laid off, including well-known Columnist Tim Swarens.  At The Knoxville (Tennessee) News Sentinel, University of Tennessee Women’s Basketball Reporter Dan Fleser is out after more than 30 years in sports.  The Tennessean cut three positions, including High School Sports Reporter Michael Murphy.  Traci Bauer, Executive Editor of LoHud (New York), was let go.  Six were laid off at The Record in North Jersey after nine took an early retirement buyout earlier this month.

News of the layoffs leaked out on Twitter and across newsrooms and continued well into the night, with reports of cuts at The Corpus Christi (Texas) Caller-Times, The Argus Leader in Sioux Falls, South Dakota, The Fort Myers (Florida) News-Press and USA Today’s travel section.

It’s still unclear how many Journalists and how many news outlets were impacted.

Gannett did not respond to a request for comment.

So, do the cuts have anything to do with the possible sale of Gannett to Digital First Media?

“I don’t know how many newsroom jobs Gannett is cutting, but the move it is hardly surprising with a bad fourth quarter financially to be reported soon and more of the same expected for the first part of 2019,’’ said Rick Edmonds, Media Business Analyst for Poynter. “These cost reductions are typically planned at the end of the year, then carried out in January.  So I doubt the layoffs and buyouts have anything to do with the Digital First takeover bid.’’

However, Bernie Lunzer, who serves as the President of The NewsGuild-CWA, laid the blame partly on Digital First Media.  In a statement to Poynter, Lunzer wrote: “Gannett is choosing the low road here - a direct result of the hostile efforts at a takeover by Digital First Media.  DFM is once again causing grievous harm to an industry it pretends to be a steward of.  Both companies have lost sight of the critical product they are meant to provide - journalism.  Newsrooms that could be preserved are being decimated for Wall Street when there are productive paths forward. Let’s find a way to sell these properties to the communities they serve before it’s too late.”

Whom to blame didn’t make the news any less depressing for those in the business and, particularly, those impacted.

Jaci Smith, who worked at the News Journal Media Group in Delaware, tweeted:  “25 years in the industry and it’s over after a 10-minute chat in a sterile conference room.  My heart aches for journalism and all my fellow #gannett colleagues who were laid off today. #journalismmatters’’

Kristi Nelson, the President of the Knoxville Newspaper Guild, told the State of Newspapers: “It’s distressing to once again be mourning Staff cuts in our newsroom.  Not only do our hearts go out to our colleagues, we acknowledge that the loss of any trained, Professional Journalist is a loss to our readers as well - one less voice speaking on behalf of the community we cover.’’

To Continue Reading This Labor News Story, Go To: www.poynter.org/business-work/2019/gannett-lays-off-journalists-across-the-country/