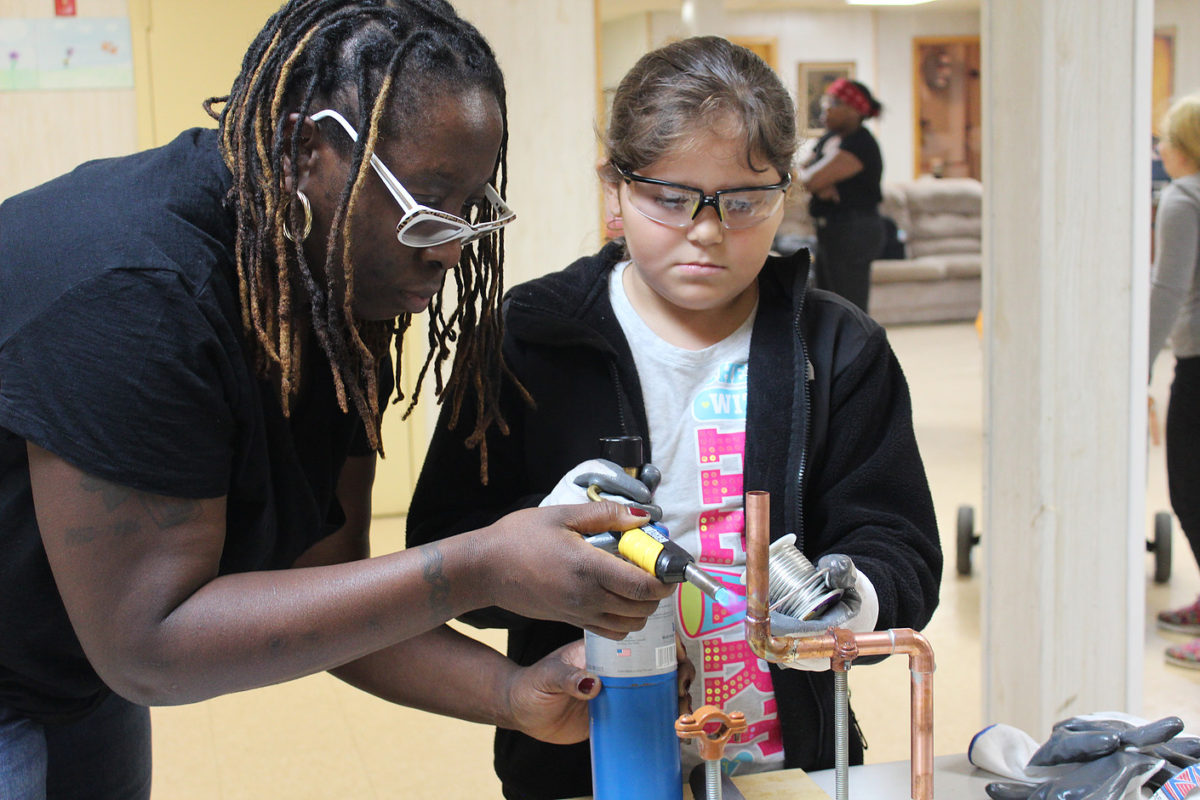 (NEW YORK CITY) - Tools and Tiaras’ web site features a video of girls in a London elementary school drawing Firefighters, Surgeons and Pilots as almost exclusively male - and then being presented with women in those jobs.  Now, the organization is trying to do the same stereotype-cracking work for the Building Trades.

Since last June, it’s run monthly workshops for girls seven and older to teach them basic construction skills like how to solder a copper joint and how to install a bathroom faucet.

The workshops are also open to adult women, and in the next few months, they plan to expand that to electrical work and welding.

All are “taught by Union Trade Sisters like myself,” says founder Judaline Cassidy, a Member of Plumbers Local Union 1 for 20 years.

“It’s been an idea in my head for long time,” Cassidy tells LaborPress, speaking on the phone during her lunch hour at a job on the Upper East Side.

The organization is being funded “by me and my Plumber’s paycheck.”

Tools and Tiaras has two missions, she says: To raise the percentage of women in the construction industry from the low single digits, and to increase respect for the work Building Tradespeople do.

“I’m ‘passionate about the Trades and changing the numbers,’” she says.

A lot of times, she adds, the work they do is inside walls, so “you never see the beauty of the water supply we built.”

The classes start with the history of the Building Trades – plumbing, for example, goes back to ancient Egypt.

Cassidy also speaks about the benefits of being in a Union, how it “has changed my life from growing up poor.”

Not every girl who attends a workshop is going to pursue a career in the Trades, she says, and she doesn’t want to compete with job-connection organizations like Nontraditional Employment for Women, but even if all they come out with is not being afraid to work with tools or knowing enough about mechanical things so they don’t get cheated, she feels like she’s accomplished something.

“I ‘also like teaching girls about the Trades because it gives them confidence,’” she says.

After she taught a group of Girl Scouts on Staten Island, “it ‘warmed my heart to hear them say it was the best class I ever had.’”

That’s confidence she hasn’t always had, she says.

Cassidy, who immigrated to the U.S. 26 years ago, was one of the first three women to study plumbing at what’s now the University of Trinidad and Tobago, but was unable to find work there.  She worked as a nanny and housekeeper before getting into the Plumbers’ Apprenticeship Program.  She was one of the first women Members of Local 371 in Staten Island.

She now wants to expand Tools and Tiaras to a summer camp where girls aged 6 to 19 can get hands-on experience, but that will take money.

She’s frustrated that it’s a lot easier to find donors who will fund teaching girls computer coding than ones who will help pay for teaching them construction skills.

“I think that’s a ‘disservice.’  ‘They’re equally important,’” she explains. “They ‘need’ a building to do the coding in (and that means they need Electricians to install the wiring and data cables, Plumbers to put in the fire sprinklers, and HVAC mechanics to connect and maintain the air-conditioning system that keeps the servers cool).  ‘The cloud is a place.’  ‘It was built by Tradespeople.’”

To Directly Access This Labor News Story, Go To: http://laborpress.org/tools-and-tiaras-teaching-girls-construction-basics/