Unionists Rally Outside New Era Field To Protest The Closure Of The Pro Sports Cap Makerâs Local Production Facility, âLament How Farâ Owner Christopher Koch âHas Fallenâ - âBoth In Their Eyes & The Eyes Of The Communityâ 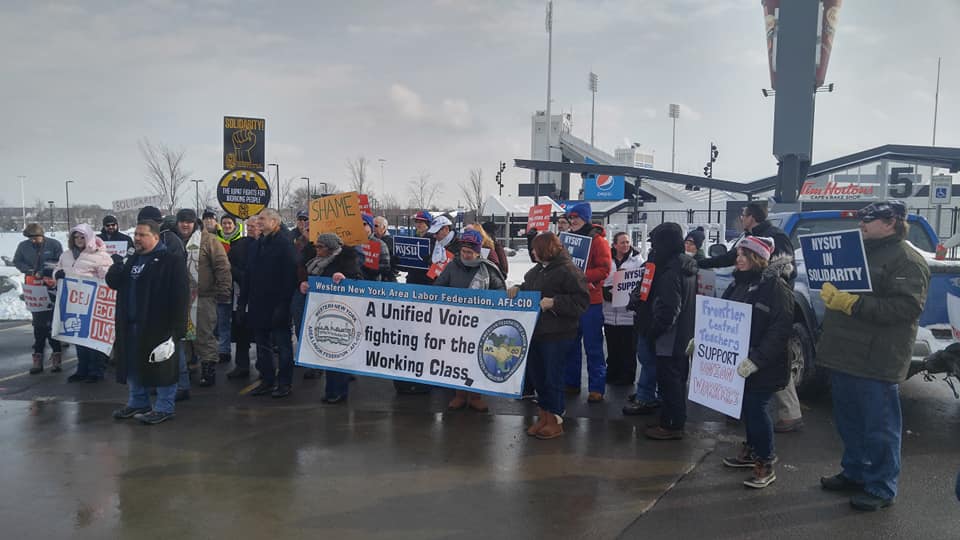 (ORCHARD PARK, NEW YORK) - Christopher Koch, whose family owns the world-renown New Era Cap Company, was a product of the Lake Shore Public School System and has been proudly recognized on the school’s Wall of Fame for his and his Buffalo-headquartered professional sports cap manufacturer’s growth and stature in the industry.

However, those who rallied outside New Era Field in Suburban Orchard Park on Saturday (January 26th) - the home of the National Football League’s (NFL) Buffalo Bills, where New Era spent millions of dollars several years ago to obtain its naming rights - questioned Koch’s loyalty to not only the Western New York Community in the wake of New Era’s announcement his company is closing its Derby Plant, but to his own roots and to those who’ve celebrated and admired his and New Era’s rise to the top over the years.

Just before Thanksgiving, New Era announced it would shutter its Derby manufacturing plant in March (2019), which is located just south of the City of Buffalo and has been in operation since the 60s, although the company has roots in the community dating back to the 1920s.

The closure will result in the layoff of 200 Workers, the majority of which are represented by the Communications Workers of America (CWA).

And, what has further stung the Union Community - New Era also announced it decided to move the operation down south to Miami, where the cap stitching work will be done by Non-Union Workers. 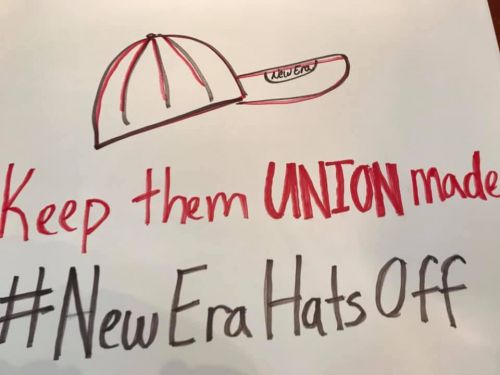 “Chris Koch was a Lake Shore student and he’s on its ‘Wall of Fame,’” Michele Amoia, Political Action Coordinator (PAC) Coordinator for the Lake Shore Central Teachers Association (LSCTA), which is affiliated with the New York State United Teachers (NYSUT) Union, told WNYLaborToday.com before the rally.  “We ‘all look at him as a local celebrity, but we are very confused and devastated why he would choose to not want to put his stamp on his product where he grew up and started the company.’”

“We’re looking at the impact ‘this is having on the community with the lost jobs and the many families it is affecting.’  The impact ‘that it will have on businesses in Derby.’  The ‘biggest’ employers in Lake Shore are the school district ‘and’ New Era.  ‘And what makes it worse is that now that the tax abatements the company had received are expiring, this decision was made,’” Amoia told Your On-Line Labor Newspaper, alluding to a take the money and run decision.

Amoia was among dozens of Western New York Union Leaders and Representatives who joined with representatives of several community groups - including the Coalition for Economic Justice (CEJ), and elected officials outside the NFL Stadium in a continued and further show of solidarity with New Era’s soon to be displaced Derby Employees. 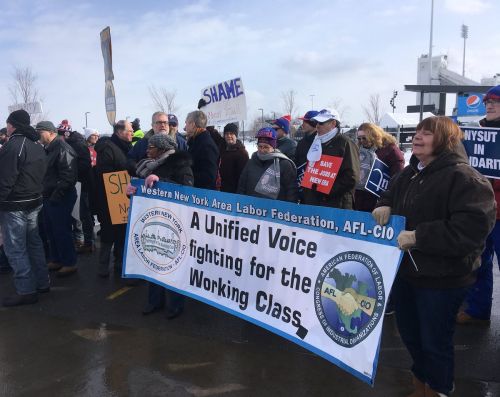 West Seneca Teachers Association President Joe Cantafio - who also serves on NYSUT’s Statewide Board of Directors and is an Executive Board Member of the Western New York AFL-CIO Area Labor Federation (WNYALF) - spoke to WNYLaborToday.com before the rally too, telling Your On-Line Labor Newspaper: “This is one of the ‘most important things that we have to stand up for.’  There is ‘no other compelling reason (for New Era’s plant move other) than ‘more profit.’  ‘They are putting profits over people.’  This is not about ‘competition.’  It’s ‘about dollar signs.’  They are ‘greedy.’”

Described as a “shameless act of betrayal and abandonment” on the part of New Era, the plant closing “will be devastating not only for the Workers, but also for the Towns of Derby and Evans, and surrounding businesses, whose viability depends on the plant.” 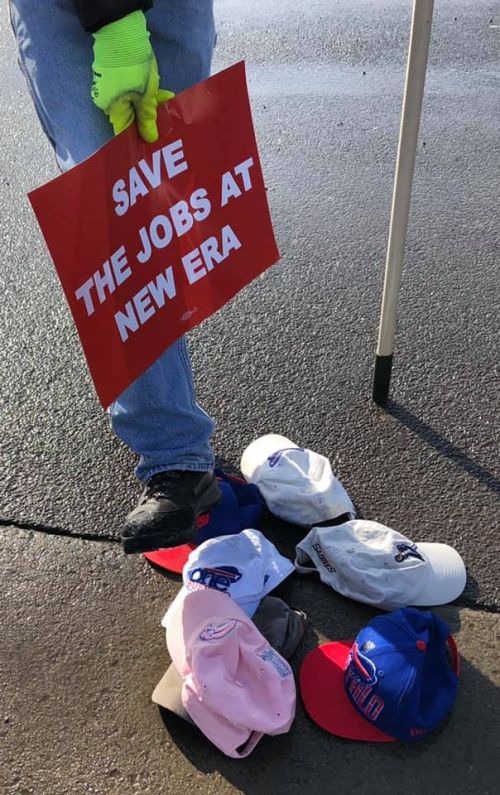 “This is a ‘slap in the face’ to Western New York, not to mention the affected Workers and their families, as well as to Derby, ‘which makes it even worse.’  NYSUT has (40,000) Members in Western New York ‘and we will work our asses off to put pressure on New Era to not see this happen,” Cantafio said.

Speaking to WNYLaborToday.com from Florida, WNYALF President Richard Lipsitz - who has been at the forefront of leading the charge to keep New Era’s plant and jobs in Derby, told Your On-Line Labor Newspaper: “There’s ‘no other reason for this other than to bust the Union.  The Western New York Labor Movement will continue to fight this move.  ‘We will not fold.’  ‘We will continue this struggle to save these jobs.’” 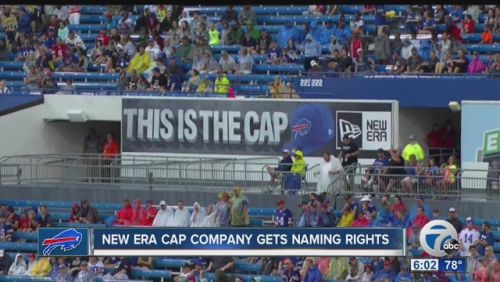 During the rally, Cantafio said when Bills’ Owners Terry and Kim Pegula stepped in and took ownership of the troubled NFL franchise, they did so to protect “the home team” at a time when the Bills were in danger of being relocated to a new city.

Now, Cantafio said the “home team” that needs to be saved is made up of New Era Workers, whose very livelihoods are at stake.

CEJ Executive Director, the Reverend Kirk Laubenstein, also spoke at the rally and said: “Shame on New Era.  They should change the name of this stadium to 'Union Busting Field.'”

And WNYLaborToday.com’s  January 10th Labor News Report, Headlined: “We’ve Got Your Back” - Unionists & Elected Officials Tell New Era Cap Workers As Those Concerned Rally Outside Derby Manufacturing Facility In A Continued Effort To ‘Put Pressure On’ The Company To Change Its Plant Closing Decision.

And For More On Saturday’s Rally, Go To: www.nysut.org/news/2019/january/buffalo-unionists-fight-to-save-the-home-team-new-era-cap-workers

Thanks to NYSUT’s Matt Smith for additional rally information that appeared in this Labor News Report, as well as the rally photos that were supplied to WNYLaborToday.com via NYSUT Social Network Facebook Page and from Civil Service Employees Association (CSEA) Member Steve Szymura.