Get Piping: Applauding Construction Unions For Taking A Different Tack When It Comes To Marketing Opportunities For Women In The Trades 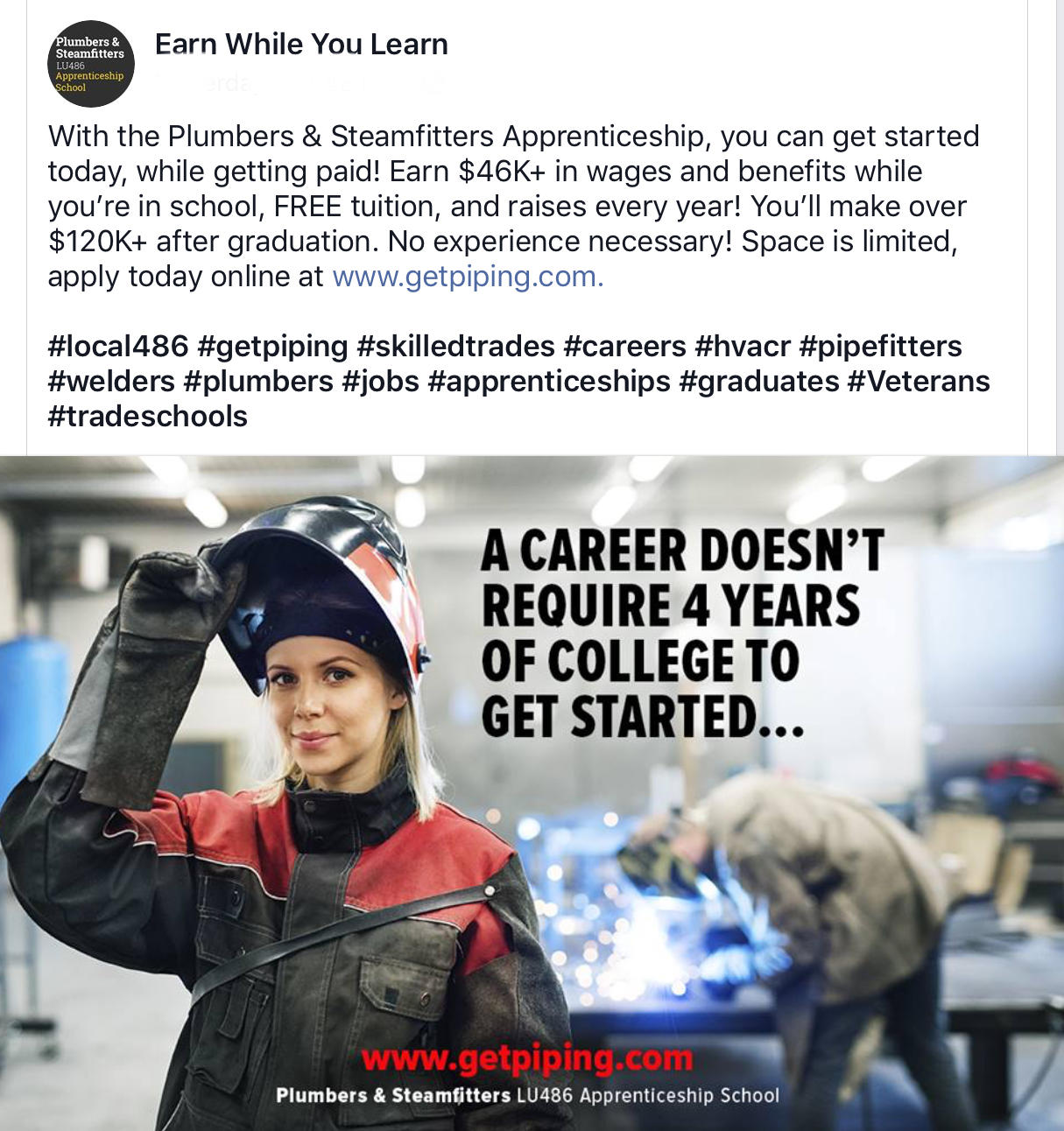 WNYLaborToday.com Editor’s Note: It’s refreshing to see the Unionized Building Trades taking a different tack when it comes to offering new marketing opportunities to attract Women to a life-long career in the Unionized Trades.  Case in point above, an advertisement from Plumbers and Pipefitters Local Union 486 in Baltimore, Maryland - and below, a Labor News Story from Rockford, Illinois where Plumbers and Pipe Fitters Local 23 are following suit.  Kudos to both!

(ROCKFORD, ILLINOIS) - Of the 100 people in the Plumbers and Pipe Fitters Local 23’s Apprenticeship Program, only six of them are Women.

“Unfortunately, the stigma is that construction ‘is not for’ women,” Greg Harle, the Training Director for the Plumbers and Pipe Fitters Local 23, says.

But, Plumbers and Pipe Fitters Local 23 - along with several other Local Unions say they are on a mission to break that stigma.

Maria Gamez is one of those handful of Women making her way through the Plumbers and Pipe Fitters Apprenticeship.  She says she worked in an office for eight years and decided a job behind the desk wasn’t for her.

The Union says it wants more people like Gamez to get involved, so it started changing how it recruits people into its program.

“I ‘like the physical aspect of it,’” Gamez says. “I grew up in a place where we were always outdoors, so that’s something that attracted me with construction.”

Some of those changes include physically putting more Women on commercials and brochures – and changing how it sells those jobs to recruits by changing how it describes the jobs.

In the past, the group says it would talk about the physical labor.

Now, it’s focusing on the training and skills it can provide to Women.

To Directly Access This Labor News Story, Go To: https://wrex.com/category/2019/01/09/local-unions-switch-up-marketing-to-attract-more-women-to-the-trades/?fbclid=IwAR2lvkGpkNKzwu7U3Cns8Ps8O-dfMRVH0VJCX5yWVLo6E2YvwTyQ2cVUtfI