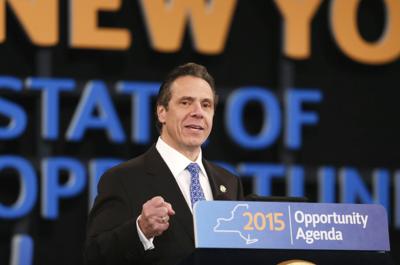 In a late-December speech in New York City, Cuomo asked State Lawmakers to enact what he called “a suite of ambitious proposals to ensure the promise of full, true justice for all, including Economic Justice, Social Justice and Racial Justice.”

Cuomo laid out his policies even before his annual State of the State address to the legislature in the Nation’s fourth most-populous, but most-unionized, State.

“We declare independence from this Federal Government's policies.  We disconnect from the nationalism, and the racism, and the chaos, and the xenophobia, and the misogyny, and the discrimination, and the dissembling of this Washington Administration,” he declared.  "We proclaim our Federal Government's policy not only regressive, not only repugnant to New York values, we declare it un-American.  Let us pass this ambitious progressive agenda as New York's restoration of true democracy, restoring fairness, progress and pride."

That agenda includes protecting New York’s Workers against Trump’s attacks on their rights.

“While the Federal Government is waging an all-out attack on the Labor Movement in both the Public and Private Sector and seeks to undermine the right to organize and collective bargaining, Governor Cuomo believes that the Labor Movement is a force for Social Justice and the Middle Class,” a fact sheet accompanying his Ellis Island address said.  “The governor will expand the Janus protections’ announced last year for State Workers to cover Public Sector Labor Unions at the local level and ensure Workers have Labor Rights in the gig economy,” the fact sheet added.

It gave no details.

New York State AFL-CIO President Mario Cilento, whose Statewide Labor Federation strongly backed Cuomo’s re-election last year, praised that section of the speech.  “(Cuomo) ‘recognized a strong Labor Movement is the key to building’ the Middle Class,” Cilento said. “We ‘applaud’ the Governor for ‘doubling down on his commitment to ensure working people are treated fairly’ in our great State.  Not only did the Governor ‘vow to protect all’ Public Employees in Labor Unions, including those who work for local governments - he ‘recognized the need to address the emerging gig economy to ensure Workers have the basic rights all Working Men and Women deserve.’"

Other parts of Cuomo’s agenda include a progressive tax system, featuring a “Millionaire’s Tax” and a cap on “regressive” property taxes at 2% of assessed valuation.  He also wants to enshrine the Affordable Care Act’s health care protections statewide, codify protection of reproductive rights and have solons ratify the Equal Rights Amendment.

And his agenda includes a State-level Dream Act, a $150 billion infrastructure plan - which would employ thousands of Union Construction Workers - and the “Green New Deal,” a cause of the United Steelworkers (USW), several other Unions and progressive groups, to re-invigorate manufacturing by emphasizing plants that build “green” products, such as solar panels.

Unlike in prior years, Cuomo might actually get lawmakers to approve his plans.

That’s because the Democratic - and especially progressive - landslide in the Nation’s fourth most-populous state last November not only swept Cuomo and his running mates back into the State Capitol Building in Albany, but swept out Right-Wing/GOP control of the State Senate for the first time in decades.