Federal Workers In New York City Blast Trumps Government Shutdown: Mister Art Of The Deal Seems Unable To Come To The Table And Have A Serious Talk. 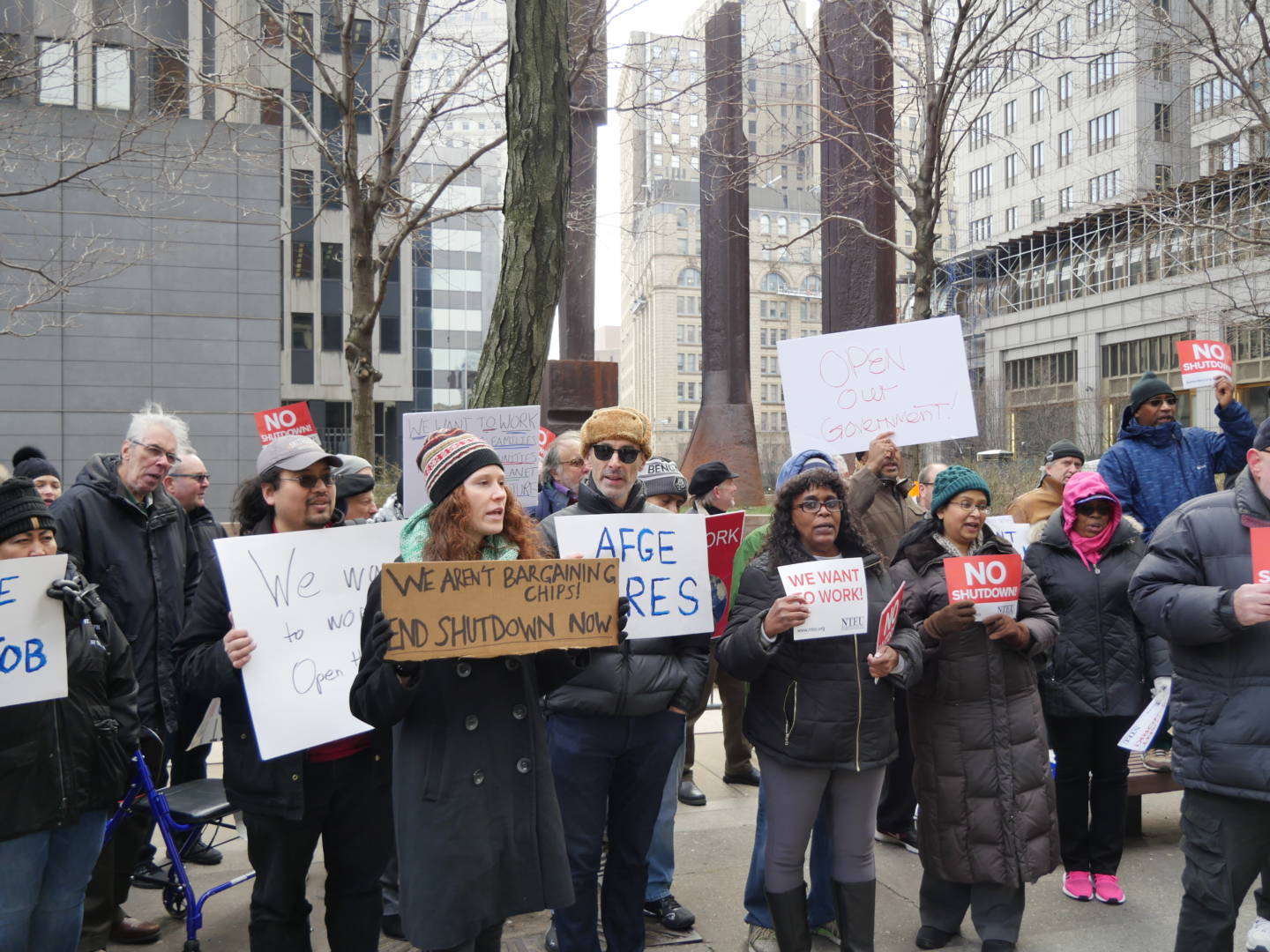 (NEW YORK CITY) - Try as they might, Federal Workers tasked with securing U.S. borders simply cannot understand how kneecapping their agencies in an effort to force Congress to pay for a border wall no one believes will stop illegal immigration, serves the public good.

“It ‘doesn’t make sense’ to shut down the agencies ‘that are protecting the American public in order try and protect the American public’,” Maribeth Dunajski told LaborPress earlier this week. “And it is ‘costing the taxpayers big time.’  It’s ‘not saving anybody money’ – ‘it’s costing extra money to do the shutdown.’”

Dunajski, was among of about 100 Members of the National Treasury Employees Association (NTEA) and American Federation of Government Employees (AFGE) who turned out this week outside the Internal Revenue Services’ (IRS) offices at 290 Broadway to protest Republican President Donald Trump’s government shutdown - now heading into its fifth week.

“I have ‘not worked for twenty-six days now,’” the Veteran National Import Specialist with the U.S. Customs Border Protection said. “We ‘want’ to do our jobs.  ‘It makes no sense to me that the people who are protecting the border - protecting commerce - are not allowed to do our jobs.’”

“That revenue ‘is not being collected’ and laws and regulations ‘are not being enforced,’” Albi said.  “Commerce ‘is being injured during the time we are out.’  ‘Even when we go back, it will probably be almost impossible to make up for the lost productivity.’”

U.S. Customs & Border Protection Employee and Bronx resident Ebbe Manczuk stopped short of calling for Trump’s impeachment - but said the chief executive’s decision to shut down government agencies and deprive as many as 800,000 Federal Employees a paycheck - “is offensive.”  “It’s ‘uncaring’ of a leader ‘who’s sworn in to take care of everyone,’” Manczuk said. “To ‘withhold’ the paycheck of ‘regular Joes for what you want’ – ‘which has more to do with your base’ – ‘and not encompassing everyone is not fair.’  ‘It’s not right.’”

This August, Manczuk will mark her 24th year in border protection.  The married mother of a nine-month-old said she and her Co-Workers are inherently concerned and committed to border security: “At this point, I feel (Trump) ‘needs to revisit his vision or his plan’ for this wall.’  ‘It’s not that we are out here unconcerned about border security - we are concerned about border security, but there are ways of going about achieving things.’  And ‘part of being in a leadership position is being able to compromise - being able to have a conversation.’ ‘Mister Art of The Deal’ seems, apparently, ‘unable to come to the table and have a serious talk.’”

To Continue Reading This Labor News Report, Go To: http://laborpress.org/federal-workers-blast-govt-shutdown-it-makes-no-sense/