Several Individual Unions & Their Members Are Presented With Awards, Including WNYLaborToday.com, Which Was Presented With The Councilâs Presidentâs Award 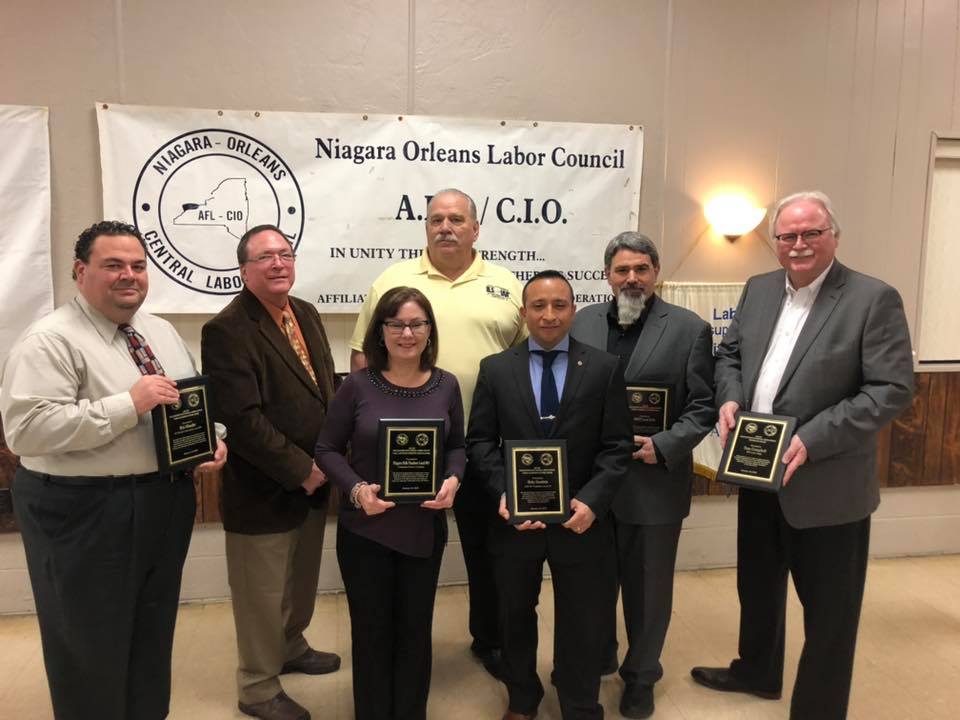 (NIAGARA FALLS, NEW YORK) – If you were at the 2019 Niagara-Orleans AFL-CIO Labor Council’s Annual Awards Dinner up in Niagara Falls Wednesday (January 16th) evening, you would have heard a theme that was underscored by several speakers: Labor must work hard to get out the vote - and in the process, get more and more Labor Leaders and Union Members to run for public office if things are to truly change for the better for Working People.

Several Unions and their Members were also presented with individual awards during the festivities, including WNYLaborToday.com and Editor-Publisher Tom Campbell, which Labor Council President Jim Briggs presented its President’s Award to. 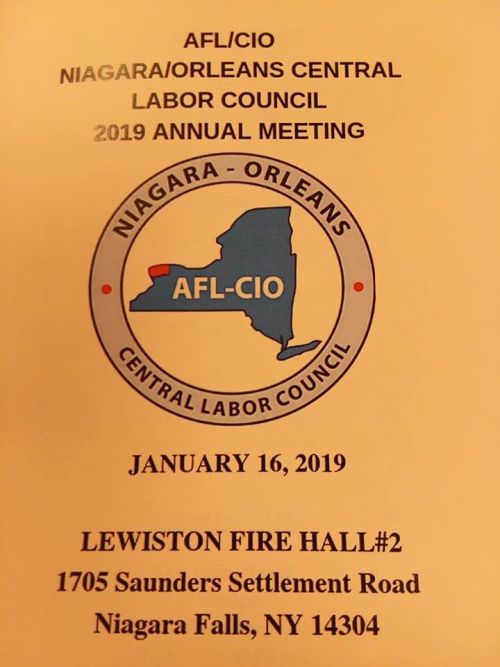 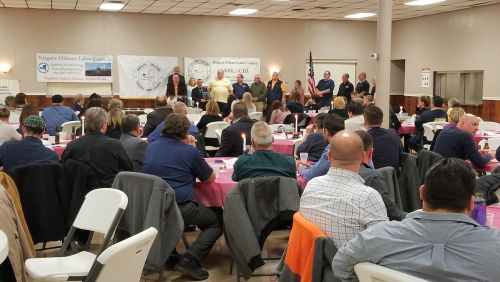 “We ‘need to work with’ the new Niagara County Democratic Chairman (Niagara County Legislator Jason Zona, who also addressed those at the dinner) ‘and provide him with candidates.’  ‘And we have to get off our asses and knock on doors and get them elected,’” a fiery Briggs (Pictured Below/WNYLaborToday.com Photo) told those Labor Leaders, Union Representatives and Friends of Labor in attendance.  “This is about what people ‘left us.’  ‘Now, we have to do this for the next generation.’  ‘We have to put more people back to work, so our children won’t be grabbing their suitcases and leaving the area.’  And we ‘need to change things in our own neighborhood’ and take that (successful) message ‘across the country.” 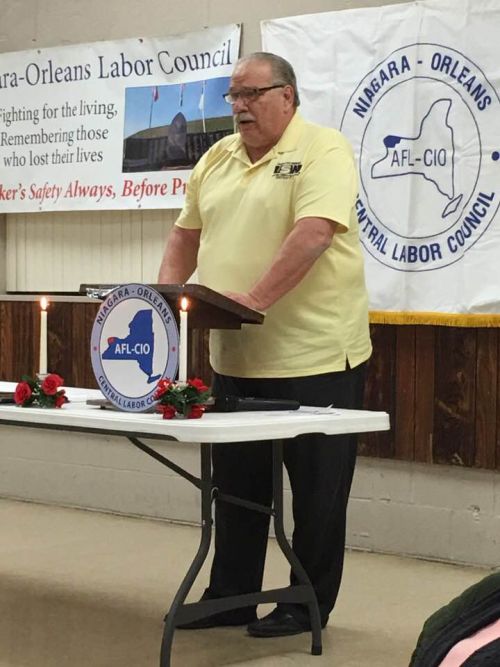 Both Scott Jones and Amanda Irons-Rindfleisch, who oversee the Niagara-Orleans Labor Council’s Political Action Committee, also spoke about “the need to get more and more” Labor Representatives involved and making the decision to run for public office, no matter what the position - school board, town, city or county government.

“We ‘need to be our own’ candidates,” Irons-Rindfleisch said.  “We can run for school boards and then ‘work our way up.’  So, ‘think about running and we’ll help take the (mystery) out of the process.’  ‘And remember,’ we ‘must vote.’  If not, ‘we’re fools.’”

United Way of Greater Niagara Labor Liaison Bill Jakobi (Pictured at the Podium/WNYLaborToday.com Photo) - who co-emceed the event with Briggs, took the time to list a number of positive efforts the Labor Council undertook and accomplished in 2018, ranging from the annual Labor’s Night at the Races Event that’s held at the Ransomville Raceway (which has raised more than $115,000 over the past 10 years to help benefit an array of programs administered by the United Way) to adopting 13 area families during the Holiday Season, “who would have not had a Christmas without the generosity of Organized Labor.” 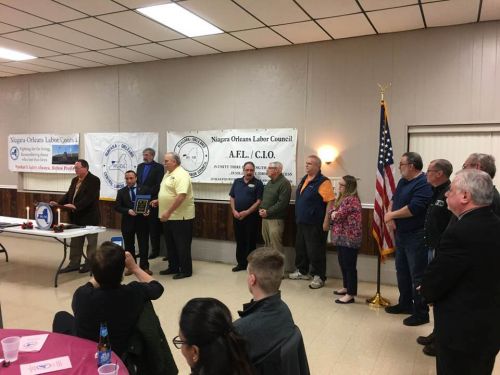 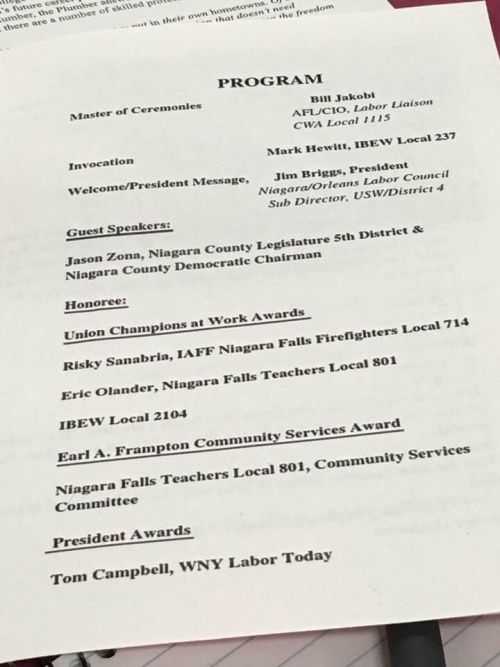 “It’s about ‘solidarity,’” Sanabria (Pictured Below/WNYLaborToday.com Photo) said after accepting the award. “If we are ‘all into it - together, we can succeed, and we owe that to our Members.’  ‘I will work as hard as I can to leave the Labor Movement in a little better place that I found it.’” 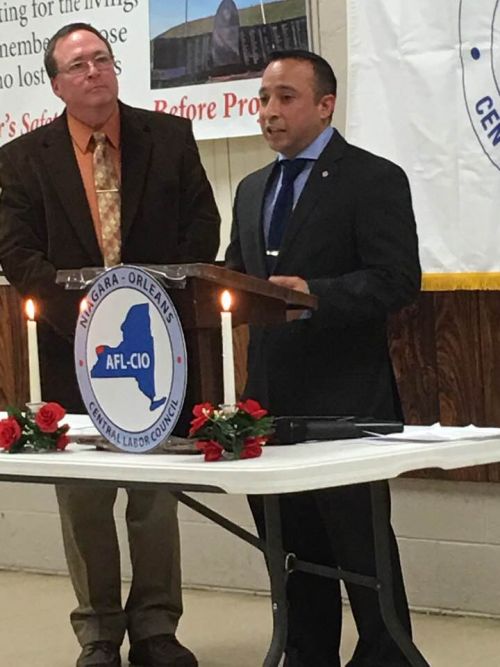 “I’ve been a Teacher for twenty years and I’ve ‘gotten involved, so please - get involved (and remember) that our votes are the biggest equalizer,’” Olander (Pictured Below/WNYLaborToday.com Photo) said. 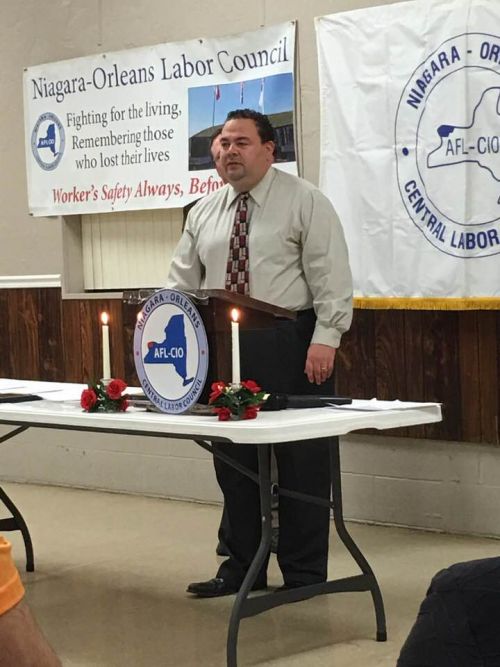 “We ‘need to work to turn this country around,’” Fazzolari (Pictured Below/WNYLaborToday.com Photo) said. “There’s ‘strength in numbers and if we show up, we will come out victorious.’” 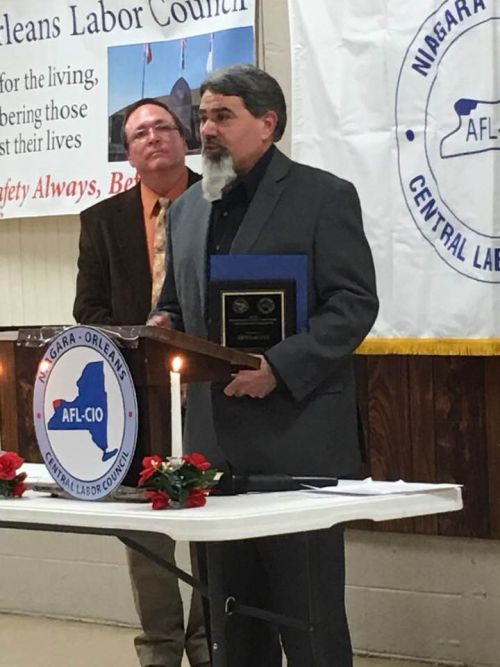 Frampton (Pictured Below/WNYLaborToday.com Photo), a long-time Union Activist who served in Union Positions with the Communications Workers of America (CWA), the Western New York AFL-CIO Area Labor Federation (WNYALF) and as the former Labor Liaison to the United Way of Greater Niagara, told those at the dinner that “Labor ‘is’ the face of the community.’” 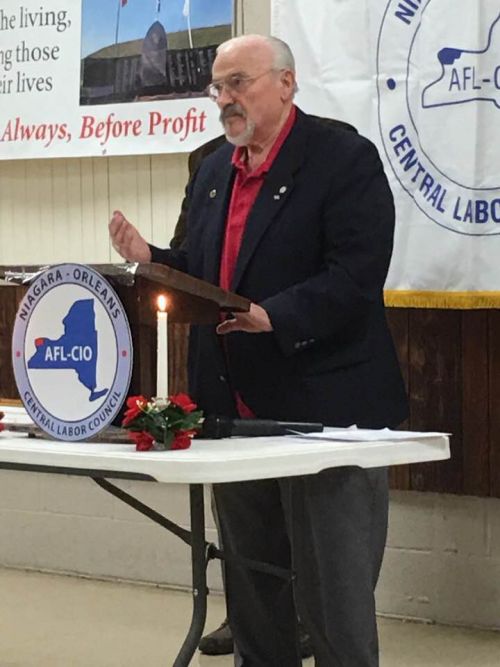 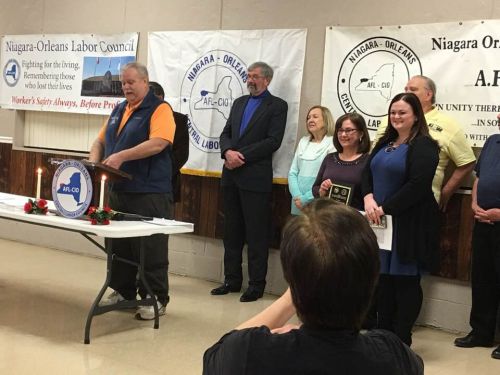 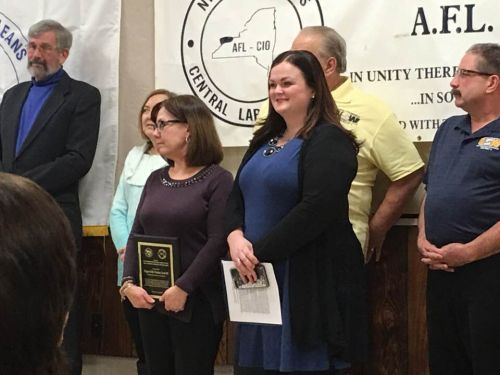 The night’s last award was presented to WNYLaborToday.com, which was the recipient of the Labor Council’s President’s Award.

“WNYLaborToday.com ‘provides’ area Labor Unions ‘the opportunity to get their message out - unimpeded,’” Labor Council President Briggs said.  “It ‘also serves as a communications tool for Organized Labor to combat a host of Anti-Union rhetoric and misinformation due to the fact the Labor Community gets very little news coverage from daily newspaper, radio and TV.’  This award is to ‘show our appreciation for (WNYLaborToday.com’s) years of dedication to the Labor Movement in Western New York and the continuous coverage of the issues that affect Labor, its Members and the communities where we work and live in.’”

Editor-Publisher Tom Campbell (Pictured Below/WNYLaborToday.com Photo) accepted the award and thanked the Council and its Executive Board for such a “gracious honor.” 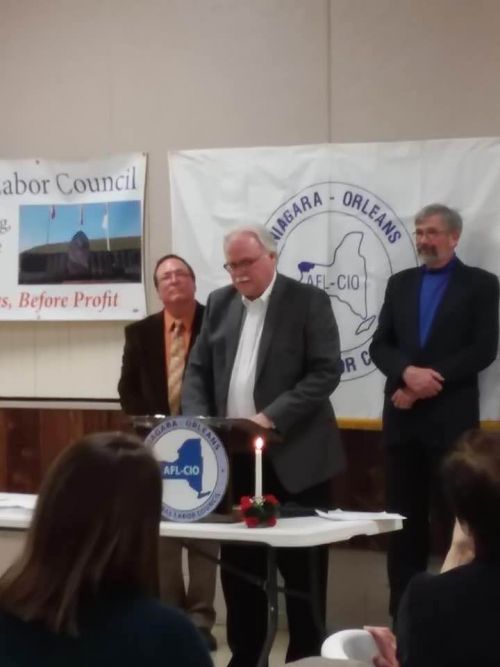 “Without ‘your’ support, there would be ‘no’ WNYLaborToday.com,” Campbell told those in attendance, thanking more than a dozen individual Unions and several advertisers for their continued support over the 11 years that Your On-Line Labor Newspaper has been in existence.

After pointing out a number of Labor News Stories that WNYLaborToday.com has covered over the past year - including many positive stories of Organized Labor beating back Right-To-Work (for less) efforts, impactful Teacher Strikes across the United States and Labor’s successful efforts to help take back the U.S. House of Representatives and help Democrats win control of the New York State Assembly, Senate and Governor’s Office, Campbell said: “Stories like these, here in Western New York, across New York State and across the Nation, ‘need to be told - and I’m honored to be Labor’s Storyteller.’  ‘For without WNYLaborToday.com, who would tell them?’” 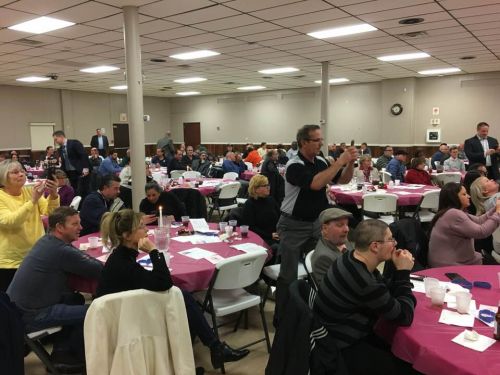 Among those attending the annual Niagara-Orleans Labor Council’s Awards Dinner were representatives from Western New York’s only Union -Represented Health Care Provider - BlueCross BlueShield of Western New York, which is also a major advertiser on WNYLaborToday.com.  In addition, BlueCross BlueShield is also a major sponsor of the Labor Council’s annual Labor’s Night at the Races Event.