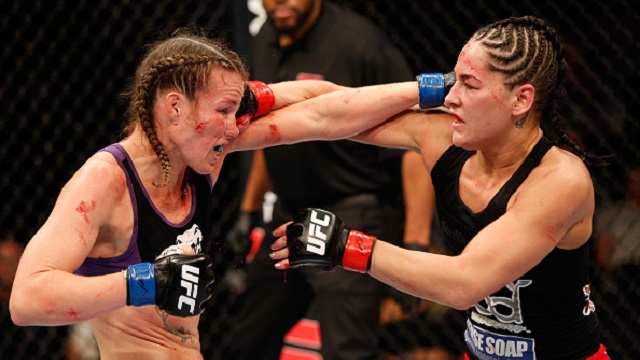 “Nobody should have to sacrifice their dignity pleading for basic rights.  But sadly, due to Worker Misclassification, many Working People don’t have access to employer-sponsored health insurance, fair pay, Workers Comp and, most importantly, Collective Bargaining Rights.” - With that strong comment, Mixed Martial Arts (MMA) fighter Leslie Smith exposed a sport that has many Trade Union spectators when she recently announced that she was technically fired by Ultimate Fighting Championship (UFC) - the largest MMA promotion company in the world with a net worth of $7 billion - for endorsing collective bargaining.

As she put it: “I spoke up in favor of joining in Union with my fellow MMA Fighters.”

Smith spent the last four years fighting under the UFC banner.  Her contract expired in the Summer and instead of renewing it, the UFC declined, making her a free agent.

“Before I was fired, I was on a three-fight win streak in my division, ranked ninth in the world, and had won my last fight by technical knockout, “ she said, adding UFC “had even recently presented me with the ‘Fight of the Night’ Award for exceptional fighting skills.  But this all changed when the UFC effectively ended my fighting career ‘because I spoke up in favor of joining in Union with my fellow MMA Fighters.’  The UFC ‘misclassifies’ Fighters as ‘Independent Contractors, so we don’t have access to’ Collective Bargaining Rights.  This means ‘we can’t negotiate for more control over our careers or a legitimate share of the revenue we’re generating.’”

While Fighters make $12,000 a match, they take a brutal beating, have no benefits, no health insurance and no share of the substantial revenue generated at each fight program.  So, it’s not like the $7 billion UFC enterprise could not afford to be fair with its Fighters, Smith said.

Smith sued the UFC for unfair retaliation.  National Labor Relations Board (NLRB) Region 4 upheld her charges but the Republican-controlled National NLRB overturned the Region 4 decision with the flimsy excuse Smith was not specifically discriminated against for her Union work, therefore the charge was not warranted.

Never one to back down from a fight, Smith is continuing her organizing work: “Fighters ‘need’ a Union.  ‘I look forward to a future where we can all succeed without exploitation.’  I have been ‘one of few’ UFC Fighters ‘to publicly speak in favor of a Fighter’s Union.’  I recently launched Project Spearhead, an organization that is ‘currently collecting’ Authorization Cards from UFC Fighters to file with the National Labor Relations Board.”

But, Smith noted, there are extensive legal costs involved.  A GoFundMe page has been created to help with Smith’s legal fees (To contribute, go to gofundme.com/leslie-smith-legal-defense).  As of January 7th, some $5,510 had been raised towards the $20,000 goal.

To Directly Access This Labor News Report, Go To: https://labortribune.com/mixed-martial-arts-fighter-fired-for-fighting-for-a-union/?fbclid=IwAR1fdx2J_wzSIwM8nr7-AK8nu0LgKQfxIrkpSv-MjbouZRQDByUV-ZvWtI0

And for more information, there are two videos on-line: The first features Smith talking about her struggle before an Economic Policy Institute (EPI) audience. It can be found at epi.org/november2018/research-power-justice-videos; The second is a Full Frontal with Samantha Bee interview and can be found on YouTube at youtube.com/watch?v=kdo0Bxz-hOo.

Wow! The contents of this article are 'damn interesting and one never to be learned' through the local news media. Thank You! WNYLaborToday.com for your research and sharing. 'My Best' to Fighter Leslie Smith and for her to 'stand strong to fight the fight for so many.' The Actor Sylvester Stallone 'said it best' in his final Rocky movie - 'Rocky Balboa,,' "It's not how hard of a punch one can throw but how hard of a punch one can take but remain on their feet and continue to fight." Posted by Dan Boody on January 15, 2019 at 7:08 pm