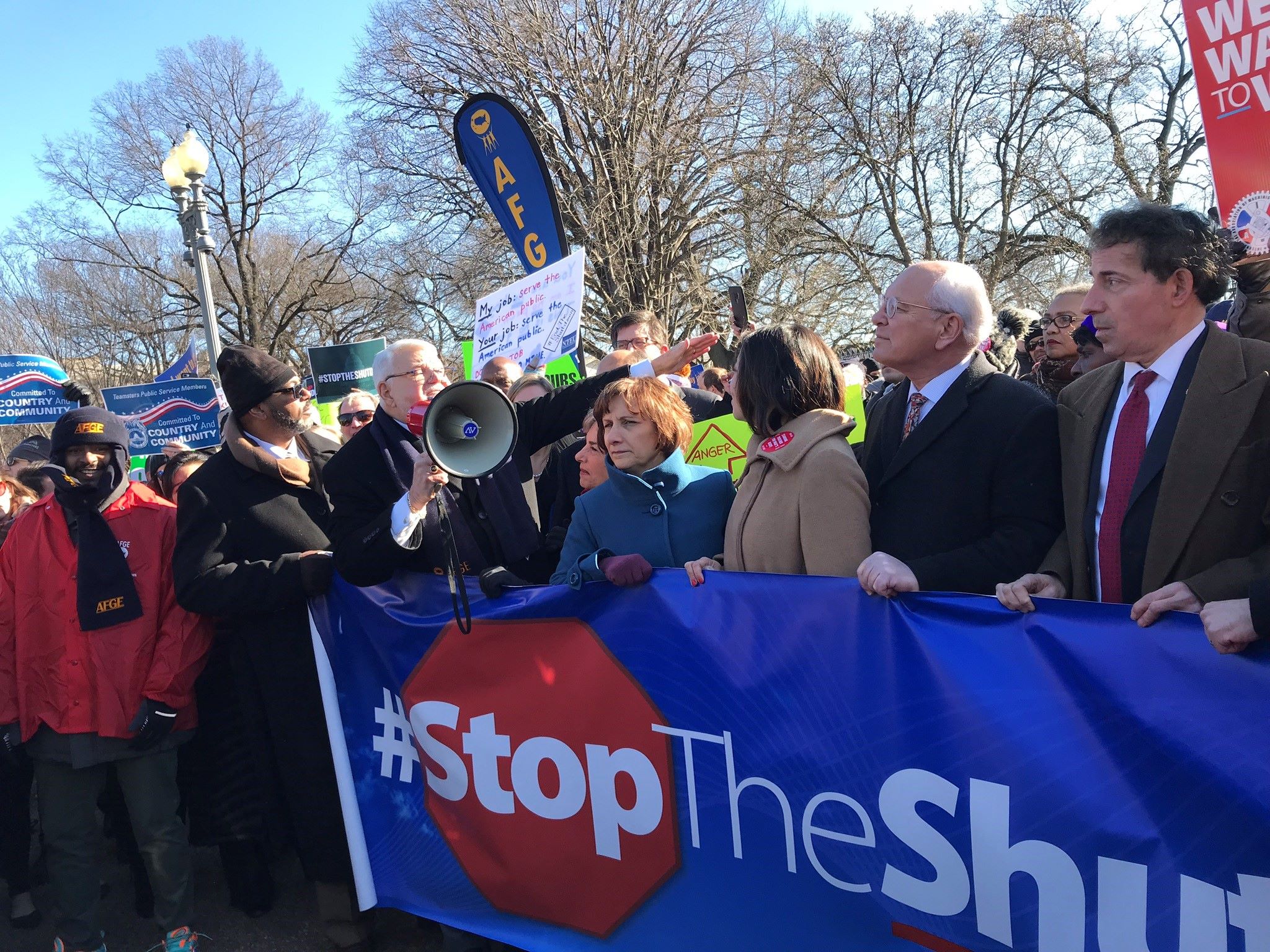 (WASHINGTON, D.C.) - With denunciations ranging from “shutdown” to “lockout” to - one speaker in Washington, D.C. said - “shakedown,” Workers and their allies rallied to blast Republican President Donald Trump’s closure of a large hunk of the Federal Government and his denial of pay to 800,000 Workers.

The sharp criticism in rallies during Wednesday evening (January 9th) in the D.C. Suburb of Silver Spring, Maryland, two more in the Capital City on Thursday (January 10th) and elsewhere that across the country that day - including in Chicago and Kansas City – which all came as Trump’s lockout stretched into its 20th day, and after the petulant GOP President stormed out of a meeting with Congressional Leaders that he called the day before to discuss the issue.

At that session, Trump bluntly asked House Speaker Nancy Pelosi (Democrat-California) if Democrats would agree to his $5.7 billion demand for money to build a Mexican Wall in return for ending the lockout/shutdown.  Pelosi said “no,” and Trump marched out.  Senate Minority Leader Charles Schumer (Democrat-New York), who also participated, called Trump’s action “a temper tantrum.”

Meanwhile, replying to Trump’s prior claim that unpaid, locked-out Workers could “make do” or ask their parents for money, Pelosi later retorted that, unlike Trump, their parents didn’t have millions of dollars to lend.  Trump’s late father, Fred, gave him millions to get his development business going.

Speakers at the rallies, including several of the locked-out Workers, made the point they want to go back to work for everyone in the country, in jobs ranging from meat inspection to airplane safety inspection to working at national parks to researching cases for U.S. Supreme Court briefs - but they want respect and they want to get paid.  Trump, speakers said, refuses both.

“At age seventy-one, ‘I need a job,’” Lila Johnson, a 21-year Contract Worker at the Agriculture Department, told the D.C. crowd of several thousand that gathered in front of the National AFL-CIO before marching two blocks to the White House.  “But ‘until we start fighting back, that won’t get done.’ (Trump) ‘don’t want to do it.’”

Contract Workers like Johnson - such as Janitors and Fast Food Workers at malls in federal buildings - get no back pay even when the shutdown ends.  In past Republican-caused shutdowns, regular Workers later got back pay, though some had to sue for that, too.

“Open the government and ‘end this unnecessary and shameful shutdown’,” U.S. Senator Chris Von Hollen (Democrat-Maryland) told the AFL-CIO crowd.  “Every Federal Employee ‘has done their job, but the White House has not done its job,’” added U.S. Senator Mark Warner (Democrat-Virginia), one of a parade of lawmakers who alternated with Union Leaders and Rank-and-File Locked-Out Workers at the AFL-CIO podium. 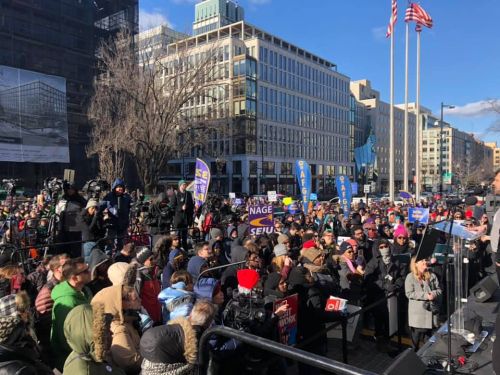 At midnight on December 21st, Trump shut the Interior, Justice, State, Treasury, Commerce, Housing and Agriculture Departments, among others - plus the Environmental Protection Agency (EPA) and other key agencies - which lack money.  Trump won’t sign their money bills unless Congress kowtows to his Mexican Wall money demand.  As a result, some 800,000 Federal Workers, plus three times as many dependents, face payless weeks or months.  But Trump forced about half of them to work, anyway.  They’re “essential,” but their pay isn’t, they said.  The ejection of half of the Workers led National AFL-CIO President Richard Trumka, in his speech, to declare the shutdown was a management - Trump - lockout.

Trump wasn’t in D.C. to hear the Workers’ chants and protests.  He spent part of the day visiting a section of the border in McAllen, Texas, for what even he called a “photo-op.”  The Texas ACLU and various local Latino groups mounted an anti-wall, anti-shutdown protest there.

Meanwhile, back in Washington - several speakers added Senate Majority Leader Mitch McConnell (Republican-Kentucky) to the list of culprits, citing his absolute refusal to even allow solons to vote on House-passed money bills to reopen the government while continuing talks about funding Trump’s wall.  Those money bills are identical to legislation bipartisan majorities approved just before December 21st.  Trump agreed, then reneged.

“Senators, Senators, ‘do your damn job!,’” declared J. David Cox, the President of the largest Federal Workers Union, the American Federation of Government Employees (AFGE). “Don’t be ‘scared’ by the President of the United States.  ‘You were elected in your own right.’  ‘We’re here to tell Mitch McConnell to stop hiding from reality.’” 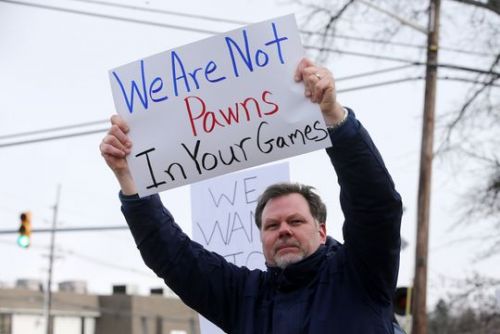 But Trump was the main target of the speeches, chants and signs, and not just from Union Leaders such as Cox, Trumka, National Treasury Employees Union (NTEU) President Tony Reardon and American Federation of Teachers (AFT) President Randi Weingarten, who called Trump’s lockout “hostage taking.”

Some of the sharpest words came from Jaime Contreras, a Service Employees International Union (SEIU) Vice President and President of its Mid-Atlantic Local of 32BJ, the Janitors’ Union: “From a military veteran who came here undocumented in 1998 (Contreras is now an American Citizen) ‘this message goes to our draft-dodger, our liar, our cheater and our racist: Shame on you!.’  ‘And the same thing goes for Mitch McConnell.’”

“This is a ‘lockout and it’s a lockout that belongs to Donald Trump,’” AFGE President Cox - a retired VA Psychiatric Nurse, said.  “I ‘know crazy when I see it.’”