This Is Why There Is A Fight For $15 And A Union Campaign: In The Aftermath Of A Viral McDonald's Fight, Workers Plan Strike To Demand Training, Protection From Violence 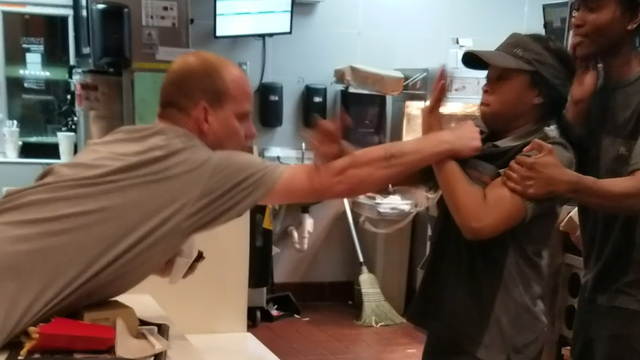 (ST. PETERSBURG, FLORIDA) - Laura Rollins won't work the drive-thru.  "Those girls get the worst of it," said the 66-year-old, who has worked at 10 different McDonald’s over 25 years.  The name-calling and sexual comments - she's seen women working the drive-thru deal with the worst customers.  She's seen sodas splashed into cashiers' faces and spit hurled at Workers in response to mistaken orders. Two years ago, she said a man jumped over the counter to grab a manager.

When Rollins saw the viral video taken last week inside a St. Petersburg McDonald's showing a 40-year-old man grab a young cashier by the collar and yank her across the counter, she said it was distressing.  It was also familiar.  That's why she stays behind the grill.

But today (Tuesday, January 8th) she's leaving her home in Fort Lauderdale to make her voice heard in St. Petersburg, where dozens of Fast Food Workers are expected to gather outside the McDonald's that employs 20-year-old Yasmine James, the cashier in the video who fended off her attacker with swift punches as he gripped her uniform.

Workers say they're leaving their posts behind grills, drive-thrus and cash registers at 11 a.m. in a Strike to demand the chain and others like it provide training for Employees and managers on how to handle violence in the workplace.

"Take the abuse, the disrespect, the harassment, all that stuff," said Rollins. "My father always said: ‘Bite your tongue, bite your jowls, suck it in. Do what you got to do to provide for your family.’"

The video taken of James and customer Daniel Willis Taylor, 40, inside the McDonald’s at 4595 34th Street S on New Year’s Eve has been seen by millions.

Taylor was agitated after he found no straws in the restaurant’s lobby - part of St. Petersburg’s new plastic straw ban.  After the fight began, several seconds passed before another Employee stepped in to help.  Through her attorney, James said that Black Women are too often left to fight for themselves.

Taylor, who is accused of kicking another Employee off camera, was arrested on assault charges.

McDonald's spokesman Khim Aday said the company is in the process of offering Employees counseling through an employee assistance program.  McDonald's has also hired an external investigator to look into the assault and is "reviewing how we respond to such incidents going forward."  "We will always stand with our people and remain committed to their safety and well-being," he said.

Organizers of the protest, who are with Wage Activist Group Fight for $15, say they want McDonald’s to “establish store security protocols, and provide protection and a voice on the job for its predominantly Black and Latina women workforce,” according to a news release.

“It’s very clear I’m not safe at McDonald’s,” Gail Rogers, a Tampa McDonald’s Worker, said in a statement released by organizers. "I’m going on Strike because at McDonald’s, we’re subjected to all types of behavior that has no place at work - from physical attacks and armed robberies, to sexual harassment, to racial discrimination."

The same group published a survey a year before showing 87% of Fast Food Workers suffered an on-the-job injury.

Rollins has grandchildren.  She worries about them looking for their first jobs.  What if it's McDonald's, Taco Bell?  "I want it to be different for them," she said.

To Directly Access This Labor News Report, Go To: www.tampabay.com/business/in-aftermath-of-viral-mcdonalds-fight-workers-plan-strike-to-demand-training-protection-from-violence-20190107/?fbclid=IwAR00hcLGvDgzCWBNI0RW9nqkIKxWufvk6_9tW4x8y_x2T26JTo9ImA9DLBU