A Tentative Agreement Has Been Reached To End The National Grid Lockout, 1,200 USW-Represented Workers Have Been Off The Job Since June 25th

(BOSTON, MASSACHUSETTS) - National Grid and the United Steelworkers (USW) have reached a tentative agreement to end a bitter contract dispute in Massachusetts that left 1,200 Union-represented Natural Gas Employees locked out of their jobs since June 25th.

The two Unions will present the terms of the agreement to their Members for ratification on or before January 7th.  Details of the agreement will not be shared before both Unions have had an opportunity to vote, the statement read.

In a hint of potential progress toward a settlement, the company and the USW indicated in a previous joint statement that it had agreed to a “firm schedule” for bargaining with the intention of reaching an agreement by last Friday, though that deadline was missed by several days. 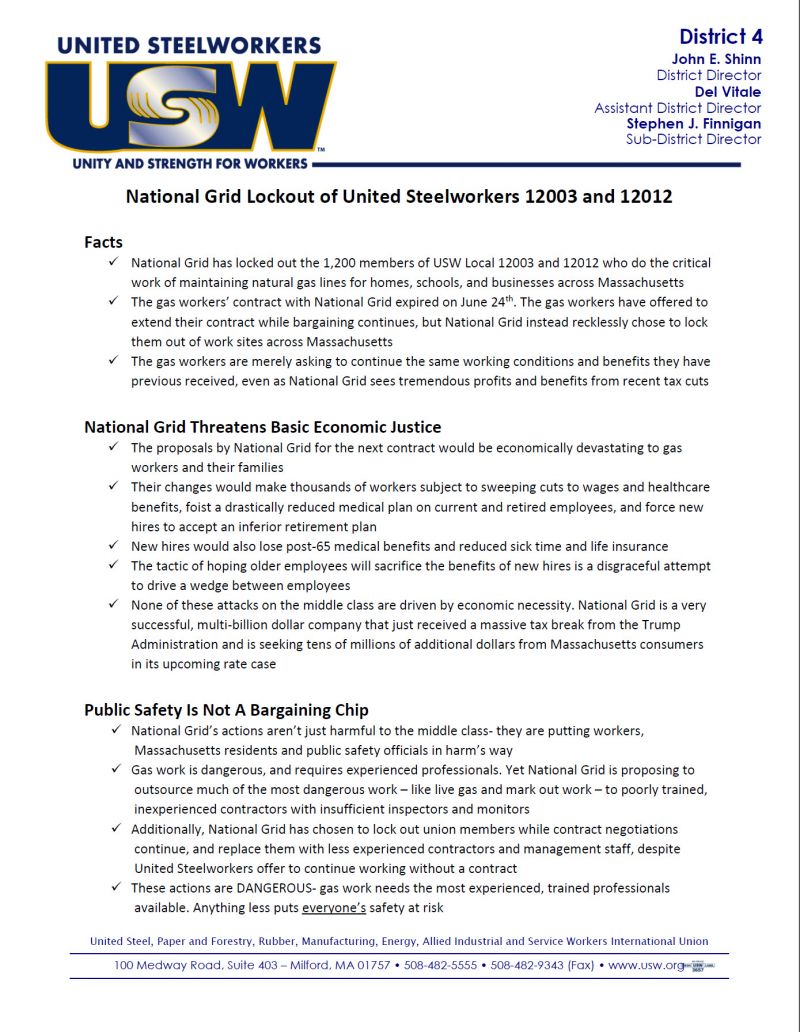 The Workers, including those who maintain natural gas infrastructure in National Grid’s Eastern Massachusetts service area, were locked out by the utility in July after a previous Collective Bargaining Agreement expired.

National Grid also serves customers in Rhode Island and New York, but Workers in those states were not affected.

The company said its proposals to shift certain health insurance costs to Employees and replace pensions with 401(k) plans for newly hired workers had been among the major sticking points.

Demands by public officials to resolve the dispute intensified following a series of natural gas explosions and fires that rocked three Merrimack Valley communities on September 13th, leaving one person dead, 25 others injured, and dozens of homes and buildings damaged or destroyed.

The disaster involved a different utility, Columbia Gas, yet heightened safety concerns about the National Grid network operating without hundreds of its most experienced Maintenance Workers.

The state Department of Public Utilities ordered a halt on non-emergency natural gas work performed by National Grid in October after a pressurization mishap during routine maintenance interrupted service to hundreds of homes in Woburn.  No injuries were reported.

To Read This Labor News Report In Its Entirety, Go To: www.boston.com/news/local-news/2019/01/03/national-grid-unions-have-tentative-agreement-after-lockout