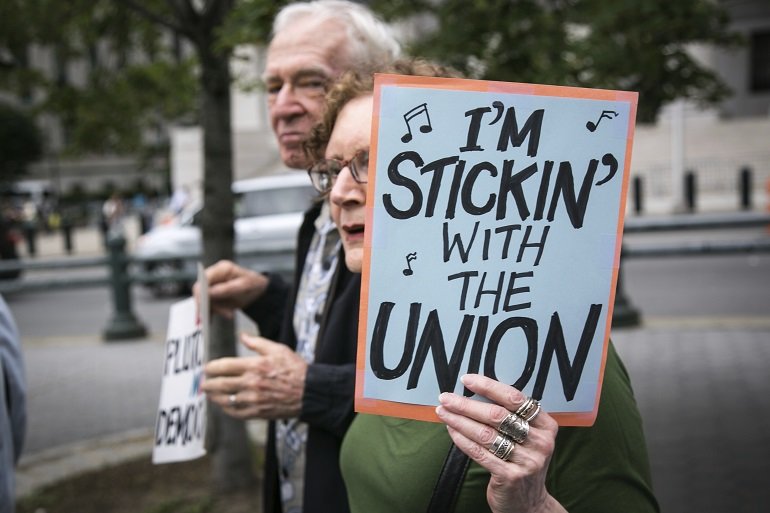 Five months ago, the U.S. Supreme Court dealt what was seen as a massive blow to Labor Unions in Janus v. AFSCME.

The Justices banned the collection of Union Fees from Public Workers who receive Union-negotiated benefits - but choose not to belong to the Union.

The ruling had an immediate negative effect on Union finances.

In Pennsylvania, for instance, refunding fees to Non-Members resulted in a roughly 15% loss of the $42.5 million that Unions collected from Executive Branch Members and Non-Members in 2017, according to that State’s Office of Administration.

The court’s decision also led many to predict that massive defections of Union Members would follow, but so far, even as Anti-Union Organizations wage campaigns to convince Union Members to drop out, most are staying put.

And, some Unions have actually increased their numbers since the Janus verdict.

“I think the Right Wing thought this would decimate Public Sector Unions and they were clearly wrong,” says Kim Cook of the Cornell University Worker Institute, which provides research and education in support of Unions and Workers’ Rights.

According to Lee Saunders, the President of the American Federation of State, County and Municipal Employees (AFSCME): “After the Janus case, Public Service Workers are choosing to join AFSCME at a much higher rate than those who drop.”

In the meantime, State Unions are seeing similar trends to AFSCME.

In Pennsylvania, 50,072 State Executive Branch Employees were Members of Unions at the time of the Janus decision.  That number has increased to 51,127, according to the State’s Office of Administration.

In Oregon, the Local 503 chapter of the Service Employees International Union (SEIU) reported in September that new Union Members have outnumbered dropouts by 3-to-2.

In California, data from the Controller’s Office show a small increase in State Employee Union Membership, which totaled 131,410 in October - up a small fraction from 131,192 in June.

“The decision didn’t have the major impact on Membership that was anticipated,” says Science Meles, who serves as the Executive Vice President of a Chicago Chapter of SEIU, which had about 23,800 Members in August 2017 and now has about 26,000.

While the National Education Association (NEA), which represents roughly three million Employees of schools and colleges, says it immediately lost dues from 87,000 people who were Non-Members being charged, it has not seen a significant drop in membership.

According to Staci Maiers, the group’s Senior Press Officer: “Our affiliates have signed up more new Members as of (October 1st) than they have previously by this point in time.”

To Continue Reading This Labor News Report, Go To: www.governing.com/topics/workforce/gov-janus-impact-union-membership.html