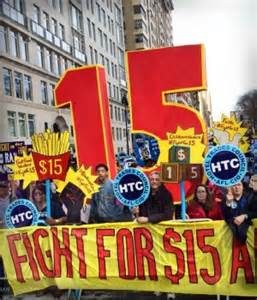 (NEW YORK CITY) – Before the ball dropped on a new year, the lowest paid Workers in New York State were looking forward to a higher Minimum Wage, with the biggest boost coming to Employees in New York City, who will make at least $15 per hour.

For Workers struggling in this expensive city, it's a cause for celebration - an extra bit of cash to help with the daily fight to make ends meet, even as rents and other costs continue to rise.

For some business owners, it's a burden as they try to figure out how to cope with higher labor costs.

In New York City, the $15 hourly rate kicked in on the last day of 2018 and will apply to Fast Food Workers and Employees of businesses with 11 or more people.  Those businesses currently must pay a Minimum Wage of $13.

That includes people like Jose Amador, 70, a full-time WORKER at a Brooklyn grocery store.  As it is now, he has to stretch hard to support his family - he has four children ages three to 15 - on the $2,500 he brings home each month.  Almost half is eaten up by rent.  The rest barely covers utilities, food and transportation.  In a city where a 30-day subway pass alone costs $121, even an additional $2 an hour "can make a difference," he said in Spanish, speaking through a translator.  "I will be able to have more breathing space," he said, and maybe even save some money for emergencies.  If his children ask him for something, maybe the reply won't have to be, "I can't afford that," he said.

The rest of the State will see the Minimum Wage go up 70 cents, to $11.10, with further increases phased in over several years.

New York State Officials estimate more than 900,000 people would be earning the $15 an hour wage when fully implemented in New York City.

To Read This Labor News Story In Its Entirety, Go To: https://abc7ny.com/4970412/?ex_cid=TA_WABC_FB&utm_campaign=trueAnthem%3A+Trending+Content&utm_content=5c23f2de1adf64000108861b&utm_medium=trueAnthem&utm_source=facebook&fbclid=IwAR20bpMsKWVPNLZaa1EE1guupKdR8tqK0KmI3goF6Hq74GADHuon7ul5ZZ4