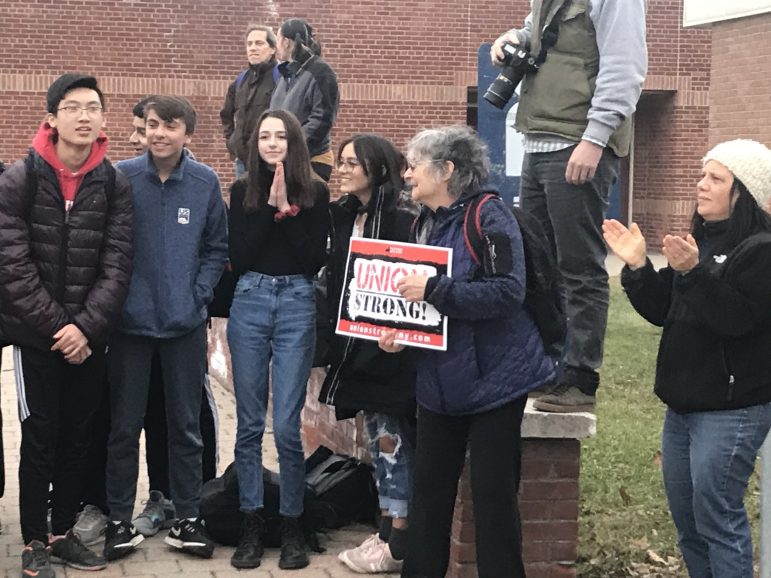 (ITHACA, NEW YORK) - As the negotiation process for a new Teachers' contract in the Ithaca City School District is set to begin, many students stood alongside teachers last week at a rally calling for higher compensation for Teachers in the district.

Students for Democratic Schooling, a student-led organization dedicated to increasing student involvement in school district issues, helped organize the rally that was held on December 20th.  About 40 students and 20 Teachers gathered outside the Ithaca City School District Board of Education office building for the demonstration.  They formed two lines extending from the back of Ithaca High School to the entrance of the Board of Education building.

David Isley, a German Teacher at DeWitt Middle School who led the rally, described the setup as “forming a tunnel of support” to wish the negotiation team for the Ithaca Teachers Association (ITA) success in negotiating higher wages and benefits in their new contract.

Some Teachers wore blue while others brought home-made signs to support the cause.

Many Teachers agreed that the district's salary schedule made it difficult to recruit Employees.

“I think the big thing is trying to make our district competitive with other districts," said William Asklar, an English Teacher at Ithaca High School. "It’s hard to hire and retain new Staff when you can make twice as much at a nearby district, or ($10,000) more, or whatever it might be, and I think it’s starting to affect the quality of the educators in this district because there are people leaving the district to seek out more lucrative options."

The financial plan for the new Teachers’ contract was discussed at the November 13th Board of Education meeting.

The Ithaca City School District ranked near the bottom 100 districts in New York in terms of median Teacher salaries, with a median Teachers’ salary of $53,319, according to SeeThroughNY, a site that acquires data from the State Comptroller’s Office and is updated at least once a year.

Lansing CSD, on the other hand, ranked higher with a median salary of $62,389.

Due to Ithaca's high cost of living, many Teachers cannot afford to live in the City of Ithaca and must make daily commutes to work, which is a leading reason why some Teachers say they want to have higher salaries in their new contract.

"Big picture for people living out of town is that they have to contend with costs associated with their lengthy daily commute (gas and routine maintenance), as well as time away from family.  I estimated that if you live in Auburn or Binghamton, which many teachers do, you will end up driving (16,000 to 18,000) miles a school year, and the cost of gas alone would probably be well over ($2,000) a year," said Armin Heurich, a Librarian at IHS.

To Read This Labor News Report In Its Entirety, Go To: https://ithacavoice.com/2018/12/students-rally-with-staff-for-higher-teacher-pay-in-ithaca-city-school-district/?fbclid=IwAR0aA_qLGP40w7B4Z3K1yoNOhMNHAj5o_xNw_5WjFJztgTANoGptGnPfz_w