Via louhud.com: Grassroots Warfare Over Union Membership Is In Full Swing - However, Janus Decision Is Providing Unions The Opportunity To Educate So Many Members About What They Provide & Its Working To Increase Membership 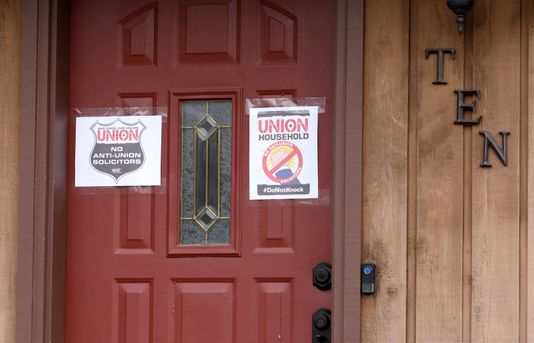 Union Members may be getting a few knocks at their door and the inquirer could be a Union friend or foe.

Door-knocking and canvassing are at the center of grassroots campaigns being waged by Pro-Union and Anti-Union Organizations looking for face-time with Public Employees who can now choose whether or not to pay fees to their Labor Group.

The change was prompted by the U.S. Supreme Court decision in June that Non-Union Members no longer have to pay dues.

Unions, as well as groups that want Union Members to reconsider paying their fees, are now employing many of the same strategies to get their message out to New York’s 1.9 million Unionized Workers, about 23% of the State’s Public Employees.

On the Union side, the pitch is that the State's Labor Organizations have long fought for Workers Rights, most recently for Paid Family Leave and an increased Minimum Wage, and provide ongoing workplace support.

Opponents, however, are letting Workers know they now have the right to choose to pay dues and will not lose contract-guaranteed benefits or access to their pension if they opt out of their Union.

The Supreme Court's decision in Janus v. AFSCME earlier this year overturned precedent from 1977 that it was constitutional to force Non-Members to pay Union Dues toward collective bargaining, known as Agency Fees, but not political activities.

New York was one of 22 states that required Non-Members to pay Union Dues.

The New York State United Teachers (NYSUT) Union has knocked on more than 100,000 doors this year.  Canvassers with New Choice NY - an affiliate of the Conservative, Anti-Union Americans for Fair Treatment group based in Oklahoma - have begun targeting Union homes in the Albany and Buffalo areas and will be expanding to different regions in the new year.

On top of that, groups have launched billboards, advertisements and FAQs on websites and sent e-mails and mailers with information about the Supreme Court decision and Workers’ Rights.

On the defensive, NYSUT has also set up hotlines so people can report opponents' activity and some Members are placing posters in their home windows to show Union allegiance in case canvassers come knocking.

But it's the more personal approach that both sides say is paying off.

"It's one thing to have the conversation in the workplace another at their front door," NYSUT President Andy Pallotta said. "I think it’s that personal connection, that sitting down and talking about the Union and the value, that has really inspired a lot of people."

To Continue Reading This Labor News Report, Go To: www.lohud.com/story/news/education/2018/12/25/grassroots-warfare-over-union-membership-full-swing/2362213002/?fbclid=IwAR3BB1XJumjKxszBfT7IIu1ALdtzMfqXJo3IH53si1mUUm_TLGs7sqgx8m4