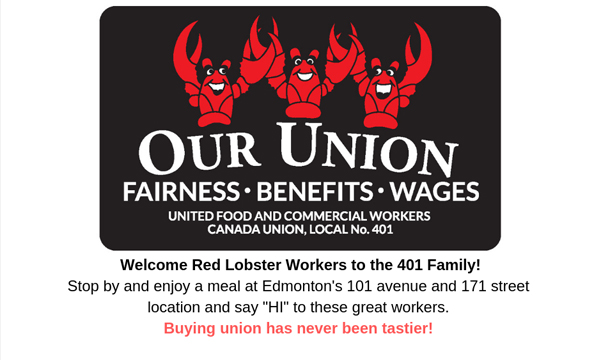 The Red Lobster Workers join the ranks of nearly 32,000 other UFCW 401 Members across the Province of Alberta.

After many objections and failed attempts by Red Lobster management to thwart the Workers’ desire to join UFCW 401, the Alberta Labour Relations Board ruled that enough Workers had signed Union Cards for the Local to be automatically certified as the official Bargaining Agent.

Workers at the Red Lobster restaurant joined the Union in order to achieve numerous improvements to their workplace, UFCW Officials said.

Soon, the Union’s Negotiating Committee, comprised of activists within the restaurant, will sit down with the employer to address Workers’ concerns and negotiate the first Union Contract for Red Lobster Workers in Alberta.

“This is indeed a ‘very exciting time’ for the new members at Red Lobster,” UFCW Canada Local 401 President Douglas O’ Halloran said. “I’d like to offer a ‘heartfelt’ congratulations to this amazing group of Workers, ‘who’ve taken the first step in bringing much-needed improvements to their workplace.”

UFCW Canada Local 401 is Alberta’s largest Private Sector Union, representing Workers across the Province in food and beverage processing, health care, education, and many other sectors of the economy.

To Directly Access This Labor News Report, Go To: www.ufcw.ca/index.php?option=com_content&view=article&id=32140:hospitality-workers-at-red-lobster-join-the-union-ufcw-401&catid=10017&Itemid=6&lang=en