Return of the Strike: A Forum On The 2018 Teacher Rebellion In The U.S. 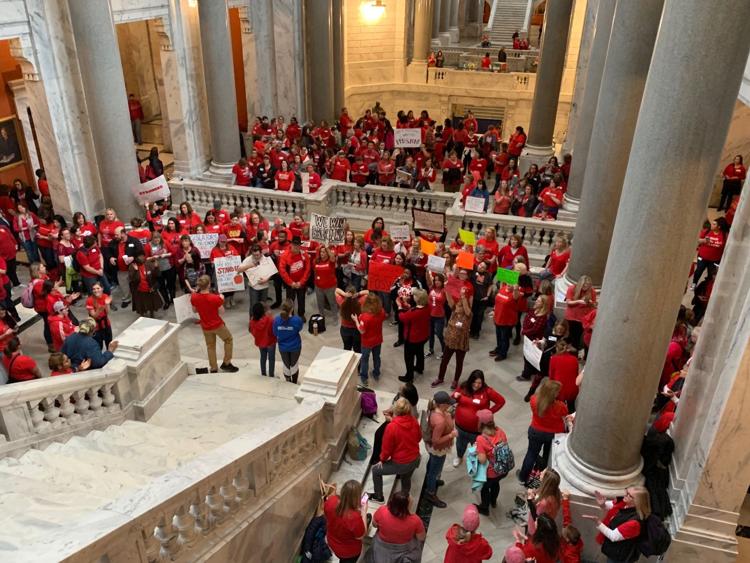 Few anticipated a Labor upsurge in the United States in early 2018 and fewer still expected a blaze to ignite among teachers in West Virginia or for it to spread to Oklahoma, Arizona, Kentucky, and Colorado.

Ellen David Friedman poses one of the questions which immediately springs to mind: “Why is this stunning revolt occurring where Unions are weak, where Labor Rights are thin and where popular politics are considered to be on the Right?”

Just last year, the United States registered the second lowest number of work stoppages involving 1,000 or more Strikers since data collection began in the Department of Labor in 1947.

On the back of three fierce decades of Neo-Liberal restructuring, the austerity measures implemented in the wake of the Great Recession eroded the world of work still further.

Teachers, especially, were in the line of fire.

For those still employed, wages and benefits have been ruthlessly scaled back, and job security has been reduced, with the lengthening of probation periods and weakening of tenure systems.

Meanwhile, austerity measures have annihilated provisions for student services and public school building infrastructure has been left to decay.

Ideologically, a bipartisan pact between Republicans and Democrats has underpinned the hysterical drumbeat that public schools are failing and must be replaced with private charters.

At a more general level, Unions have been in structural decline in the United States and where they have survived they have often been refashioned into business Unions, inclined above all to cooperation with bosses and the state.

Union Membership overall has declined 45% since the 1970s, while Strike activity has fallen an astonishing 95%.

Across the Working Class, living standards and working conditions have declined, while work has been intensified and degraded through a myriad of managerial innovations.

Hourly and weekly real wages sit below their 1972 level.

On the one hand, the Public Education Sectors endures as a stronghold of Unionization within this otherwise bleak landscape.

The National Education Association (NEA) is the largest union in the country with 3.2 million Members, while the American Federation of Teachers (AFT) has 1.7 million.

On the other hand, the bureaucratization of Teachers’ Unions has run in tandem with the turn to Business Unionism elsewhere.

“By the 1980s,’ David Friedman notes, “as the numbers of Unionized Teachers swelled and dues revenue soared, the Unions began to staff up and professionalize, precipitating a culture of negotiating instead of fighting, servicing instead of organizing, and relegating members to client status.  Leaders adopted key principles such as rule by experts, inflated executive salaries, limits on internal democracy, centralization of decision-making, and intolerance of dissent.”

For Chris Brooks, likewise, “the staff-driven, top-down structure of the state associations leaves many Teachers and school support personnel feeling only loosely connected to the Union,” which helps to explain why in West Virginia, Kentucky, Oklahoma, and Arizona, walkouts and rallies were dependent upon alternative, rank-and-file organizations to the Union, even when the Union itself was involved to varying degrees.

This forum provides both panoramic and fine-grained analyses of the Teachers’ rebellion, with the discussion spanning everything from large-scale structural conditions to local-level strategies of organization.

We examine the relations between Union bureaucracies and the rank and file, the wider political context of the United States and how it has conditioned the roll out of the struggle thus far, the geography of the Strike and the specificity of the Public Education Sector, the immediate and longer-term grievances underlying the eruption, the relationship between spontaneity and organization in the dynamic of the Strikes, the role of specific cultural contexts and Labor histories in the different states, the factors involved in strategies and tactics jumping from one state to another, the centrality of social reproduction and the politics of gender, the politics of race and racism in shaping the terrain of conflict and the potentialities and obstacles facing Teachers in the coming months and years, as well as what it all means for the Labor Movement more generally in the United States.

To Continue Reading This Labor News Report, Go To: www.historicalmaterialism.org/articles/return-strike