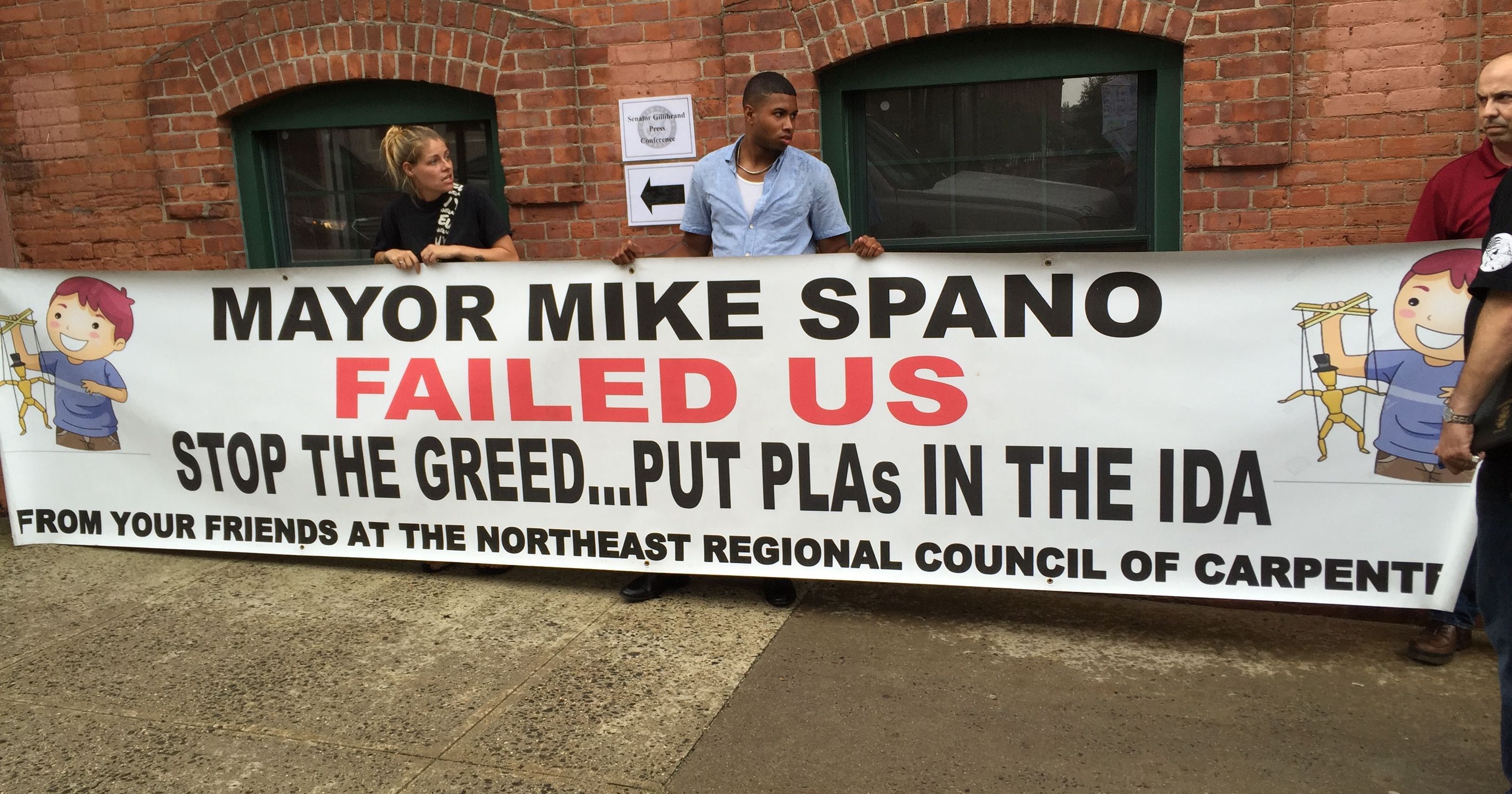 (YONKERS, NEW YORK) - With a one-year pilot program requiring publicly subsidized construction in Yonkers to use Union Labor about to expire, Westchester County Building Trades Unions are urging Mayor Mike Spano to extend it for at least five years - but the odds he will look slim.

The Yonkers Industrial Development Agency (YIDA) enacted a rule last December that required developers in all projects it aided that were worth more than $5 million to sign Project Labor Agreements (PLAs).  As a result, Construction Unions agreed to a 20% reduction in wages and benefits so developers “would hire responsibly,” Westchester Putnam Building Trades President Edward Doyle said.

Mayor Spano told The Rockland/Westchester Journal News last week that the program had been “a dismal failure,” because no development deals had been made while it was in effect.”

Speaking to News 12 Westchester early last week, after more than 100 Union Construction Workers and supporters rallied at City Hall, Spano blamed the failure on “an inability for either side to negotiate.”

But the Unions say the program didn’t last long enough to be effective.

Its one-year length, Doyle said, was “a period short enough for developers - who were never enthusiastic about paying decent wages and benefits - to wait out.  The administration even allowed one developer to evade the law by filing for tax breaks just one day before the law passed.”

According to the Unions, one developer faxed its application for a project on the city’s booming waterfront to the YIDA at 1:08 a.m. on December 18th, 2017, one day before the rule requiring PLAs went into effect.

“When the PLA Policy was passed last Winter, it was about recognizing that the wave of new development in Yonkers needs to benefit the people who live here,” Melissa Shetler, who serves as the Political Director for Metallic Lathers Local 46, said at an YIDA meeting held last week.

“The IDA required developers it gave tax breaks and other subsidies to negotiate Project Labor Agreements with the Trades and the Trades ran a Pre-Apprenticeship Program to place local residents in Union Apprenticeships, so that local people would have access to these good construction jobs.  If the IDA genuinely cares about creating a path for careers for local people, it needs to commit to this model and extend the policy for another five years at least,” Shetler said.

The Unions have not been able to get any graduates of the Yonkers Pathways to Apprenticeship Program placed in jobs in the city this year, a Laborers Union spokesperson told LaborPress.

“We are out of work right now - in the middle of a construction boom,” Nathaniel DeLeon and Ken Pablo, who became Members of Plumbers Local 21 after graduating from the program this Fall, said in a statement released by the Unions.

“The best way to put people to work is to extend the PLA language,” he said.

Developers appear to be waiting for the PLA requirement to expire before resuming plans for several projects, including converting the Kimball Theatre into 255 apartments.

Doyle told The Journal News that its developer, the Stagg Group, refused to use Union Labor unless they agreed to a 50% pay cut.

“We want to work where we live,” Laborers Local 60 Business Manager Anthony Ascencao said in a statement. “Without fair Labor standards in place, cheaper, less skilled, and unsafe Workers are brought in from out of State, and when they leave, their wages flow out of Yonkers.  A PLA insures that local Workers on a publicly supported project receive fair wages and benefits and support the economic growth of the city of Yonkers.  Developers receiving tax breaks from the IDA should support the local economy by hiring local Workers.”

To Read This Labor News Report In Its Entirety, Go To: http://laborpress.org/construction-workers-urge-yonkers-mayor-to-keep-union-labor-rule/