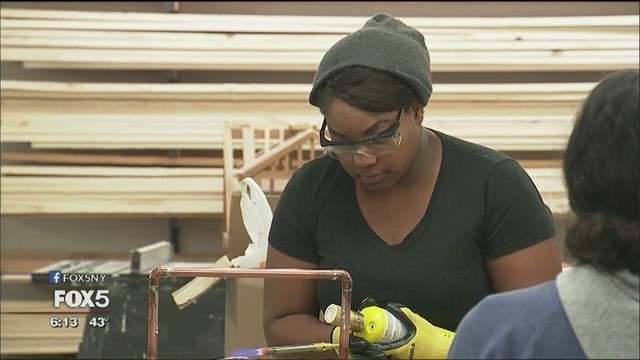 (NEW YORK CITY) - Experts say Women make up just 3% of the eight million people across the United States who are working in construction-related jobs.  But Sinade Wadsworth, a Member of Carpenters Union Local 157, says "most women believe this is a man's job, but that's not the case."

Wadsworth saw carpentry as the way to become financially independent. "This industry has changed my life.  I'm able to own my own home, bought a place for my grandmother, bought my own car and that's priceless," she said.

Wadsworth learned her skills at the New Nontraditional Employment For Women, a non-profit in Chelsea that trains women for construction-related careers.

The center trains about 400 women per year and is able to place about 300 of them in jobs.

"Literally construction is probably one of the only jobs out there that you get paid exactly the same as a man," says Maria Isabel Phillips, who graduated last year and is currently working as a Tile Setter Apprentice with Bricklayers Local 7.

"Sometimes the guys are a little apprehensive.  They look and say oh my god there's a girl, but then I'm like 'Hey, what's up, good morning' and then everyone is nice,” she said.  “There's a huge stereotype that men don't want women in construction and that's not the case.  We are very welcomed.  These men are fathers, grandfathers, uncles, brothers.  They see you.  They respect you."

The non-profit is also working on attracting even more women into the construction industry.

"We've seen the numbers increase but it's not enough," Culhane said.

To Directly Access This Labor News Report, Go To: www.fox5ny.com/news/center-trains-women-for-construction-industry?fbclid=IwAR19ueeMmpLVFyuwGTtl0gwamLxNLqz-ev046NmcNdmCRpGpAJ9e9JhojbQ