The BLS Reports Fatal Occupational Injuries Declined By 1% In 2017 - But Dont Tell That To Truckers, Construction Workers Or Workers In Alaska, The Dakotas, Wyoming, Louisiana & Mississippi - Or New York City 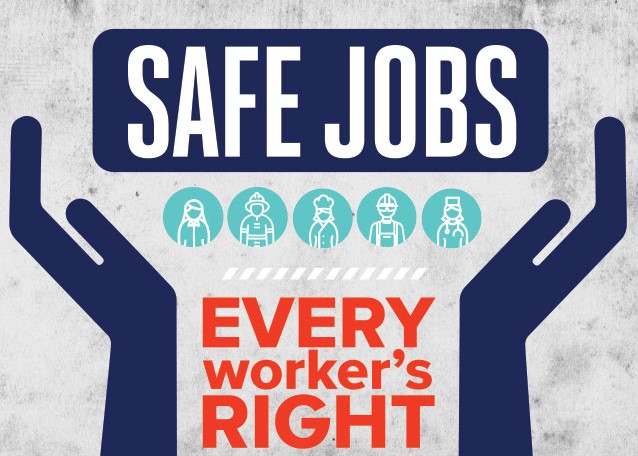 (WASHINGTON, D.C.) - The number and the rate of job injuries that killed Workers both declined by 1% in 2017, compared to the year before, the Bureau of Labor Statistics (BLS) reported.  Some 5,147 Workers died that year, a BLS survey calculated, or 3.5 deaths per 100,000 Workers, but don’t tell that to Truckers, Construction Workers or Workers in Alaska, the Dakotas, Wyoming, Louisiana and Mississippi or - at least in sheer numbers - New York City.

But don’t tell Peg Seminario, the veteran director of the National AFL-CIO’s Occupational Safety and Health Department, that the report had much good news, either.

Most of the deaths from on-the-job injuries “were preventable, caused by well-recognized hazards” which employers, with little effort, could have avoided, she said.

“There was a small decline in the number and rate of job deaths, (5,147) Workers lost their lives on the job,” she said, down from 5,190. “(But) hat is an average of fourteen Workers dying each and every day.  This does not include the deaths from occupational diseases like Black Lung and Silicosis, which are on the rise.  (This) sobering report comes at a time when the number of Occupational Safety and Health Administration inspectors is at the lowest point in decades and the Mine Safety and Health Administration inspection force has dwindled.  Instead of increasing life-saving measures aimed at protecting Working People at their workplaces, (Republican President Donald) Trump Administration is rolling back existing safety and health rules and has failed to move forward on any new safety and health protections.”

And while Seminario didn’t say so, the administration of Republican President Donald Trump Mine Safety and Health Administration (MSHA) has looked the other way so much at one malefactor coal mine that the United Mine Workers of America (UMWA) have been forced to take the owner - and MSHA - to court.

“Stopping these rollbacks, strengthening job safety protections and preventing unnecessary Worker deaths, injuries and diseases must be a top priority of the new Congress,” said Seminario, adding: “Deaths from falls reached record high levels (at 887).  Deaths from confined spaces (166) increased by (15%).  Deaths among Latino Workers (903) increased after declining in 2016.  Job deaths also increased in mining and oil and gas extraction.  And deaths among older Workers (65 and older) were at an all-time high with (775) Workers in this age group killed on the job, experiencing a job fatality rate three times the national average.”

And - the opioid epidemic hit job sites, as Seminario pointed out, which the BLS even admitted.

There were 272 deaths last year at work from unintentional overdoses of drugs or alcohol at work - up 25% from a year before.

The BLS reported that 2017 was the fifth straight year of a 25% or more hike in drug and alcohol overdose deaths.