Yellow Vests & Blue Collars  From Paris To New York City, Workers Will Only Be Pushed So Far 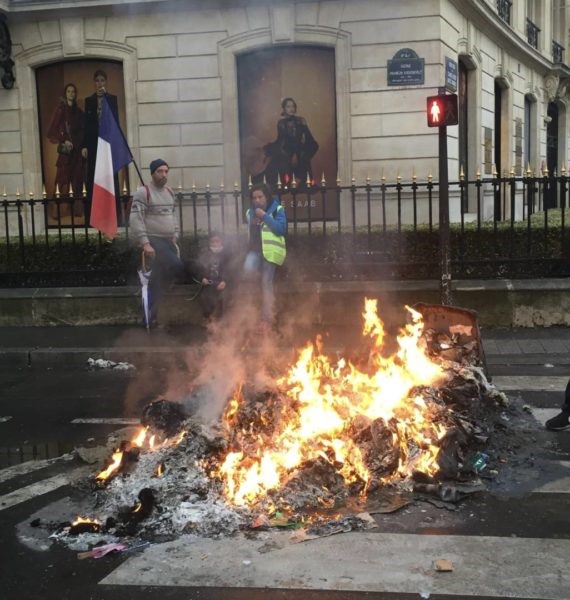 (NEW YORK CITY) - On Saturday, November 24th, I was on Franklin D. Roosevelt Avenue in Paris, France amidst burning blockades, acrid smoke and increasingly ominous explosions as the second week of that country’s “Yellow Vest” protests against rising fuel prices and other assaults on the working class gripped the Nation.

Eleven days later, I was back in New York City - penned in with Trade Unionists across the street from Charter/Spectrum’s offices on East 23rd Street, listening to an afternoon of speeches decrying the nearly two-year-old Strike that continues to hammer hundreds of International Brotherhood of Electrical Workers (IBEW) Local 3 families.

The contrast between the two Working Class uprisings couldn’t be more distinct.

In the intervening weeks, Yellow Vest protests in France have spread to cities in Poland, Spain, England, Israel, Belgium, Netherlands and Canada.  French President Emmanuel Macron’s Administration has been moved to suspend the egregious fuel tax that initially sparked nationwide demonstrations - and promise to increase wages.

Here at home, the stalemate between Charter/Spectrum and IBEW Local 3 continues unabated after more than 20-months - despite the telecom giant agreeing to cough up $174.2 million to settle a long-standing fraud lawsuit brought by the New York State Attorney General’s Office, losing the Public Service Commission’s (PSC) approval of its merger with Time-Warner Cable and having its Franchise Agreement with the City of New York audited for a second time.

But as one of the top two cable providers in the Nation, Charter Communications can afford to shell out $174.2 million to clean up its mess.  It also continues to secure one extension after another and successfully skirt the PSC’s directive to leave New York State.  And that follow-up audit of Charter’s Franchise Agreement with the City of New York?  The Department of Information Technology & Telecommunications (DoITT) said to expect it by November 1st - it has yet to see the light of day.

The frustration of Trade Unionists directly impacted by the ongoing Charter/Spectrum Strike - as well as those who view it as yet another manifestation of the kind of corporate greed bleeding Working Class Families dry across all sectors of the economy - could be heard and felt during that IBEW Local 3 rally held on East 23rd Street earlier this month.

As Union Advocates and Governor Andrew Cuomo blistered Charter/Spectrum for failing to settle the more than 20-month-old IBEW Local 3 Strike, antsy Trade Unionists shouted back: “Get carried away” and “Look at this traffic flowing by - Shut it down.”

The same sentiment is routinely reflected across the Twitter-verse where one user only recently observed: “What’s the point of the speeches at rallies if you’re just going to give Spectrum what they want anyway?  FIFTH EXTENSION?  Think the striking Families get that courtesy from bill collectors?”

From the outset, France’s Yellow Vest demonstrators have chosen to block traffic as a means of peacefully protesting corrosive government policies that kneecap Working Families - while further enriching the 1%.  However, the fiery blockades have turned violent, reportedly involving the deaths of at least six people so far.

But, over the past year, New York City Trade Unionists have also sought to block traffic as a means of peaceful protest.  It happened on April 4th, although inadvertently, when Trade Unionists supporting the Building Trades’ #CountMeIn Campaign against Related Companies and the broken shop model of development at Hudson Yards, ultimately overwhelmed police barricades and shortly took the street during a sometimes raucous rally held on 7th Avenue and 40th Street.

Some four months later - on Wednesday, August 22nd, the #CountMeIn Campaign briefly stopped traffic in both directions at Park Avenue and 51st Street with a sit-in enacted before 5 p.m.  This time, however, the action was well-coordinated and resulted in the anticipated arrest of 37 demonstrators.

On Tuesday, October 23rd, more than a thousand #CountMeIn Trade Unionists marched up Sixth Avenue to the offices of Hudson Yards Developer Stephen Ross at 10 Columbus Circle where they launched “Empire of Related” bills into the air - but all without impeding traffic.

The Building Trades’ #CountMeIn Campaign has actually been able to sustain weekly demonstrations outside Hudson Yards at 34th Street & 10th Avenue and Related’s Offices at 10 Columbus Circle, in addition to various other actions, for more than a year.

Throughout that time, the campaign has endeavored to put as many Trade Unionists in the streets as it could to challenge unchecked “corporate greed.”

Back in July, when I asked stalwart #CountMeIn supporter Mike Perez outside 10 Columbus Circle if Workers here would ever be able to match the kinds of mass demonstrations typically seen in Europe, he said: “I would sure hope so - that’s what we’re building for.”

A week later, #CountMeIn Organizer Mike Hellstrom declared: “If the masses show up, we shut down in this city.”

So far, the idea that tens of thousands of Trade Unionists hitting the streets in opposition to corporate agendas that continue to strip Workers of health care, rob them of retirement and accelerate the race to the bottom, seems remote.

If the fiery blockades on the streets of Paris prove anything - it’s that Workers will only be pushed so far.

To Directly Access This Labor Perspective, Go To: http://laborpress.org/lp-reporters-notebook-yellow-vests-and-blue-collars/