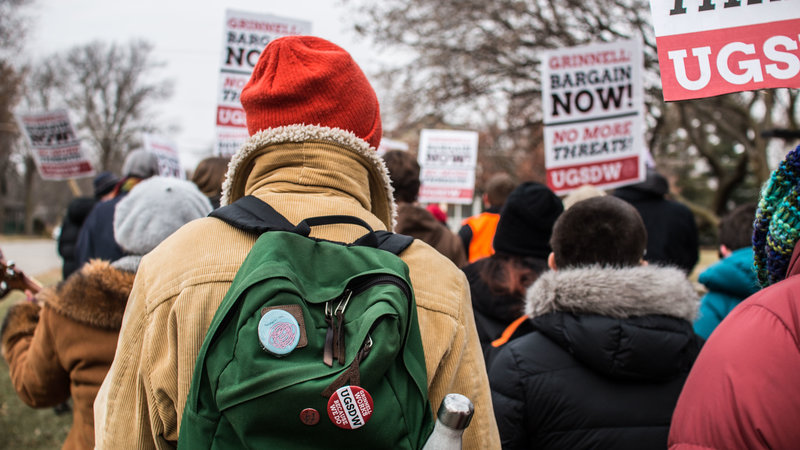 (GRINNELL, IOWA) - Students at an Iowa college want to drop their effort to expand a union representing Student Workers because they fear a Federal Board appointed by Republican President Donald Trump would reject their request, roll back Obama-era precedents and set back Unions at colleges across the country.

Grinnell College Student Cory McCartan, who helped organize the Union of Grinnell Student Dining Workers, said the group asked to withdraw its petition from the National Labor Relations Board (NLRB) in the face of opposition from college administrators.

Students at the school, which has a national reputation for its emphasis on social activism, feared NLRB Board Members would agree with administrators that an earlier decision approving the Union was incorrect.  "We didn't think we could get a fair hearing from the national board," McCartan said.

A regional official with the board will decide whether to grant the request.

Grinnell spokeswoman Debra Lukehart said in a statement that the college welcomed the Union's decision.  "The College's concern has always been about how the expansion of the Student Union could affect Grinnell's distinctive culture and diminish educational opportunities for our students," the statement said.

Students at other schools, including Boston College, Yale University and the University of Chicago, also have withdrawn petitions that were before the NLRB because of fear that an expansive ruling against a group would disrupt organizations elsewhere.

Seth Douglas, a leader of the Student Workers Coalition at Reed College in Portland, Oregon, said his group also decided in June to drop its efforts to organize Student Housing Workers, despite winning a vote only months earlier.  "We had no faith in the capacity of the Trump board to make a decision based on the merits," he said.

The dispute between students and administrators has been especially painful at Grinnell, a private liberal arts college of 1,700 undergraduates.  Grinnell sprawls over 120 acres in a small community that shares its name, about 40 miles east of Des Moines.

Although the college accepted a Union formed by Food Services Workers - a Union that should continue regardless of the expansion plans - it has fought the plans for a larger Union representing all Student Workers, prompting sometimes heated protests and threats by alumni of withholding donations.

To Read This Labor News Report In Its Entirety, Go To: www.chicagotribune.com/news/nationworld/midwest/ct-grinnell-college-union-organizing-20181215-story.html?fbclid=IwAR1GwcGpeCopcRDipmlhc52tmJKAgyOF4i4er_V3BDrQG_gCC8ieQw4MmfY