UA Plumbers & Steamfitters Local 22 Revels In Its New Suburban Buffalo Training Center, Which Is Preparing The Apprentices Of Today To Become The Most Qualified And Trained Workers of Tomorrow 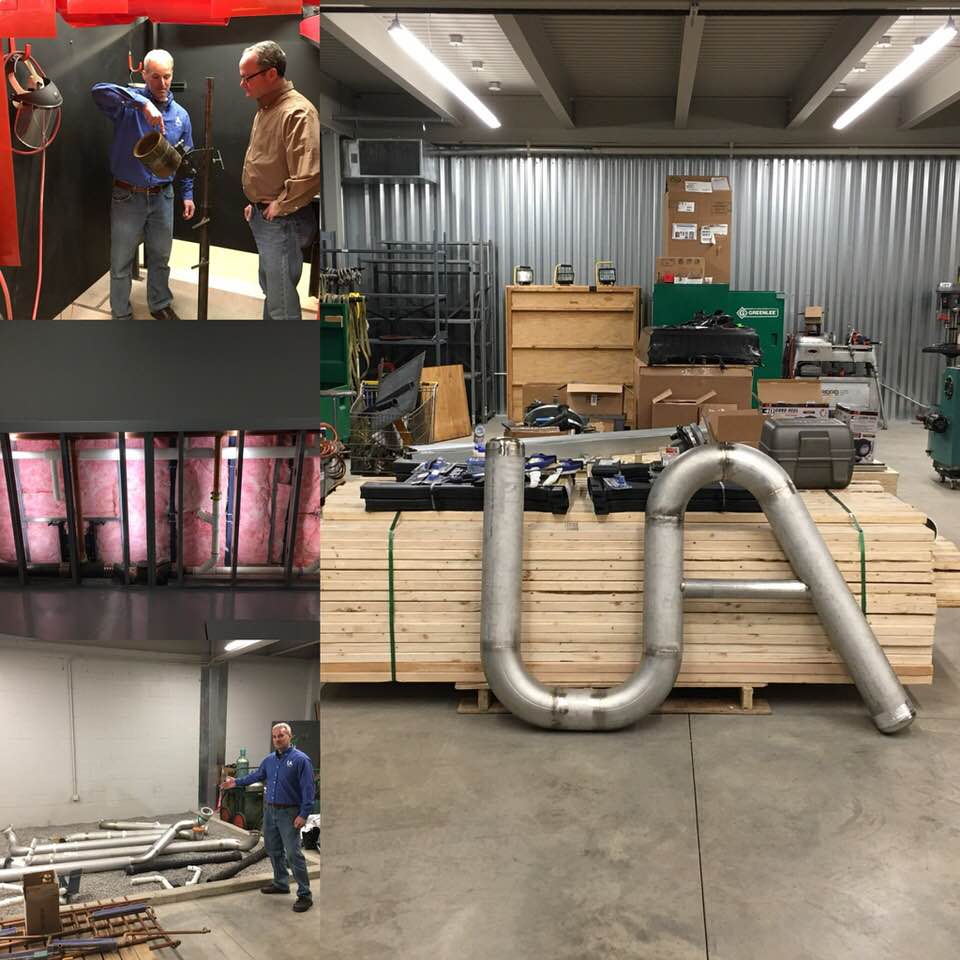 (WEST SENECA, NEW YORK) – After 19 years of being headquartered within its 16,000-square-foot Orchard Park Union Hall in the shadows of the NFL Buffalo Bills’ Stadium, United Association (UA) Plumbers & Steamfitters Local 22 has made the move to West Seneca, where it’s doubled its amount of space to accommodate an expanded Training Center that is turning the Apprentices of Today into the Journeymen of Tomorrow in order to meet the needs of an industry whose sites are set on hiring the most qualified and trained Workers of the Future. 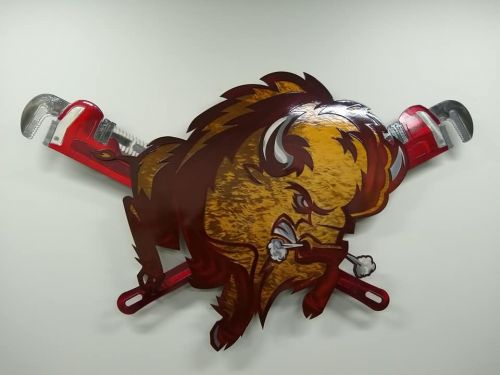 WNYLaborToday.com recently took a tour of the Buffalo Building and Construction Trades’ Member Union’s 36,000-square-foot facility on Gardenville Parkway in West Seneca, which not only houses its Administrative and Health Plan Departments, but features 44 weld booths, a computer room, 11 classrooms and a large fabrication area, to name but a few. 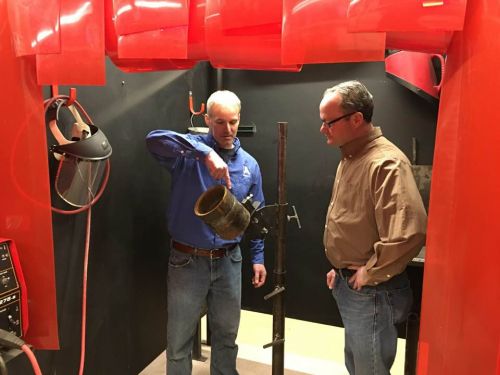 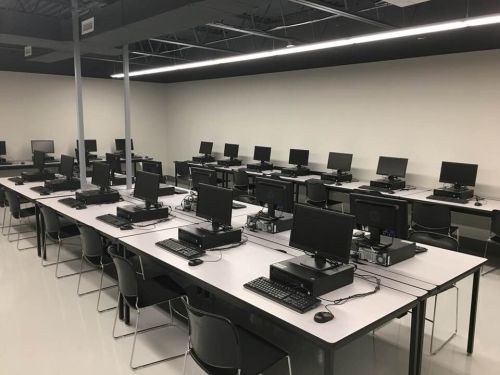 “We went from (16,000) square feet to (36,000) square feet,” said Redden, tipping his hat to now-retired Business Manager Mike McNally, who was instrumental in making the move happen.  The Union moved into its new space in an existing building that was previously occupied by a Health Care Company in December 2017, and - after making the needed renovations and moving equipment from Orchard Park, started its Training Center in September. 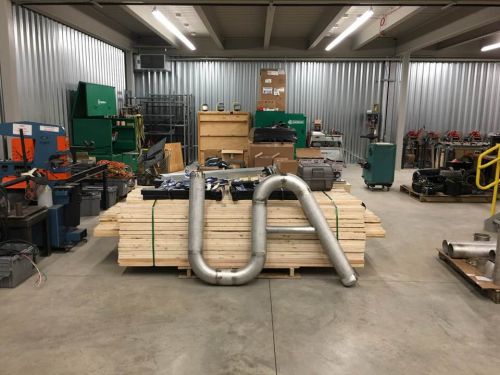 “I’m in my (37th) year.  I started as an Apprentice when I was (18),” said Redden, who served as a Business Agent for 13 years before being appointed Business Manager to succeed McNally.  Redden successfully ran for a three-year term after the appointment period ran out. “We ‘have to provide the most productive people out there’.  We ‘like to be the best.’  This is a ‘great’ facility for us ‘and the future of our Local.’  The ‘biggest eye opener’ is (that Local 22) ‘paid for this ourselves.’  ‘Our Membership paid for it – ($5 million) for the whole deal.’”

Local 22 Assistant Training Coordinator Chris Gominiak said Local 22’s Apprentices – there are nearly 150 of them, anywhere from first year to fifth year of their training, which pushes them into Journeyman Status – “are comfortable here.”  The Apprentices even have their own lockers, where they can store their gear and materials on site, instead of hauling them back and forth.

In fact, Redden adds the Union’s Journeymen “wish they had this facility to go to school in.”

But many of the Local’s Journeymen are indeed taking advantage of the new training facility, “learning new procedures and skills - including welding.”  “We’re encouraging our guys to come two days a week - at night, on Saturdays.  ‘Any’ Member can learn how to weld,” he said.

Local 22 represents 1,450 Members, including 975 who are active.  Within that active group are a number who are getting ready to retire, so the need to replenish those who are Union Plumbers, Steamfitters and those who work in HVACR (Heating, Ventilation, Air Conditioning and Refrigeration) increases on a year by year need.

And it’s not only those presently taking training offered by Local 22 in West Seneca.

Gominiak says the Union is involved in reaching out to those across the Western New York Community who might be interested in a life-changing career in plumbing, being a Steamfitter or in HVACR, through high schools, job fairs, the job corps and BOCES (Board of Cooperative Educational Services).

“Word of mouth ‘is also important, especially when our younger Members talk to people about the work they do, the money they make and the (health and pension benefits) they have,’” Redden said.

Walking through Local 22’s Training Facility, one cannot notice a gravel pit – which is affectionately known as just “the pit.”

Under the gravel lies a live sewer system for the Apprentices to practice on. 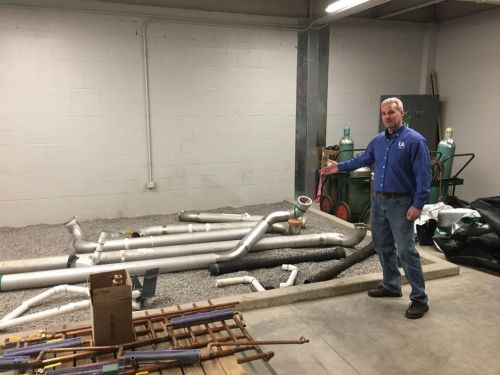 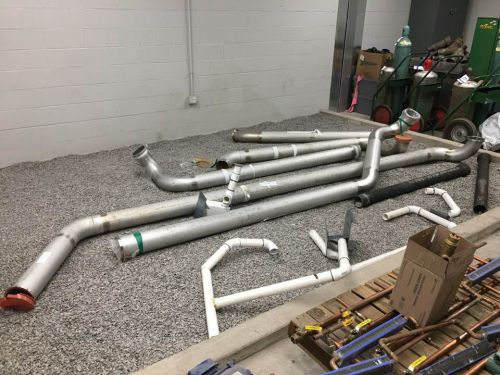 “(Apprentices) shovel through to locate (the connections) and install piping and meet the ‘necessary’ elevations.  At our California Road, the pit was located ‘outside’ the training facility,” Gominiak (pictured above) tells WNYLaborToday.com.

Just above the pit, on a second level mezzanine, is an area with Apprentices can rough out and built up to eight commercial bathrooms, complete with several fixtures - sinks, urinals and toilets - before connecting them to the sewer system below.

“Their ‘fully operational’ bathrooms.  ‘You can even flush’ the toilets” when the work is finished, he said. 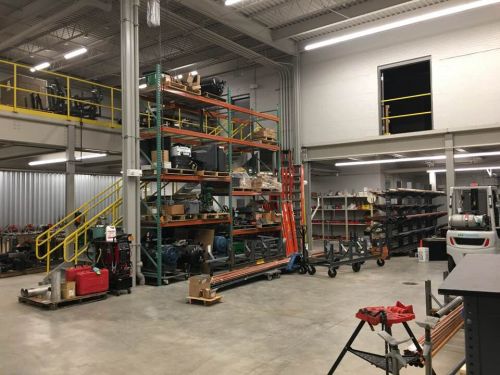 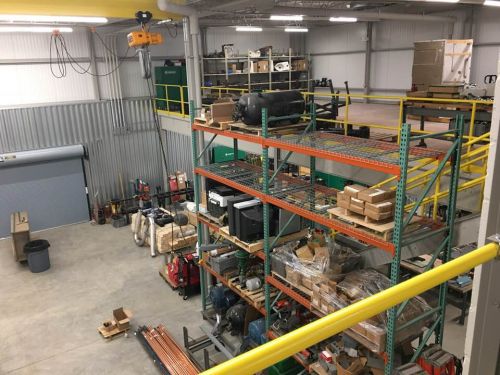 And in another area of the training center, drywall has been cut away and covered with plexi-glass to uniquely expose the inner pipe working of a bathroom, so anyone who tours the facility can see what kind of work goes into constructing such a system. 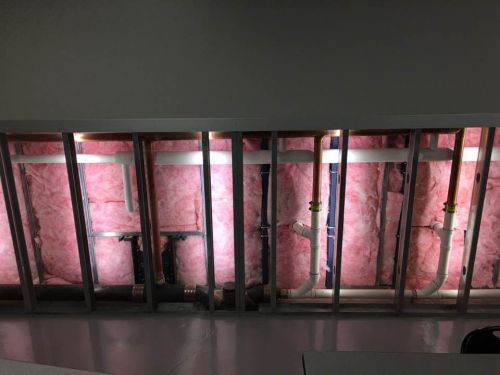 And in yet another area of the training center is an old incinerator stack that has been converted.  Now, it’s an area when manhole work is being simulated - and it’s where Apprentices “learn to work in a confined space,” Gominiak said.

The UA Plumbers & Steamfitters Local 22’s Training Facility in West Seneca is one of many new training facilities being offered by the Union and its Locals across the United States, notably those in Pittsburgh, Downtown Chicago and in Boston (with the Pipefitters Local).

And the results of Local 22’s Training Center - which is overseen by its coordinator, George Schalk (pictured below between Gominiak and Redden) - aren’t going unnoticed. 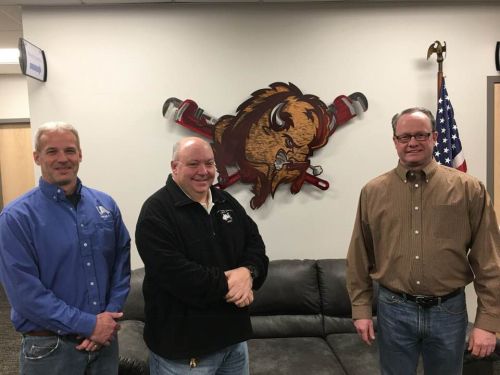 Local 22 Apprentices have performed extremely well in the International’s Apprenticeship Competition - which includes the U.S., Canada and Australia, over the years, including fifth-year Apprentice Andy Bienias, Jr., who made the finals.

“We ‘have to keep up, keep the ball rolling’ because more work is going to get going after the first of the year” Redden tells Your On-Line Labor Newspaper, referring to the Athenex Project in Dunkirk, at the Tesla Plant in South Buffalo, at Hood Dairy in Batavia, as well as more school work.  There will also be “a lot of people working” on the new Buffalo Airport Expansion.

“We have a ‘good list’ of Apprentices to fill that work ‘as needed.’  They’re studying new technology (and becoming Workers) ‘who have the capabilities needed for the future,’” Gominiak said.

Added Redden: “The materials, the technology, the time frames - ‘they’ve all changed.’”

“The average age of our Apprentices is in the mid-twenties.  ‘They know what they want to do, the career path they’ve chosen.’  ‘This is not just a job,’” Gominiak said.