What Its Like To Be A Woman Working In Construction  Solid Union Wages Are A Big Draw & A Great Equalize, But Being The Only Woman On A 500-Person Crew Comes With Its Own Set Of Challenges 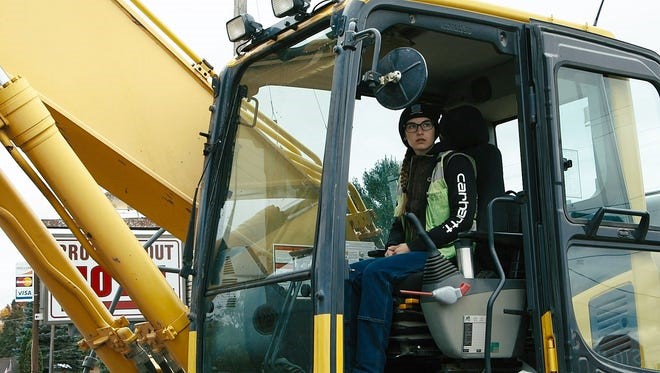 (NEW YORK CITY) - A few years ago, Jewel Tolliver was working "extremely" part-time at a restaurant when she saw an ad for a Pre-Apprenticeship Program that would teach her how to get into the construction industry.  Today, the 28-year-old is an Apprentice Laborer with the Local 79 union in New York City - earning $25 an hour, plus time and a half for overtime when there’s work.  “I am very happy. Don’t get me wrong, it’s a rough go. It’s a tough business, but I am very happy,” says Tolliver.

Women comprise just 3% of the eight million people in the United States who work in construction and extraction occupations, according to 2017 data from the U.S. Department of Labor Statistics.  The high-demand career with a median wage of $44,730 is expected to grow by 11% by 2026, one of many Trades that pay a living Wage and don’t require a college degree.

And while more Women are joining the field - when you include sales and management jobs their ranks have increased by about 16% since 2010 - there’s still a long way to go before Women will be equally represented.

Tolliver never planned to get into construction.  “I just had to take something.  It was my only option,” she says.  The two-month, Pre-Apprenticeship Program run by the New York City non-profit called Nontraditional Employment for Women taught her everything she needed to know about getting a job in construction.  “They teach you about the physicality of it, so you don’t look stupid, how to blend in a little bit,” says Tolliver, along with providing an introduction to the Building Trades, from carpentry to painting.

After years of struggling to find her calling, Tolliver says of her new career: “It’s not just a job, it’s more of a lifestyle.”  A typical work day runs from 7 a.m. to 3:30 p.m.  As a Laborer, “we actually do a little bit of everything,” whether it’s getting bricks and mortar for brick layers or demolishing the interior of the historic Liberty Theater in Times Square, Tolliver’s first job.

During her two years as a Construction Worker, she’s been able to wipe out the thousands of dollars in debt she had before she started.  When she becomes a full-fledged Journeywoman next year, she expects to earn $38 an hour.  Nationwide, the median annual pay for Construction Laborers and Helpers in 2017 was $33,450, according to the Bureau of Labor Statistics (BLS).

Construction work is physically challenging for everyone, but as a Woman of Color with few peers, it has a separate set of psychological hurdles.  “If you’re a Woman in construction you really fought to be there.  You are hungrier for it,” says Tolliver, who is Black. “You meet a lot of great guys,” she says, but with others, “a lot of times they don’t take you seriously.  A lot of times they call you ‘the girl’ like they don’t know your name.”

Black Women in the U.S. still earn just 66% of Men’s pay, according to an analysis of 2017 census data by the Economic Policy Institute (EPI).  But when you work a Union job, where pay is determined by seniority, most of that inequity is erased: Statistically, Women in construction earn 96% as much as their male counterparts.

“As a young African American Woman, I make the same amount of money as a White guy,” says Tolliver. “I definitely want to have a leadership role in my Union.  I want to be more encouraging for young Women and People of Color and see it as something for them.  I don’t want them to just think it’s a White boy’s game, because it’s not.  Everyone deserves a Living Wage.  Everyone deserves benefits.”

To Continue Reading This Labor News Story, Go To: https://free.vice.com/en_us/article/yw75mw/women-construction-workers?utm_campaign=sharebutton&fbclid=IwAR0cc59rAnEcutQ_liaGJB6b0qfhWdpytiMf3wKDHviDSjjlKYO1KRUrbTk