This Is What Going Union Can Do For You  Hoboken, New Jersey Hotel Workers Unionize, Get Pay Increases, Affordable Health Benefits & Better Protection Against Creepy Guests 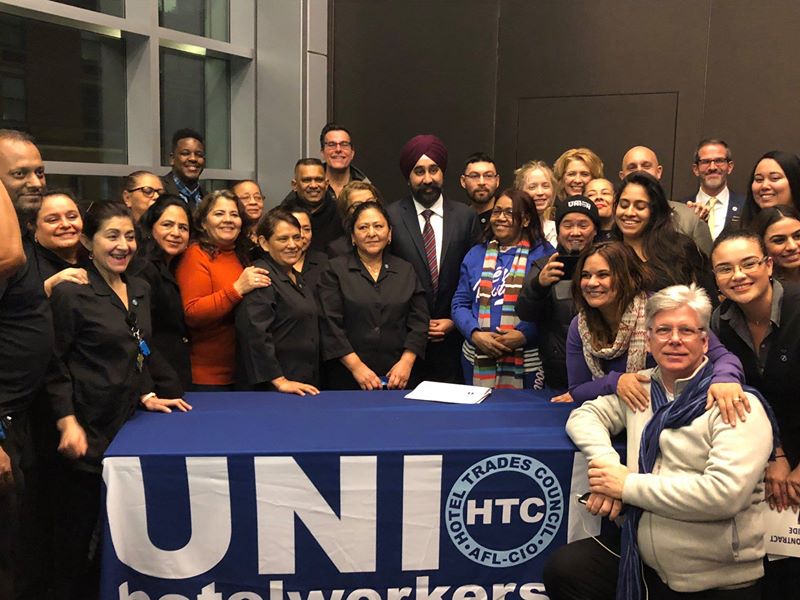 (HOBOKEN, NEW JERSEY) - Chalk up a "W" for Hotel Workers in Hoboken, New Jersey as the Employees of the city's only hotel - the W Hoboken - have approved their first Union Contract.

On Tuesday (December 11th), the Hotel Trades Council (HTC) announced 70 Employees at the Marriott International-operated hotel will receive "a number of robust benefits," including large increases in wages and benefits, paid-time-off for voting on election days, panic buttons for Housekeepers and protections for Immigrant Workers.

The HTC represents 36,000 Hotel and Casino Workers, including more than 5,000 in New Jersey.  It's more than doubled its New Jersey Membership over the past five years, Union Officials said.  The contract will cover about 70 Room Attendants, Front-Desk Agents and Banquet Workers, HTC spokespeople said.

HTC Leaders said that benefits in the new contract include: An up-front payment of almost $6,000 per worker; Additional back-pay for some workers of $5,000 or more; Average wage increases of almost $2.50 per hour immediately and almost $6.00 over the life of the contract; Affordable health benefits: $25/month for quality Family Health Benefits; A Defined Benefit Pension Plan; Voting rights: up to four hours of paid-time-off on any Election Day for Workers to go vote and the ability for them to register to vote at work; Panic buttons made available for Housekeepers to remotely summon help if they are threatened and a requirement for hotel management to take action against any guest who harasses or assaults a Worker; and "Sanctuary Workplace" protections for Immigrant Workers.

HTC Vice President Rich Maroko said that the Union was "incredibly proud" to have won such an outstanding contract: "This contract ‘will truly change what it means to be a Hotel Worker in Hoboken.  These Workers ‘will now be able to count on the Middle Class wages and benefits that they deserve, in addition to a number of new on-the-job protections.’"

The new contract at the W Hoboken was approved just weeks after the Hoboken City Council gave thumbs-up to plans for the construction of a new Hilton hotel in the city.  The developer of that hotel, KMS Development Partners, has signed a Labor Harmony Agreement with the Hotel Trades Council, which "guarantees positive Labor Relations with Hotel Workers," Union Leaders said.

All in all, it signals a bright future for Hotel Workers throughout the Mile Square City for years to come, Mayor Ravinder Bhalla said: "I want to offer my sincere congratulations to the Employees at the W Hoboken for winning a contract that offers them the wages and benefits they deserve.  As Employees of Hoboken's only hotel, they are our ambassadors, and the City of Hoboken truly appreciates the hard work they do every day."

Mayor Bhalla said it was "gratifying" to see the city's Hotel Workers set this standard, especially at a time of heightened interest from developers in building new hotels in Hoboken: "We want not only ‘new’ hotels, ‘but also quality jobs’ for Hoboken's workforce.  I ‘want to thank the Hotel Trades Council for their hard work and success in advocating for Hoboken's Hospitality Workers.’"

To Directly Access This Labor News Report, Go To: https://patch.com/new-jersey/hoboken/hoboken-hotel-workers-unionize-win-better-wages-benefits?fbclid=IwAR08vCGRPHT5MRTcre6BujT1jFuCcmApefeGewESa1YQCL5YpKAv4FBdZdU