Making The Switch From Non-Union To Union Construction Worker For New York City Women Is Lovely - Pay Increase Allows Working Moms To Not Only Pay The Rent, But, But Proclaim That The Union Is The Best Thing For Anybody 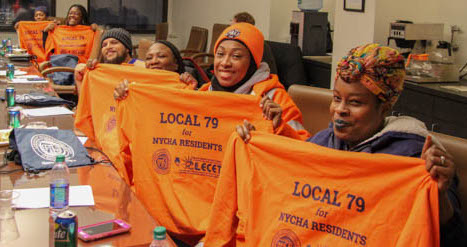 She provides “everything Bricklayers need” - bricks, cleanup, cement, she says.

And she finds being a Union Member “lovely.”

Sano Henry, who lives in the Grant Houses on Harlem’s western edge, was able to join Local 79 through its program of recruiting public housing residents.

City regulations called Section 3 require 15% of Workers on New York City Housing Authority construction jobs to be NYCHA residents - so Local 79 has used that to bring more than 300 people into the Union over the past 15 years.

“What ‘makes it unique’ is that we’re ‘not only recruiting’ NYCHA residents,’ but we’re bringing them straight in as journey people,’” says Lavon Chambers, the Assistant Director of the Laborers-Employers Cooperation and Education Trust (LECET), the Laborers International Union’s alliance with contractors to promote and train Union Labor in the construction industry.

The Union finds prospective members through about 30 or so community organizations it works with, he says.  They include the Staten Island NAACP, the St. Nick’s Alliance in Williamsburg-Greenpoint, Good Old Lower East Side, and the Ocean Bay Resident Council in Rockaway.

Contractors on NYCHA jobs ask Local 79 to send them Workers and the Union then asks the community groups to send them possible recruits, says Local 79 Organizer Justice Favor.

Applicants must be listed on a NYCHA apartment lease, pass a drug test and have their 10-hour Occupational Safety and Health Administration (OSHA) Safety Training Certificate.

Contractors can also sponsor Workers directly, as long as they promise they will hire them.

Experience is a plus, says Favor, but not necessary.

“I look for someone who ‘understands what this job entails,’” he says. “It’s a ‘hard’ job and ‘you’re going to have to get up early and work in all kinds of weather.’”

To Continue Reading This Labor News Report, Go To: http://laborpress.org/brickwork-on-their-own-block-local-79-recruits-nycha-residents/