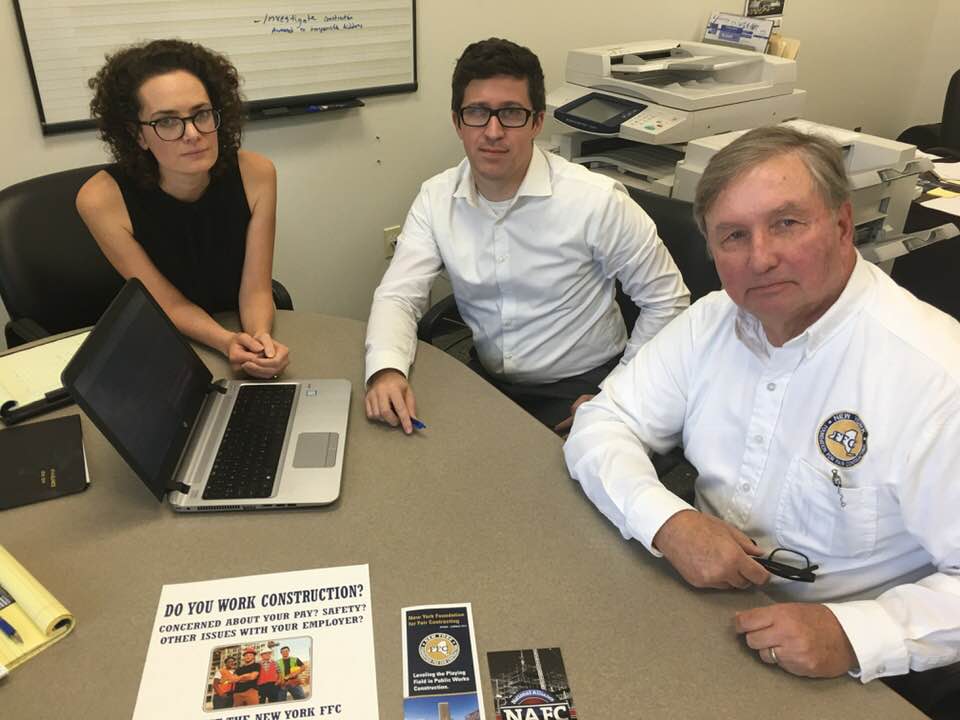 WNYLaborToday.com Editor’s Note: The non-profit New York Foundation For Fair Contracting (NYFFC) is working to level the playing field for Workers, public bodies, business owners and taxpayers to ensure all benefit when it comes to awarding and working on publicly-funded projects.  Pictured above, from left to right: Candace Morrison, an Attorney who serves as Counsel to the NYFFC; NYFFC Researcher Matt Kent; and NYFFC Compliance Specialist Joe Suszczynski.  (WNYLaborToday.com Photo)

(HAMBURG, NEW YORK) – Fear - in a word, according to representatives of the non-profit New York Foundation For Fair Contracting, is holding back many Non-Union Construction Workers from reporting wage theft or unsafe working conditions.

That’s because they don’t know where to go for help when it comes to being cheated out of their wages and their fringe benefits.

And just how would they ever make the right authorities aware of what’s happened to them without facing repercussions from their employer or being fired from their jobs?

And it’s not just Construction Workers.

Its contractors looking for a fair shot at obtaining public construction work, while at the same time battling unscrupulous contractors that receive low responsible bidder status on a project.

And its public bodies that want to award contracts to responsible contractors who qualify as the low bidder.

After all, in the end, it’s the taxpayer who foots the bill when it’s found a debarred contractor that’s been restricted from bidding for public works jobs does indeed get the job.

Under the State Freedom of Information Law and the Federal Freedom of Information Act (FOIA), the NYFFC - which is not a private investigative service - reviews bid documents, contracts and certified payroll records to ensure contracting companies are following the laws and regulations that govern the industry.

The NYFFC’s compliance and monitoring work is done for the benefit of public bodies, as well as the taxpaying public.  And its investigations serve to curb the corrupt act of underbidding and disenfranchising, not only for the individual Workers on a project, but also for taxpayers who expect a timely, safe and high quality end result.

By monitoring the bid process and submitting bid protests when necessary, the NYFFC acts as a pro-active watchdog.  The NYFFC will then alert a public body that an apparent low bidder is currently on the New York State “debarred” list – which means when a contractor is on that list and is restricted from bidding for public works jobs.

With that said, the NYFFC also helps Workers prepare complaints to notify a regulatory agency where their complaint or complaints can be fully investigated.

“When (contractors) ‘aren’t playing by the rules - there is no level playing field,’” Candace Morrison, an Attorney who serves as Counsel to the NYFFC, told WNYLaborToday.com during a recent interview held at the organization’s offices in Hamburg, just south of Buffalo.

“We handle about two dozen complaints a year,” Morrison continued, adding the NYFFC looks at cases across New York after having morphed into a Statewide Organization in 2014.  Before then, its mission was being a Western New York entity only.  “Unfortunately, (unscrupulous) contractors ‘don’t just operate here in Western New York,’” she said.

In terms of Construction Workers caught in a desperate situation when it comes to wage theft and unsafe working conditions, Morrison said: “There is ‘fear.’  They’re ‘afraid’ (to take any action against their employer).  Instead, (the NYFFC) is the ‘intermediary, without having to publicly identify’ (the Worker or Workers).  The Employee ‘is not exposed’.  We are their ‘lawyer.’”

And it would appear the NYFFC is already having an impact. 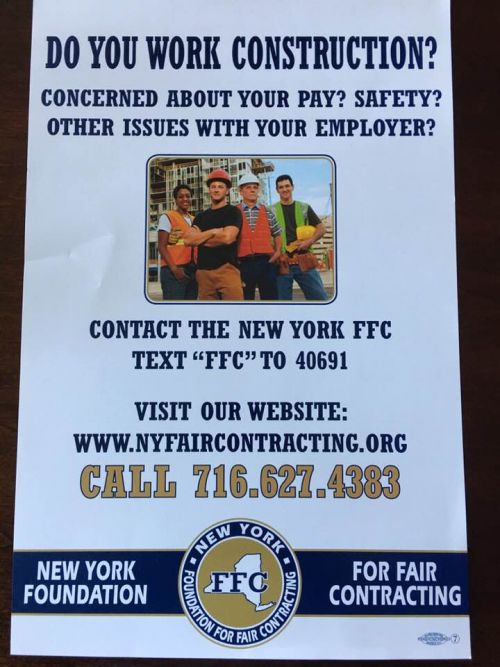 Case in point - in October, and as a result of a NYFFC investigation and a subsequent lawsuit, two Buffalo-area contractors and two owners were ordered to pay more than $3 million to settle false claims act allegations (See the U.S. Department of Justice press release at www.justice.gov/opa/pr/western-new-york-contractors-and-two-owners-pay-more-3-million-settle-false-claims-act).

“Contracts are set aside for Service-Disabled Veteran-Owned Small Businesses so to afford Veterans with service-connected disabilities the opportunity to participate in Federal contracting and gain valuable experience to help them compete for future economic opportunities,” Acting Assistant Attorney General Chad Readler of the Justice Department’s Civil Division said in a press release.  “Every time an ineligible contractor knowingly pursues and obtains such set-aside contracts, they are cheating American taxpayers at the expense of service-disabled Veterans.”

“We take a look at a situation and examine what the allegations ‘are based on,’” NYFFC Compliance Specialist Joe Suszczynski told WNYLaborToday.com.  “If, for example, it is a ‘low bid’ - a ‘really low’ bid, ‘there can be wage checks’ through FOIA requests.  We get certified payrolls ‘and match them up to determine any misclassifications’ (of job titles, which allows for wage theft).  ‘If it raises enough questions,’ we contact the New York State Bureau of Public Works, which will ‘investigate and determine if there is the need to collect back pay.’  And, if a contractor ‘is found in violation, they can be debarred from bidding on public work for a period of five years’ – if it is found to be a ‘willful’ violation.”

Suszczynski knows his job well, having joined the NYFFC in 2011 after retiring from a 36-year career as an Investigator with the U.S. Department of Labor, Wage & Hour Division.  He has extensive experience enforcing Federal Labor Laws, including the Davis-Bacon Act (the Federal Prevailing Wage Law).

Suszczynski has conducted investigations across 20 New York State Counties that are covered by the Buffalo Wage & Hour Office - and in the process, recovered thousands of dollars in back pay for hundreds of Workers who’ve been underpaid by their employers.

“You have to ‘believe in what you are doing,” Suszczynski told Your On-Line Labor Newspaper.  “We have no ‘legal’ authority and we ‘can’t go on a work site,’ but ‘we can look into (the allegations and physically observe the worksite), conduct an investigation and pass the information on to authorities.’”

Also playing a key role at the NYFFC is Researcher Matt Kent, who continually monitors the bidding process of public works projects and helps advance the NYFFC’s pro-active advocacy agenda.  Kent returned to his Western New York roots after spending 14 years in Washington, D.C., serving as a Federal Lobbying for the American Postal Workers Union (APWU), where he built and mobilized bipartisan Congressional coalitions in support of robust public services.

“It’s ‘gratifying,’” Kent told WNYLaborToday.com of the work that he does for the NYFFC.  “And the NYFFC ‘is also engaged in providing preventative’ information, including our participation in a (recently-held) Local Government Conference.  Even though it was the ‘last class of the day, there was very good attendance’ with about forty (participants).  (Local Officials) ‘don’t realize how much power they hold on a project that impacts their’ community, their taxpayers and citizens.’  They’re ‘just looking at (securing) the lowest responsible’ bidder.  They ‘usually don’t go further than that’ (in terms of looking a bit deeper into the history and track record of that chosen lowest responsible bidder).”

“(Public entities) ‘have an obligation.’  They ‘just can’t assume everything is being done right.’  ‘They have the right to ask for proof’ of (wages and benefits) payments.  We ‘make them aware that they can do that.’  ‘They can ask for’ documentation,” Suszczynski added.

The NYFFC offers these complimentary services to contractors: Accurate and up-to-date wage rates and Worker Classification information and explanations of contractor rights and responsibilities - under the law.  And, all services are confidential.

When it comes to Construction Workers, the NYFFC says Employees should be paid a pre-determined “prevailing wage” for all hours worked on a public work job.  The wage rate is dependent on Worker Classification – such as a Carpenter, Laborer, Operator - and the New York State County where they are working.

Under New York State General Municipal Law, a State body has the right to award a contract to the lowest responsible bidder.  Municipalities across New York have enacted responsible bidder laws that reinforce the legal obligation to award a contract to the company with both a low bid and a responsible compliance history.  As such, the NYFFC provides support and guidance to municipalities wishing to enact a Responsible Bidder Ordinance, which it did with City Officials in Dunkirk, located in Chautauqua County – just south of Buffalo.

“The law doesn’t define ‘responsible’ bidder,” Morrison said.  “We help them do the ‘preventative’ work.”

In regards to an unsafe workplace, it’s the U.S. Occupational Safety & Health Administration (OSHA) - the Federal Agency that’s responsible for setting, maintaining and enforcing workplace safety standards for all work places across the U.S.  If a Worker believes there’s an OSHA violation at his or her workplace, Employees are asked to contact OSHA directly here in New York State, at 716-551-3053 in Buffalo, at 315-451-0808 in Syracuse and at 518-464-4338 in Albany.  The NYFFC also provides assistance for those wanting to file an OSHA complaint.

Currently, the NYFCC gets its word out by publicizing its services through its web site (http://nyfaircontracting.org/) and on its Social Media Facebook Page (www.facebook.com/TheNewYorkFoundationForFairContracting/). 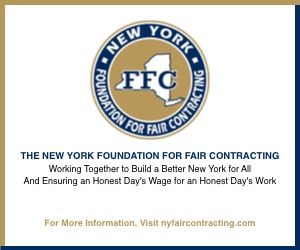 It also provides pamphlets, signage and other materials for interested public bodies and contractors to post, part of which reads:

We can only level the playing field by working together.

If you are a contractor, public body or Worker and want to learn more about fair contracting, contact us at 716-627-4383.

If you believe a construction contractor is not paying the correct wages or overtime, has an unsafe work site or is not performing a job right, contact us.