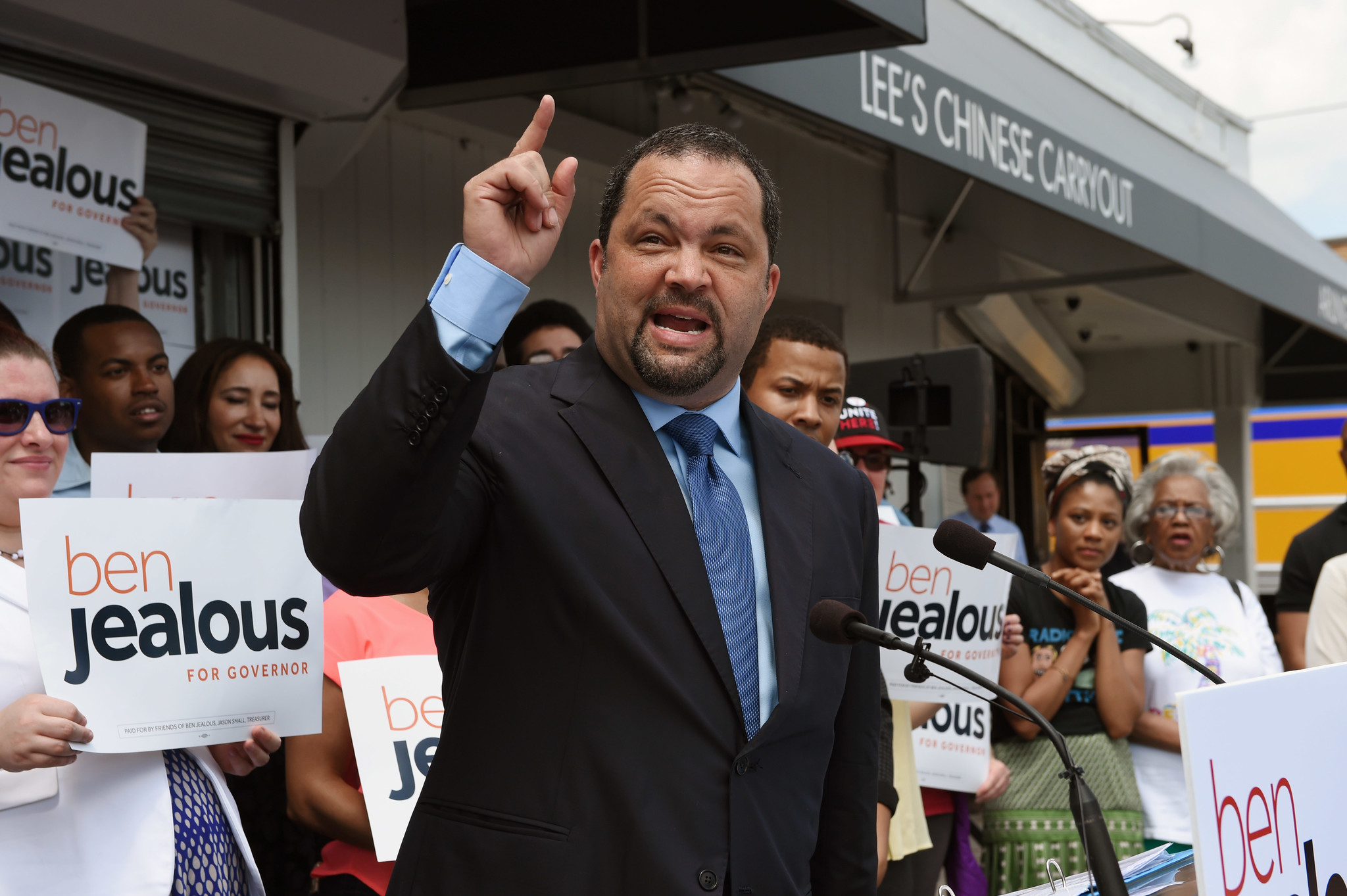 (WASHINGTON, D.C.) - Without Unions, Ben Jealous says, he wouldn’t have escaped poverty in West Baltimore, but his mother had a union behind her at her job.  She made enough money to let him get out of the projects, go to college, become a Rhodes Scholar - and run for governor of Maryland.  Jealous, the former head of the NAACP, brought that story and his Pro-Union stand to the Congressional Black Caucus Legislative-Political Conference in D.C. in early September.

Jealous won with only one notable Union, National Nurses United (NNU), behind him, thanks to his stand for Medicare for All and other progressive positions.  The Maryland State AFL-CIO, which stayed neutral in the party primary, endorsed Jealous on September 3rd, but the Laborers and the Fire Fighters back Hogan.  The Communications Workers of America (CWA) and the Maryland Education Association (MEA) support Jealous.

“I’m ‘proud’ to be endorsed by the AFL-CIO and most of the Unions across this state and what they know is I’m a former Member from a Union Family ‘and I know strong Unions make strong families,’” Jealous said after the State Fed’s decision. “So we’re going to go out there, we’re going to turn out the voters.”

The split doesn’t discourage Jealous, who shared a panel with the Nation’s two other Labor-backed African-African Democratic Gubernatorial Nominees, Stacy Abrams of Georgia and Andrew Gillum of Florida.  Both are in toss-up races.

“When you’re from West Baltimore, ‘you never forget where you come from,’” Jealous told the enthusiastic crowd. “You ‘can’t get from growing up in a housing project to being a Rhodes Scholar without the help of Unions’” that his mother belonged to.  “You’re ‘not supposed to mention Unions south of the Mason-Dixon line,’” Jealous added, but he does.  Maryland is 10.8% Unionized, ahead of Florida (at 5.6%) and Georgia (at 4%).

The big theme from Jealous, Gillum and Abrams was authenticity triumphs at the polls.

Gillum, the Mayor of Tallahassee, also upset the establishment favorite, white former U.S. Representative Gwen Graham. Abrams, the Georgia House Minority Leader, showed such strength that she united the establishment and the progressive wings of the party in her primary triumph.  All three are more progressive than their foes.

The three also declared their authenticity shows in their progressive positions, on health care for all and against the Right Wing’s “Stand Your Ground” Law (in Florida), Pro-Gun Control - in Georgia, of all places - and for more education spending (in Maryland), among other issues.

“If I was (to be) known ‘for one thing, it’s to massively increase money for our schools,’” Jealous said. “I’m going to finish the fight (for quality and equal education that) my mom started.  ‘I didn’t have to change my hair, my skin color or my ginger to become governor of Georgia.’”  So when she talked sensible gun control in the supposedly gun-happy state, voters thanked her, even in rural towns “that are hardly bastions of liberalism,” he added.

“The ‘only thing I haven’t been is rich,’” added Gillum, the only non-millionaire in the primary. “I was the ‘broke’ one,” spending $6 million in the nation’s third-most-populous State and its expensive media markets.  Gillum’s foes spent a combined $90 million - and lost. “Voters saw I ‘didn’t have to compromise.’  ‘That liberated me and I could be myself,” he said.

Jealous ran on values his parents inspired.  His mother was not only a Union Member, but integrated her high school in the western section of Baltimore, after her family and Civil Rights Groups sued to let her in.

“The (Democratic) establishment ‘first tried to disown me from my own State,’” he said, referring to commuting between his White father’s out-of-state home and his mother’s place in Baltimore.  They had to live apart “because my parents’ marriage was illegal” when they wed, he said.

Whether authenticity will win in November is another matter.

Abrams is tied with Trumpite Secretary of State Brian Kemp in Red-turning-Purple Georgia.

Maryland’s establishment politicians are sitting on their hands or giving Jealous tepid support.

Much of the result will depend on turnout, the three said.

In a swipe at the consultant class, Jealous said re-packaged candidates don’t give voters a reason to come out. Instead, they see no difference and stay home. Candidates who move to the middle “are playing with the marbles on the table. We’re trying to bring more marbles into the game,” he added.

But all three also face an onslaught of “dark money” funded ads from shady GOP groups, many of them including dog whistles designed to divide and scare White voters.

And Gillum has already been a tweet target of Republican President Donald Trump.

“Their ‘goal is to make us go low,’” Jealous commented. “They ‘use race to divide us.’”

Their response: Don’t go in the gutter with their foes unless they cross undefined nasty lines. Then respond with scorn and cite those insults to get their own backers to the polls.

Jealous took an extra shot at politicians who, listening to pollsters and consultants, drift to the center.  Those pols “are operating from the ‘old’ playbook,” he said.

That playbook, he added, warns candidates not to discuss issues such as poverty, criminal justice reform or paying Teachers enough to live on, Jealous said.

The others agreed avoiding such issues is wrong.

“I ‘broke all the rules’ about talking about gun safety,” Abrams said. “And that’s ‘even though I know how to shoot,’ having learned from my grandmother.”

That’s when she told the story of a mother in the rural town, whose depressed college-age daughter used Georgia’s lax gun laws to buy a gun and kill herself.

“Please God, she (the mother) told me, ‘be a governor who will save someone else’s child,’” Jealous said. “You ‘have to give voters a reason to vote for something, not just against someone.’”