Published Tuesday, May 22, 2018
by Eileen Buckley/News.WBFO.org 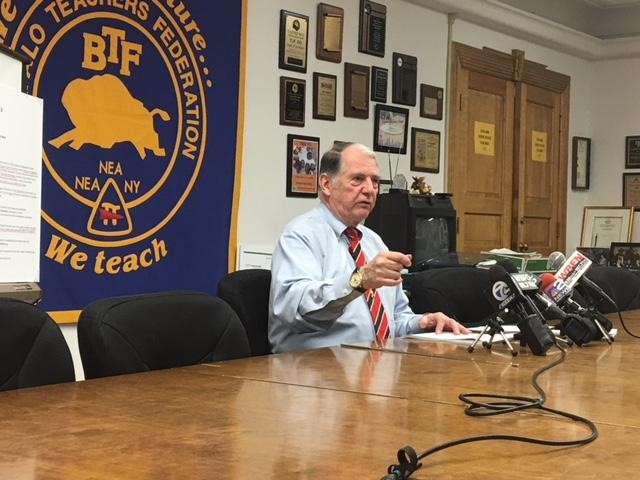 (BUFFALO, NEW YORK) - Buffalo Teachers Federation (BTF) President Phil Rumore is calling the City School District’s Teacher Transfer Process an "utter disaster,” something Rumore has been calling on the District to fix the process since a year ago last June.

“Utter 'disaster from day one,'” Rumore said during a news conference held at BTF Headquarters earlier this week.

Doling out some harsh remarks, Rumore said the Teacher Transfer Process demonstrates “incompetence” and “falsehoods,” while violating the Union's agreements with the District.

The BTF Labor Leader specifically points out an on-line portal used for Teachers in the process violates their contract because it needs to be in writing.

“We told them ‘you can’t do that because it’s supposed to be in writing’ and if a Teacher applies by the portal and ‘doesn’t do it in writing, another Teacher can grieve it and they’ll have to re-do it, so we said ‘look it - what we’ll do is back up here, you made a mistake, we’ll work with you to correct it,’ give us a list of the names of the Teachers that applied only on-line and ‘we will write up something so let them reapply and everything will be fine’ – ‘they still haven’t done that,’” Rumore said.

Jamie Warren, the District’s Human Resources Associate Superintendent, told reporters it's an innovative system that now places Teachers in classrooms before the school year, which benefits the children - adding the District will not “go backwards.”

The BTF’s Rumore, meanwhile, noted hundreds of Teachers have applied for transfers.

Rumore said he's been calling on the District repeatedly since last June (2017) to fix issues.

“If ‘they don’t correct these things - what will happen is they’re going to have to redo all of these transfers at all of the schools and the ripple effect on this is going to be staggering,’” he said.

To Read This Labor News Story In Its Entirety & To Listen To Buckley’s Audio News Report, Go To: http://news.wbfo.org/post/btf-calls-teacher-transfer-process-disaster?utm_medium=RSS&utm_campaign=wbfofm887storiesfromfocusoneducationeducationandwbfoeducationdesk