13-Year Relationship With 1199 SEIU-Represented Kaleida School Nurses Is Over, Which Now Begs The Question: Did Buffaloâs Public Schools President Just âBustâ The Union?

While The Decision May Now Prompt Kaleida To Go To Court, 1199 SEIU Says The 76 School Nurses Will All Be Absorbed Into The Kaleida System - â(Kaleida) Guaranteed It - Weâve Had A Very Good Labor-Management Relationship With Kaleidaâ 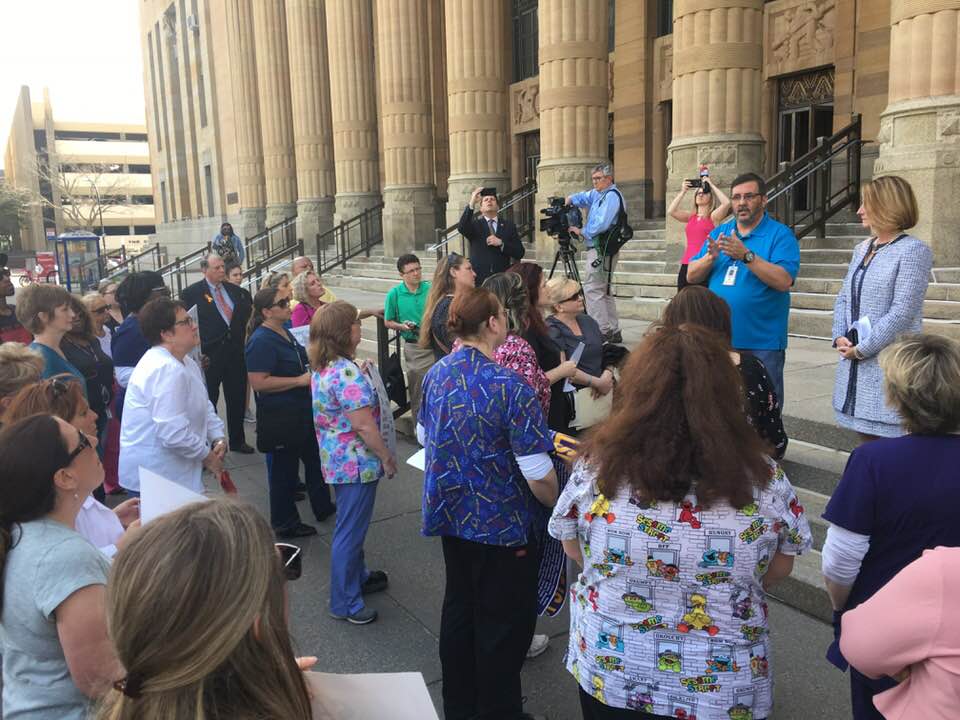 (BUFFALO, NEW YORK) – It was just 16 minutes, a relatively small amount of time, after a deadline slipped by - but in the end that was the reason why the submission of a bid to renew a 13-year relationship involving 1199 Service Employee International Union (SEIU) Healthcare Workers East-represented Kaleida Health School Nurses was eventually discounted and officially brought to an end their duties taking care of students who attend City of Buffalo Public Schools.

When the dust cleared - after a back-and-forth involving the City’s Board of Education explanation of accepting the late bid and then deciding to clock it in anyway - even after the deadline had expired some 16 minutes earlier, and dozens of passionate pleas made by the Union Nurses who spoke publicly late last week at a School Board hearing in City Hall - Schools Superintendent Kriner Cash officially announced that Supplemental Health Care Buffalo Nursing and Sunbelt Staffing LLC of Oldsmar, Florida would replace the Kaleida Nurses and receive a new three-year contract, which carries a cost of $6 million in just its first year.

The new contract takes effect on July 1st, but the 76 Union-represented Nurses will not find themselves unemployed.  1199 SEIU Vice President and Area Director Jim Scordato says Kaleida – whom the Union has a “very good” Labor-Management relationship with – has agreed to absorb the Nurses into its Health Care System.

“Everybody is going back into the (Kaleida) system,” Scordato told WNYLaborToday.com.

But, the question remains: Why would the Buffalo School Board choose to end a 13-year-long relationship with 1199 SEIU/Kaleida Nurses over a 16-minute late filing gap, even though it received Kaleida’s proposal via e-mail in the allotted time and even agreed to clock-in the hard proposal some 16 minutes after the advertised deadline?

And, why wouldn’t the Board of Education make Kaleida immediately aware its bid would not be accepted - instead of waiting a period of four months to tell Kaleida so?

When asked by WNYLaborToday.com if Cash had ultimately set his sights on busting the Union Nurses, 1199 SEIU’s Scordato answered: “Not so much that he ‘busted us’ - he ‘wanted’ the Union group ‘out.’  Cash ‘has worked with’ Sunbelt Staffing ‘in the past and he apparently wanted them (back in the picture).’  While they ‘might solicit’ our Nurses (for positions under the new operators), the salaries and benefits ‘they offer will be nowhere near what they get now.’  ‘And while we didn’t get the bid, it was about ($100,000) more over three years (as compared to the selected bid).’  ‘I would think that Kaleida would probably appeal (the decision) and sue.’”

Kriner may also have tipped his hand as Nurse after Nurse was allowed to address the School Board shortly after the Nurses and their supporters rallied outside City Hall to make their predicament public and state their case to be selected as the favored bidder.

Scordato told Your On-Line Labor Newspaper that Cash individually “lambasted” the Nurses who spoke and made it a point to criticize them for allegedly using their children to make their case and further their cause.

"What you saw tonight was an outpouring of passion and support for the Nurses," said Michael Hughes, Kaleida's Chief of Staff, told The Buffalo News. "Obviously, the board took the vote they thought was in the best interest of the kids, but clearly is designed as a cost-cutting move.  In the end, the kids and the Nurses are the ones who lose here."

Kaleida was embarrassed by the bid filing error and took full responsibility for it, pointing out that an electronic copy of its proposal was e-mailed to the district before the deadline, The News also reported.

Board of Education Member Catherine Flanagan-Priore recused herself from the bid vote, because she is employed by Kaleida Health and represented by 1199 SEIU.  She later resigned from the Board, voicing her displeasure to the local media with how the situation was handled as the reason she decided she could no longer serve in that public capacity.

Prior to the Board vote, dozens of School Nurses rallied on the steps of City Hall, joined by Kaleida and 1199 SEIU Representatives and Buffalo Teachers Federation (BTF) President Phil Rumore, whose Union had thrown its support behind the School Nurses.

“Nobody can do the job you do,” Rumore (Pictured below on the left in a suit, next to 1199 SEIU's Scordato/WNYLaborToday.com Photos) told the Nurses.  “This is ‘an assault on our kids because you work with our most vulnerable.’  The Board ‘should respect this.’  ‘You have the expertise and passion.’  ‘That’s the bottom line.’” 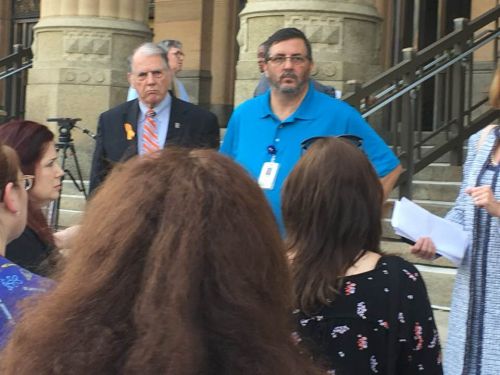 1199 SEIU’s Scordato said his Union had reached out to the BTF and others in the Buffalo Labor Movement for support, “who have all been there and continue to do what they do.”

“From asthma to insulin, ‘no others will be able to take care of (schoolchildren) like our Nurses do in the City of Buffalo,’” he said.  “I’m ‘hoping (the School Board) understands the value that there is no one else who brings to the table what you bring.’”

Several School Nurses addressed those attending the rally, some with voices who cracked with emotion as the described “being in the front lines” of taking care of city schoolchildren, some who have diabetes and others who have heart conditions.

“Our students’ health ‘should not suffer because of a technicality.’  We’ve ‘provided excellent care without fail for the past thirteen years and we should (not be penalized for a proposal that was submitted) sixteen minutes late,’” one School Nurse said. 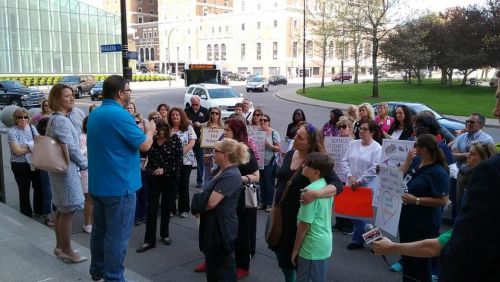 According to The News, Nurses from Kaleida stepped in and took over duties in the Buffalo Public Schools as part of a deal worked out in 2005, after funding for School Nurses was eliminated by Erie County, which had previously provided the service to city schools.  Since then, Kaleida had won the contract with Buffalo Public Schools three times, the last one expiring in 2015, but twice extended.