But The Fight Is Not Over â CWA Area Director Deb Hayes Tells Those At Downtown Rally That Advocates Should Follow The Example Of Teachers Walking Out Across The U.S. To Get What They Want â âItâs Time For Nurses To Do The Same In NYS!â 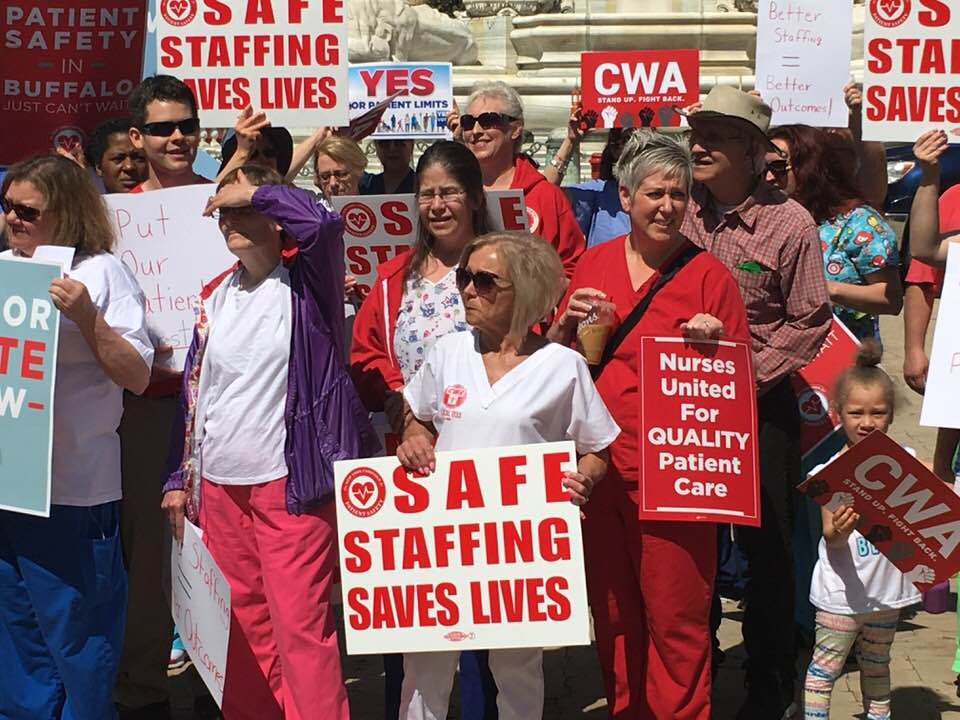 (BUFFALO, NEW YORK) – Scoring a major victory in the fight to get New York State to pass a Safe Staffing Bill for Patient Safety, the Communications Workers of America (CWA) announced during a rally in Downtown Buffalo on Thursday (May 17th) that Republican State Senator Chris Jacobs - Western New York’s only Senator on the State Health Committee, had flipped and signed on as a co-sponsor on the Bill.

Safe Staffing Legislation was first introduced in Albany back in 2004 and passed in the State Assembly in 2016 – but has languished in the State Senate Health Committee for years without a vote.  The Legislation calls for a limit on the number of patients per Nurse in hospitals and an increase in care hours in long-term facilities.  Research has consistently shown that with fewer Nurses working, the rate of patient death and adverse outcomes climbs (For More on The New York Campaign for Patient Safety, Go To: www.campaignforpatientsafety.org).

“We’re ‘thrilled’ to announce Senator Jacobs - who sits on the Senate’s Health Care Committee, as the second Western New York Senator to sign on as a co-sponsor (State Senator Tim Kennedy, who also spoke at the rally, is the other),” said CWA District 1 Area Director Deb Hayes (Pictured Below at the Podium/WNYLaborToday.com Photos) amid a loud round of applause from those who took part in the rally. 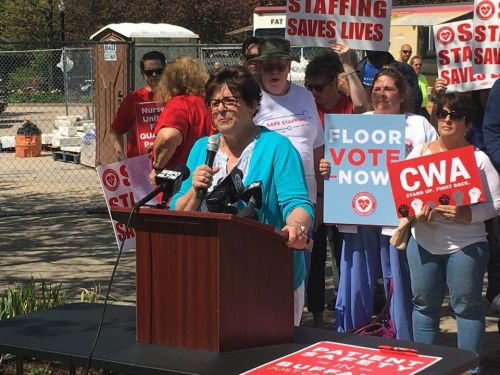 “We ‘continue to pledge our best efforts’ (to get the Legislation passed in New York State and signed by Governor Andrew Cuomo) ‘and further pledge, like so many Teachers who are marching across the United States – that it is time for Nurses to do the same here in New York State!,’” said Hayes, drawing a second round of even louder applause.

CWA Local 1168 President Cori Gambini (Pictured Below - Holding the Red CWA Sign/WNYLaborToday.com Photo), a Registered Nurse herself for the past 34 years whose CWA Local represents 4,600 Buffalo Area Health Professionals, also thanked Jacobs for his about face on the issue - as well as thanking State Assembly Representatives Sean Ryan, Monica Wallace, Crystal Peoples-Stokes and Kennedy for doing the same. 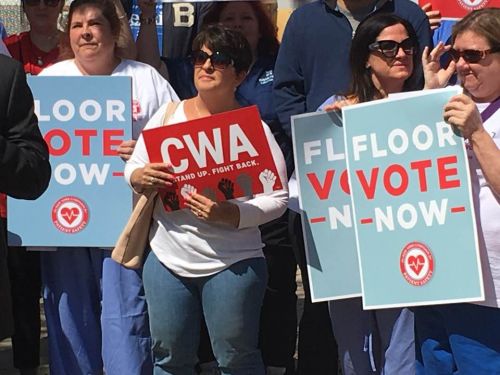 However, Gambini called out Republican State Lawmakers Patrick Gallivan, Michael Razenhoffer and Robert Ortt - all Republicans - for failing to do what Jacobs had done.

“This ‘is not fake news’ - ‘we need to get it passed and we’re not going away.’  ‘We’re ready to get Nurses out of their hospital and into the streets.’  ‘This is for our patients and to make our patients and our communities better!’  ‘We will get it done - now!,” she said.

Jacobs flipped after a year of pressure applied to him by those championing the Safe Staffing Bill.  Twelve months of receiving signed postcards – many by Senior Citizens in support of the Bill, making countless phone calls to his offices – both here in Western New York and in Albany, and countless meetings with Health Care Workers and supportive constituents, the overall effort did indeed turn the tide.

“Safe Staffing ‘saves’ lives,” Gambini said. “Simply put, Nurses ‘cannot be everywhere all the time and the more patients each Nurse is assigned to, the more fragmented his or her attention to care is.’  The research ‘shows’ - ‘and Nurses know’ - ‘that when you don’t have enough Nurses, patients are at risk.’  ‘Patient safety simply cannot wait another Legislative Session.’”

Over the years, hospital lobbying groups have consistently pushed against the Safe Staffing Legislation, claiming it is too costly to implement - but hospitals are penalized by Medicare for infections acquired during a patient’s stay, and for falls and return visits for care for the same condition within 30 days.

Safe Staffing means Nurses would have more time to spend with each patient, which translates to more attention, better monitoring for falls and infections and high quality care, supporters of the Safe Staffing Bill said.

The Legislation would also reduce Nurse turnover, which is very costly to healthcare facilities, which in the end, it is money saved - not lost, they added.

Sarah Buckley, an RN herself who serves as Legislative/Political Director for CWA Local 1168, told those at the rally: “Our opposition ‘often points to the cost’ of this Legislation.  ‘I want to talk about the cost of not passing it and that cost is patients’ lives.’  There is ‘no worse feeling than knowing that more could have been done for a patient.’”

Western New York AFL-CIO Area Labor Federation (WNYALF) President Richard Lipsitz also addressed those at the rally, telling them: “It’s a ‘health and safety question.’  Organized Labor ‘across the region is behind this issue - one-hundred-percent.’  ‘And we will all help keep the pressure on.’”

State Kennedy (Democrat-Buffalo) also addressed those at the rally, as did Coalition for Economic Justice (CEJ) Executive Director Kirk Laubenstein.

Jacobs did not attend the rally, which was held in Niagara Square in the shadow of City Hall – less than 50 yards away from his Downtown Buffalo Offices. 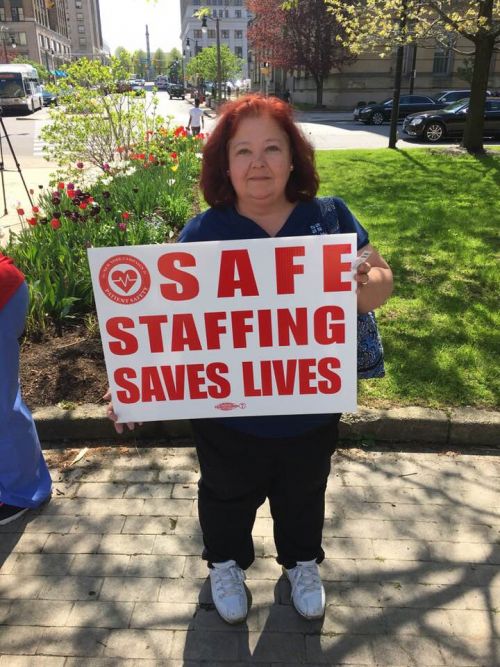 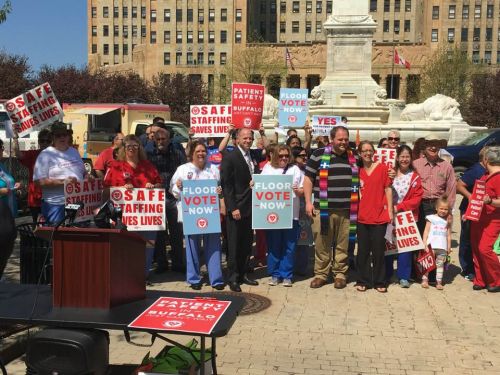 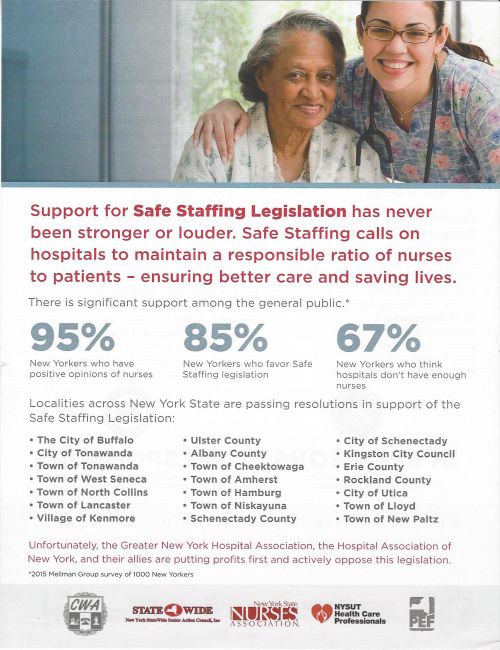 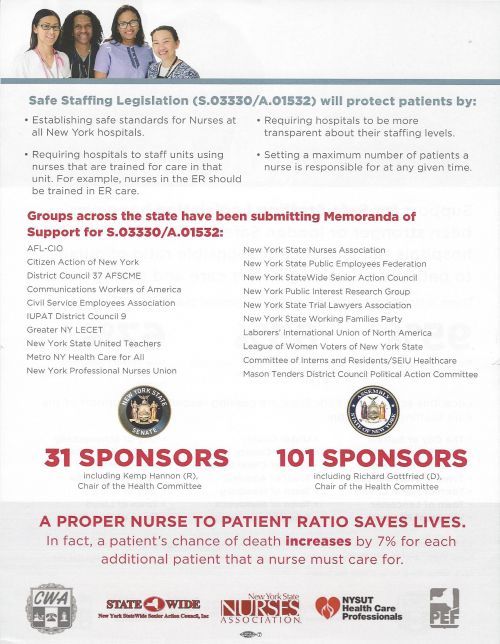