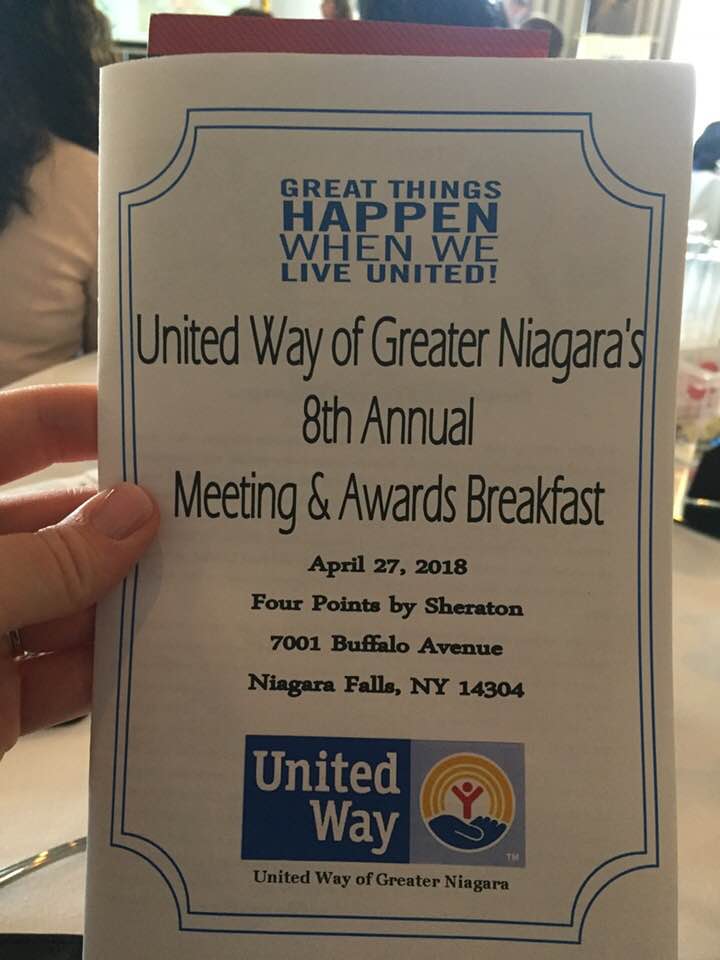 (NIAGARA FALLS) – Organized Labor shined bright at the United Way of Greater Niagara’s Annual Meeting and Awards Breakfast that was held late last week (Friday, April 27th) in Niagara Falls, with the International Brotherhood of Electrical Workers (IBEW), the Civil Service Employees Association, the United Teachers and the United Auto Workers (UAW) all being recognized for the good work they do across Niagara County.

“My job is to ‘help bring’ Organized Labor and the United Way ‘together to improve our community today and strengthen it for tomorrow,’” United Way of Greater Niagara/Niagara-Orleans AFL-CIO Central Labor Council Labor Liaison Bill Jakobi said at the event.  “Each year, Labor ‘plays a significant role’ during the United Way Campaign.  The ‘critical role we play with’ the United Way ‘is to work together to provide and support programs that help Working Families when they are in need the most.’  ‘Advancing the common good means creating opportunities for a better life for all.’  For ‘over’ seventy-five years, the ‘partnership’ between Organized Labor and the United Way ‘is stronger than ever.’” 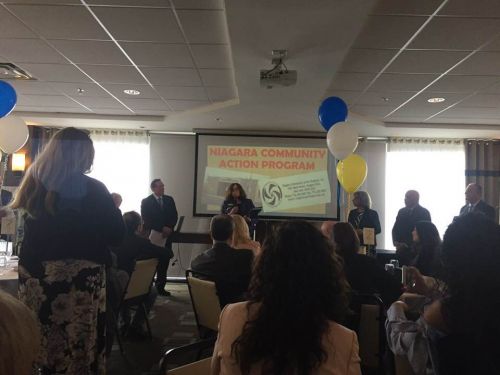 For the past 27 years, the United Way of Greater Niagara’s Labor’s AFL-CIO Community Services Award has been presented to an individual or group for their accomplishments as members of Organized Labor in the performance of outstanding and unselfish work that benefits the entire community.  This year’s recipient is IBEW Local 2104, which represents more than 210 Members who are employed at the New York State Power Authority.

“President Lou Fazzolari and his Executive Board ‘do a great encouraging their Membership to support’ the United Way’s Annual Campaign Drive and ‘take pride in getting involved by volunteering at many of their events.’  ‘When called upon they’re there to help - selling newspapers during the ‘Make a Difference Day,’ our ‘Day of Caring,” (putting up) holiday lights, at our Worker’s Memorial Day Observance and at our Salvation Army Red Kettle Drive Bell Ringing Event,” Jakobi said.

“They also get involved in the community ‘outside’ the United Way, by supporting a ‘cleanup day’ at the North Tonawanda Botanical Gardens, (performing) electrical work and installation of equipment at the Heart Love and Soul Food Pantry, (carrying out) food drives in the plant for food pantries supported by local churches - and they sponsor the Niagara Falls Power Cats Wrestling Club, along with other community organizations.  ‘I can’t think of a group more deserving of this AFL-CIO Community Services Award.’  We in the Labor Movement ‘are proud of what you do and take pride in what you have done,’” Jakobi said.

IBEW Local 2104 President Fazzolari spoke to WNYLaborToday.com after the United Way’s Awards Breakfast, telling Your On-Line Labor Newspaper: “I’m ‘very proud’ of our Members ‘who do the volunteering and the time that it takes.’  ‘We’re just trying to do our part.’  ‘And I want to thank the United Way for the good work that they do.’” 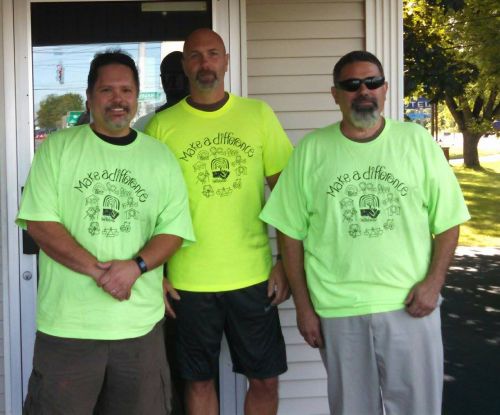 The United Way’s Shining Star Award was presented to IBEW Local 237 Business Quarantello, who Jakobi said: “Has donated his time to the United Way ‘on numerous occasions.’  He’s ‘participated in many’ door-to-door Labor walks and parades.  Russ has also participated on the Board for Big Brothers and Sisters, and he currently sits on the Youth Mentoring Board, the Niagara-Orleans Central Labor Council Board, the Niagara Falls Bridge Commission and the United Way of Greater Niagara.”

Quarentello also spoke to WNYLaborToday.com after the event, telling Your On-Line Labor Newspaper: “This award ‘was really for’ IBEW Local 237, ‘our Members and our Union Contractors’ - NECA (National Electrical Contractors Association) and Ferguson Electric.  The ‘bottom line is without all of them, it wouldn’t get done.’  We have a ‘great bunch’ of Members ‘who step up all the time and will do anything for the communities they live in.’  ‘I also want to recognize the good work the United Way of Greater Niagara does too.’  ‘More people need to support the United Way for the great work that they do too.’”

The United Way’s President’s Award was presented to General Motors Component Holdings’ Lockport operations, which was founded in 1910 as the Harrison Radiator Company for the purpose of designing, manufacturing, and selling automotive radiators and components.  Since that time the company has flourished into a lean manufacturing site that produces a wide compliment of Powertrain Cooling and HVAC Components and Systems.

With almost 1400 UAW-represented Employees, the site is focused on continuous improvement through a joint team process between UAW Locals 686 and 55 and management that works to benefit its employees, company, customers and the Niagara County Community.  The company’s Lockport-based team is a “big supporter” of the United Way, is represented on the United Way Board and is “very active” in community service, Jakobi said.

The United Way’s School of the Year Award was created to honor the Niagara County School District that excelled on supporting the United Way’s 2017 Campaign Drive.  This year’s awardee was the Lewiston-Porter Central School District, along with United Teachers Local 2785, which has worked together to empower and inspire students to achieve academic and personal excellence through rigorous curriculum, collaborative partnerships and resourceful decision-making, United Way of Greater Niagara Officials said.

Photos That Appear With This Labor News Story Are Courtesy Of The United Way Of Greater Niagara, Niagara County Union Activist Amanda Irons-Rindfleisch & IBEW Local 2104 Via The Social Network Facebook.