A Look Back At The 2018 WNY AFL-CIO Area Labor Federationâs Annual Awards Dinner: Activist Of The Year ATU Local 1342 President Jeffrey Richardson âSteals The Show,â Says The âJanus Case Can Go To Hell!â

Why So? Richardson, Whose Union Finally Got A New Contract With The Niagara Frontier Transportation Authority After A Long Nine-Year Battle, Tells Those In Attendance Because âFive Fingers Put Together Makes A Fist - Weâre Stronger As One!â 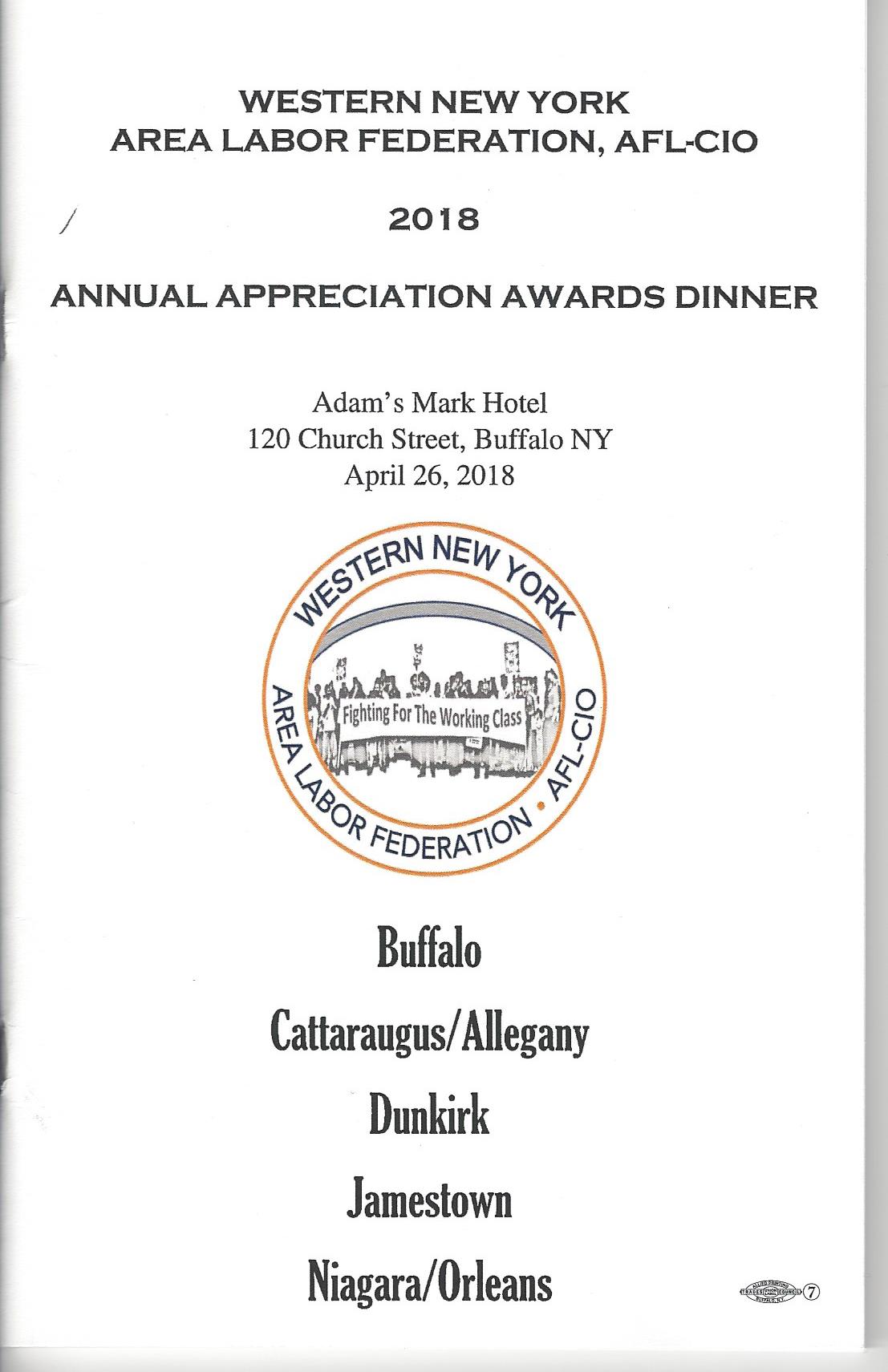 WNYLaborToday.com Editor’s Note: Pictured below, a glimpse of some of the 500 Unionists, Community Organizations, Elected Officials and Friends of Labor who gathered together on Thursday (April 26th) at the Western New York AFL-CIO Area Labor Federation’s 2018 Annual Awards Dinner in Downtown Buffalo to celebrate the many positive efforts and results brought about by Organized Labor over the past 12 months.  (WNYLaborToday.com Photos) 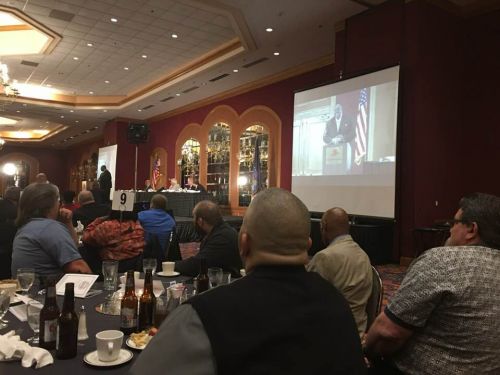 The ballroom of the Adam’s Mark Hotel overflowed with Union Leadership, Delegates and Representatives from across Western New York, who were joined by an array of Community Organizations, Elected Officials and Friends of Labor to celebrate the many positive efforts and results brought about by Organized Labor over the past 12 months.

“The Union Movement in Western New York ‘is strong in the face of national instances of assaults’ on Worker and Civil Rights.  We ‘stand on the firm foundation of our Union principles,’” WNYALF President Richard Lipsitz (pictured below) told those in attendance.

National American Federation of Teachers (AFT) President Randi Weingarten, the dinner’s keynote speaker, could not personally attend the dinner, but sent a video message from Puerto Rico where the AFT has involved itself in a fight to stop the privatization of public schools.

In her message, Weingarten (pictured below, on screen) apologized for not being physically there to address dinner attendees, but when on to tell them she recognized the “Labor Solidarity in Western New York in people’s quest for a better way of life, that they need raises of ($5 to $10) an hour.”

“(Organized Labor) is having a ‘renaissance.’  You ‘get what solidarity means.’  You have done what is impossible alone,” said Weingarten, who wore a dark t-shirt with the words - Basta Ya!, which means: Enough Already!, printed on the front.

But it was the WNYALF’s 2018 Activist of the Year Award winner, ATU Local 1342 President Richardson (Pictured Below, seated with his award, and surrounded by his fellow ATU Local 1342 Staff and Executive Board/Photo Courtesy of Joe Ziewicki Via Facebook) who stole the show in an emotional show of Union humility, retrospect and praise. 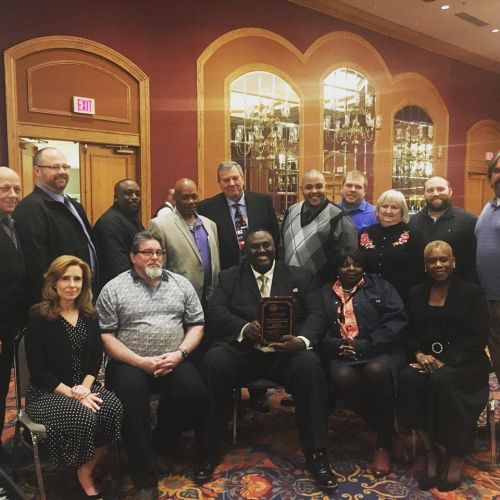 Richardson, who took the time to individually thank those Unions in attendance who stood with and supported the ATU during its extraordinarily long battle with the NFTA, detailed his inner drive to be part of his Union, climbing the ranks from Member to Stewart to Vice President and eventually President.  He also took the time to thank each and every one of Local 1342’s Staff and Representatives, as well as his wife, children and family for the role they played in supporting him and his efforts while being involved in and representing his Union over the years.

“I ‘appreciate’ you,” he told those Union Representatives in the room in what only could be described as a very heartfelt and appreciative tone.

Then focusing on the battles to come, including what Public Sector Unions face with the upcoming rendering in the U.S. Supreme Court regarding the Janus v. AFSCME case – which could allow Union Member to opt out of paying Union Dues, but still receive Union Representation in the workplace, Richardson said to thunderous applause: “‘Five fingers put together makes a fist!’  ‘We’re stronger as one!  Janus can go to hell!’”

The WNYALF also took time to honor the New York State Public Employees Association (PEF) and the role it played in helping keep the Western New York Children’s Psychiatric Center (WNYCPC) in West Seneca.  The WNYCPC was targeted by the State to be moved to the Adult Buffalo Psychiatric Center, but a five-year campaign not only kept it in the Buffalo Suburb, but finally got Governor Andrew Cuomo to change his mind and agree not merge in into the adult facility (For more, read WNYLaborToday.com’s April 10th Labor News Report Headlined: Exactly What Was It That Ended A Nearly Five-Year-Old, High-Profile Fight With New York State That Now Keeps The WNY Children’s Psychiatric Center In West Seneca?).

PEF Statewide President Wayne Spence, Retired PEF Representative Dave Chudy Retiree - who played a major role of being the coordinator of the group Save Our Western New York Children’s Psychiatric Center, and PEF Interim Region 1 Coordinator Stephanie McLean-Beathley were on hand to accept the WNYALF Award.

A number of extremely high-profile Elected Officials were also in attendance, including: Lieutenant Governor Kathy Hochul of Buffalo; New York State Comptroller Tom DiNapoli; and State Attorney General Eric Schneiderman, who told dinner attendees that “now is the time to rise” and that should be “inspired” by the recent and great amount of Unionized Teachers Strikes across the country.  “I’ll be there ‘with you (fighting against the many attacks on Unions and their Members) every step of the way,’” Schneiderman said.

A number of other Local Government Leaders, as well as candidates of the upcoming Federal, State and Judicial Elections also attended the dinner.