(CHEEKTOWAGA, NEW YORK) – Continuing to call attention to Labor problems at the Wendt Corporation’s Suburban Buffalo Plant, Area Union Leaders Wednesday (April 25th) joined with the newly-Unionized Workers outside the company’s Cheektowaga facility to not only highlight their lack of a first contract - but focus a spotlight on alleged unsafe working conditions at the manufacturer of scrap recycling machinery.

Last year in the United States, more than 5,000 Workers died on the job, with an additional 50,000 to 60,000 Workers passing from Occupational Illnesses, WNYCOSH Officials said. That’s more than 150 Workers per day, they added, saying “many of these deaths are classified as accidents, but often are caused by employer’s choices to speed up production or cut costs.”

During the rally outside the plant, Wendt Workers charged their employer with allegedly and routinely putting their health and safety at risk.  Until recently, Wendt Corporation’s training was “informal,” with few, if any, true safety procedures or programs, they said.

However, after nine months of pressure coming from their Workers in the shop and concerned allied Labor and religious community groups, Wendt management has finally begun to address the Workers’ health and safety concerns, those speaking at the rally said.

The Wendt Workers, meanwhile, said they are “concerned that without a fair contract that provide for guarantees for improved safety measures, training and other important practices, the company will return to treating the working conditions of their Employees as an afterthought.”

And the Workers said they’ve been responsible for their own well-being, despite the Federal Occupational Safety and Health Law that mandates it is the employer’s responsibility to “provide a safe workplace.”

Wendt Machine Operator Noel Pauley said: “I ran the saw table all by myself, which shouldn’t been done.  Because if you know the set of that building, the burn table is upstairs, and I was in shipping and receiving.  No brake press guy.  I was the only one up there.  If something happened to me, there’s nothing I could to do.  No screaming to scream for because everybody is downstairs in the building.  It is a different area. You gotta drive up a ramp through garage size door to get to where the burn table is.  At night, I was up there all by myself.  I could have died.”

Wendt Welder Scott Rammacher added: “It’s a physical job.  You can get hurt, seriously hurt.  Some of (the pieces) weigh (175) pounds just a piece.  To move them around we use a magnet. The magnet is an old magnet (and it) can give out anytime.  Even my Co-Workers would tell you, ‘Be careful because I had one drop on my leg.’  He has a gash on back of his leg.  So it does happen.  Accidents do happen when you push sometimes, because they’re coming in they are warped or they got a bow in them.  You are trying to push, you could push ten of them and they can slide like this, but you get the one that catches.  It can throw your back out.  That’s what happened to one guy, he threw his back out.” 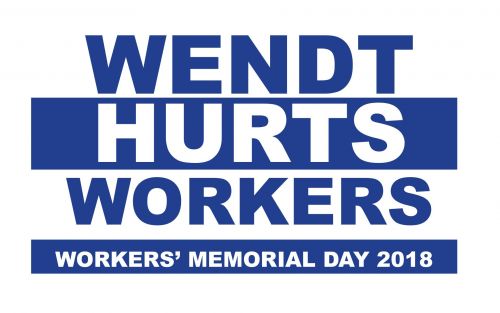 Meanwhile, James Wagner - a Community Organizer for the Ironworkers Shopmen’s International, provided an update on the Workers efforts to negotiate their first contract.

“After thirty-five negotiations sessions, ‘we are no closer to achieving a contract,’” Wagner told those in attendance at the rally. “Something’s ‘wrong’ here.  This employer ‘has no intention to honor their Employees who want a Union.’  ‘They’ve gone on record saying that.’  ‘We have great concern working inside (Wendt) is not a safe shop.’  ‘Things need to be fixed inside that plant.’”