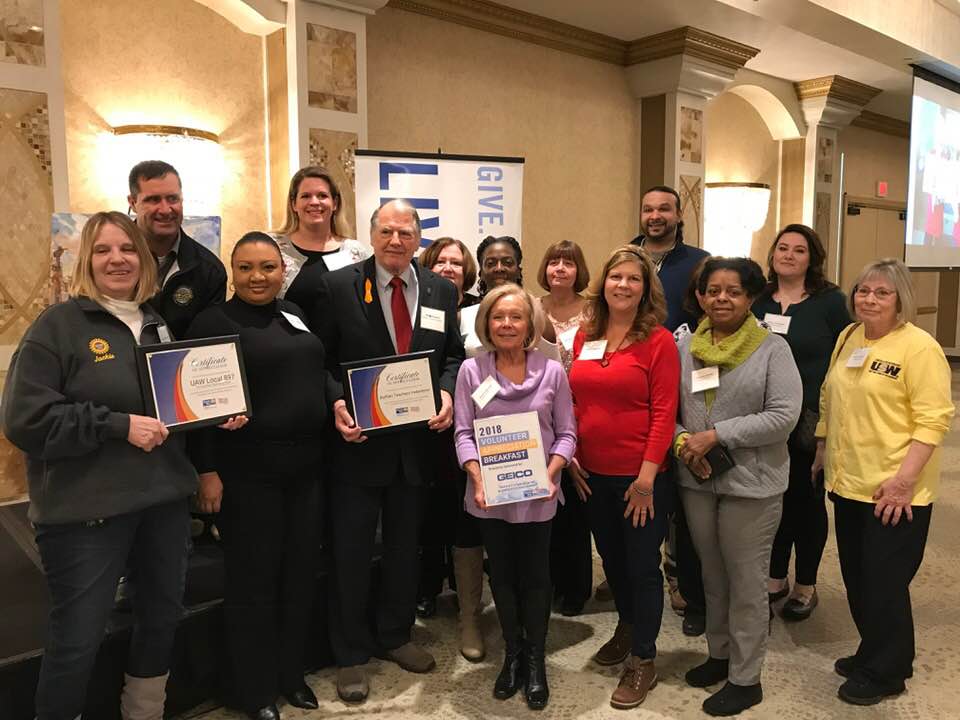 The United Way’s Annual Volunteer Breakfast, which was held on Tuesday (April 17th), yearly recognizes the work of volunteers across the Buffalo Community who are the “driving force” in the organization's success, United Way Officials said.

The United Way Labor Campaign Award was presented to UAW Local 897, the Union that represents Workers at the Ford Stamping Plant in nearby Hamburg.

UAW Local 897 was recognized for a number of accomplishments, including: Development of a highly-effective campaign structure with two Employee Canvassers who were selected to represent each of the auto manufacturing plant’s shifts.  These individuals were allowed off the production lines for one to two weeks in October to focus strictly on distributing pledge forms and educating their peers on the United Way; and for consistently inviting the United Way to present at new hire orientations in order to educate new Employee/Union Members on the UAW-United Way partnership.

Since 2013, management at the Ford Stamping Plant and the UAW have worked together to increase participation within the plant from 17% to nearly 50% in 2017 - and since 2013, both sides have increased annual employee campaign donations by 135%.

For more than 75 years, the United Way has taken great pride in its partnership with the Buffalo Area Labor Movement, sharing a common vision of prosperous, inclusive, diverse and safe communities, where every Member of the community has access to a quality public education, fair wages, productive work opportunities and accessible, affordable, quality health care, United Way Officials said.  Through this partnership, contributions from both active and retired Union Members make it possible for the United Way of Buffalo and Erie County to make the Buffalo Community stronger, they added.

Meanwhile, the United Way of Buffalo & Erie County also announced this week that a grand total of more than $21.7 million in donations had been raised during its 2017 fundraising campaign - which represents a significant increase from the previous year.

The total comes from a combination of Employee Workplace Campaigns - including those undertaken by Buffalo Area Labor Unions and Organizations, corporate and foundation support, endowment gifts and new grant acquisitions.