Exactly What Was It That Ended A Nearly Five-Year-Old, High-Profile Fight With New York State That Now Keeps The WNY Childrenâs Psychiatric Center In West Seneca?

(WEST SENECA, NEW YORK) – Was it divine intervention or just a perfect storm of factors?  Who really knows, but whatever it was that finally changed the mind of Governor Andrew Cuomo was extremely welcomed news by those who have been in the forefront of the battle to keep the Western New York Children’s Psychiatric Center (WNYCPC) in West Seneca, including those from the Labor Movement - which fought hard and long for the past five years from having the WNYCPC merged into the Adult Buffalo Psychiatric Center.

“It ‘just came out of the blue and it was absolutely remarkable,’” an emotional Dave Chudy - a New York State Public Employees Federation (PEF) Retiree who played a major role of being the coordinator of the group Save Our Western New York Children’s Psychiatric Center, told WNYLaborToday.com after the governor’s official announcement came last week.

A coalition of Unions, including PEF and the Civil Service Employees Association (CSEA), parents and children, community groups and elected officials from both sides of the aisle came together to successfully bring about a reprieve to the New York State Office of Mental Health’s (NYSOMH) plan to close the tranquil and wooded WNYCPC that serves children as young as four years old and merge it into the Adult and urban Buffalo Psychiatric Center, which also houses adult sex offenders on its grounds.

“I was ‘extremely surprised, almost flabbergasted,’” PEF Statewide Secretary-Treasurer Kevin Hintz remarked to Your On-Line Labor Newspaper.  “It was a ‘combination of things that worked in our favor, but it was a perfect example of a group effort’ - PEF, the CSEA, the parents, their kids, the elected officials - ‘it was a total community effort and when that happens, good things happen.’”

“It is ‘incredible and I am so thrilled with (Cuomo’s decision),’” CSEA Western Region President Flo Tripi (Pictured below at the podium with PEF's Dave Chudy behind her wearing the yellow scarf/WNYLaborToday.com Photo) told WNYLaborToday.com.  “I have ‘no idea if it was’ (divine intervention), and I ‘do not know what changed (Cuomo’s) mind, but I am perfectly happy about it.’  We worked ‘for so long, but got it done.’  ‘Keeping it in the forefront (the WNYCPC) was such a success story.’  ‘We were able to keep it alive year after year.’  PEF and CSEA were ‘wonderful working together, as well as everyone involved.’  I am ‘absolutely delighted for the families and their children, which (the WNYCPC) was specifically built for.’” 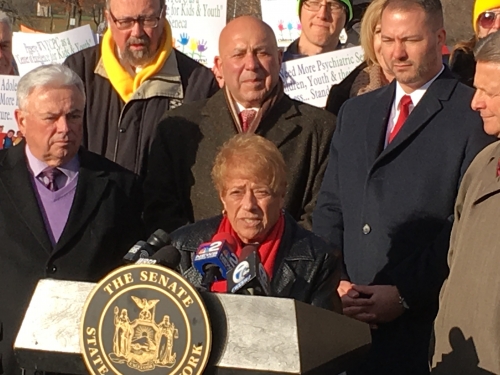 After the long, five-year fight, Governor Cuomo announced - out of the blue - the WNYCPC would permanently remain operating in West Seneca, following what was described as “extensive community input” into a proposal to relocate the facility to within renovated space at the Adult Buffalo Psychiatric Center.

As part of the State plan to keep the WNYCPC where it is, Cuomo also announced the State has identified “other resources to support services for up to 1,000 children outside a clinical setting that would have been funded through the cost savings resulting from the relocation plan.”

"The Western New York community has consistently spoken with one voice and we are listening," Governor Cuomo said in a released statement. "The new plan for the (WNYCPC) will ensure the same level of care for Western New York families while addressing the concerns of the community.  We have made great progress in ensuring access to vital mental health services for all New Yorkers, and this plan will uphold our commitment to the children and families of this State.  I am grateful for the input and engagement from the community and will continue to work with them to ensure the highest quality of care for our children."

The WNYCPC, which opened in 1970, serves 19 Western New York Counties and has been there over the years for a countless number of emotionally disturbed children between the ages of four and 18.  In addition, the WNYCPC received a 99% rating in 2012, as well as special designation in being in the top 10% of all hospitals accredited by the Illinois-Based Joint Commission across the United States, and has the lowest re-hospitalization rates in New York State out of all children and adult facilities.  The Joint Commission is an Independent/Non-Profit Organization that accredits and certifies more than 20,000 health care facilities and programs, mostly hospitals, in the country - both public and private.

“I ‘don’t know if it was divine intervention, but it certainly came as a miracle.’  ‘I don’t know if we will ever know the real reason of how it all came together.’  ‘I was so overjoyed I broke down.’  ‘I hope the Governor takes our suggestion about creating an opioid treatment center with the Buffalo Psychiatric Center, which we recommended to the State,’” PEF Interim Region 1 Coordinator Stephanie McLean-Beathley told WNYLaborToday.com.  “Five years is ‘a long time to fight for something, but we were consistent with our message - and from Labor’s perspective, we did all the things right through an organizing and mobilizing approach.’  ‘In the end, I don’t care why.’  ‘We all did the right thing for the children and their families are happy.’”

“After a long battle, I am thrilled services will remain at the West Seneca facility,” former Western New York DDSO Local President Tom Weston, whose CSEA Local covers the WNYCPC, told the CSEA’s Workforce Blog. “I am very proud of all our Co-Workers and community partners who didn’t give up the idea that it was best to keep things in West Seneca intact.  This is a huge win for the families and Workers of Western New York.”

“This ‘wasn’t just one or two people - it was a whole team: the Unions, the Legislators, the families and their kids - they were our inspiration, and the entire community,’” said PEF Local 167’s Patty Moran (Pictured below, second from the right - with PEF's Tom Weston standing to her left/WNYLaborToday.com Photo), who serves as the Local’s Assistant Council Leader and Coordinator of Volunteers, as well as the WNYCPC’s Public Communications Officer.  “And it was the WNYCPC families ‘who saw the importance of the Unions and asked for their help.’  ‘They developed an appreciation for our Unions and we all came together.’”

As CSEA Western Region President Tripi said, a third straight year of lobbying success allowed for funding for the WNYCPC in the 2016-2017 State Budget, keeping it open until the end of March 2017.  However, NYSOMH stood firm on its mission to downsize the number of psychiatric centers in the State, which was first unveiled back in July 2013 and when its plan was publicly learned to move WNYCPC and incorporate it into the adult Buffalo Psychiatric Center, despite continued a continuing waterfall of public and patient backlash that there was no real need to move the Children’s Center from its sprawling, wooded and tranquil base of care in rural West Seneca into a urban location where adults were also housed.

All of the Labor Leaders and Representatives whom WNYLaborToday.com interviewed had high praise for so many individuals who involved themselves in the overall effort, notably PEF’s Chudy - who put his retirement on hold and battled back himself from back surgery, and several State Elected Officials, including Patrick Gallivan, Mickey Kearns and Robert Ortt, to name but a few on a very long list of Thank You’s.

“Dave Chudy is ‘my champion.’  It was a ‘full-time job for him.’  ‘And I’m thankful for Kevin Hintz and (PEF President) Wayne Spence (Pictured below/WNYLaborToday.com Photo).’  ‘We’d do it all again, because it was for the kids,’” PEF’s Moran said.  “But it was the families, ‘who spoke from their souls, which got more people to listen - including that ‘one’ person.’”

“We ‘won?’  ‘It really hasn’t totally sunk it as yet,’” added Chudy.  “But I ‘can’t help but tear up about the effort and what it mean to those kids and their families.’”

Chudy did share one other story with WNYLaborToday.com, saying he received a telephone call from an individual who explained “he had terminal cancer and that his wife has double breast cancer.” “He said ‘Thank You’ for ‘all the hard work and that he was grateful for people like us.’  ‘But I keep going back to the kids, including the ones who publicly spoke out.’  ‘It was their courage.’  ‘We couldn’t give up,’” Chudy said.

But right now, that all sounds like ancient history to those who battled so hard to keep the WNYCPC in West Seneca, including some - notably PEF’s Moran - who offered an olive branch to Governor Cuomo, inviting him to finally visit the center for himself, and take the time to place his hand in colored paint before pressing it up onto a wall to leave an impression - just like so many other children have who walked through and then out of its front doors changed persons.