Union Dues: Certified Nursing Assistant Says Union Dues âAre The Best Investment A Worker Can Make To Have A Voice On The Job, Ensure Fair Treatment & Have Someone To Fight For You When There Are Problemsâ 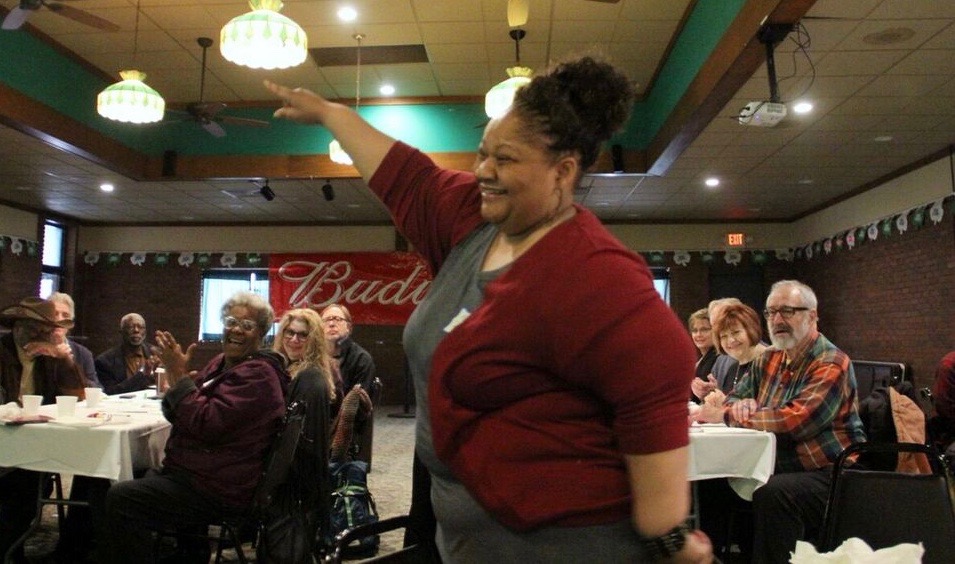 (FERGUSON, MISSOURI) - “Union Dues ‘are our best investment’ - UNION!” was the victory cry of Brenda Davis, a Certified Nursing Assistant (CNA) and Shop Steward, speaking at the Faith/Labor Alliance breakfast where she expressed the joy of Workers winning a new contract at Christian Care Home in Ferguson after a 104-day Unfair Labor Practices (ULP) Strike.

To a standing ovation, she praised her fellow Workers for standing together, and thanked their Union, Service Employees International Union (SEIU) Healthcare Missouri, the St. Louis area Labor Movement, Faith Leaders, local politicians and community residents for their support during the difficult Strike by the nursing home’s Workers who decided they’d had enough of low pay, walked out and stood together in a Strike that stretched through the holidays and in severe cold weather.

“We ‘could not have done it without your support,’” Davis told the more than 80 Faith, Labor and Community Leaders at the breakfast meeting at Maggie O’Brien’s restaurant in downtown St. Louis in late March.

Davis paid tribute to the Workers at Christian Care Home for their unity in the face of tough times, and their Union for its support.

She had special praise for SEIU Healthcare Missouri Director Lenny Jones, who kept them energized and focused.

Davis and Jones and several of the workers attended the St. Louis AFL-CIO Labor Council’s delegates’ just days before to discuss what they’d accomplished and thank fellow Union Members and Faith Leaders for their support.

About 65 full-time and 25 part-time Nursing Assistants, Housekeepers and Dietary Workers at the home went on strike on December 1st after contract negotiations with the Christian Woman’s Benevolent Association, which manages the home, broke down.

SEIU Healthcare had been trying to negotiate a new contract since July - but management refused to negotiate in good faith.

The Union filed an Unfair Labor Practices (ULP) complaint against management of the home charging management violated the conditions of the workers’ existing contract by making unilateral changes to staffing, hours and scheduling without bargaining with the Union.

It was the Union’s filing, and winning, of the ULP charges that forced the home’s management back to the bargaining table.

The St. Louis Regional Office of the National Labor Relations Board (NLRB) found merit to the multiple ULP charges, as well as charges the Christian Care Home unlawfully threatened to fire Employees for joining the Strike and unlawfully denied Strikers accrued benefits after the start of the Strike.

To Continue Reading This Labor News Story, Go To: https://labortribune.com/union-dues-workers-best-investment/