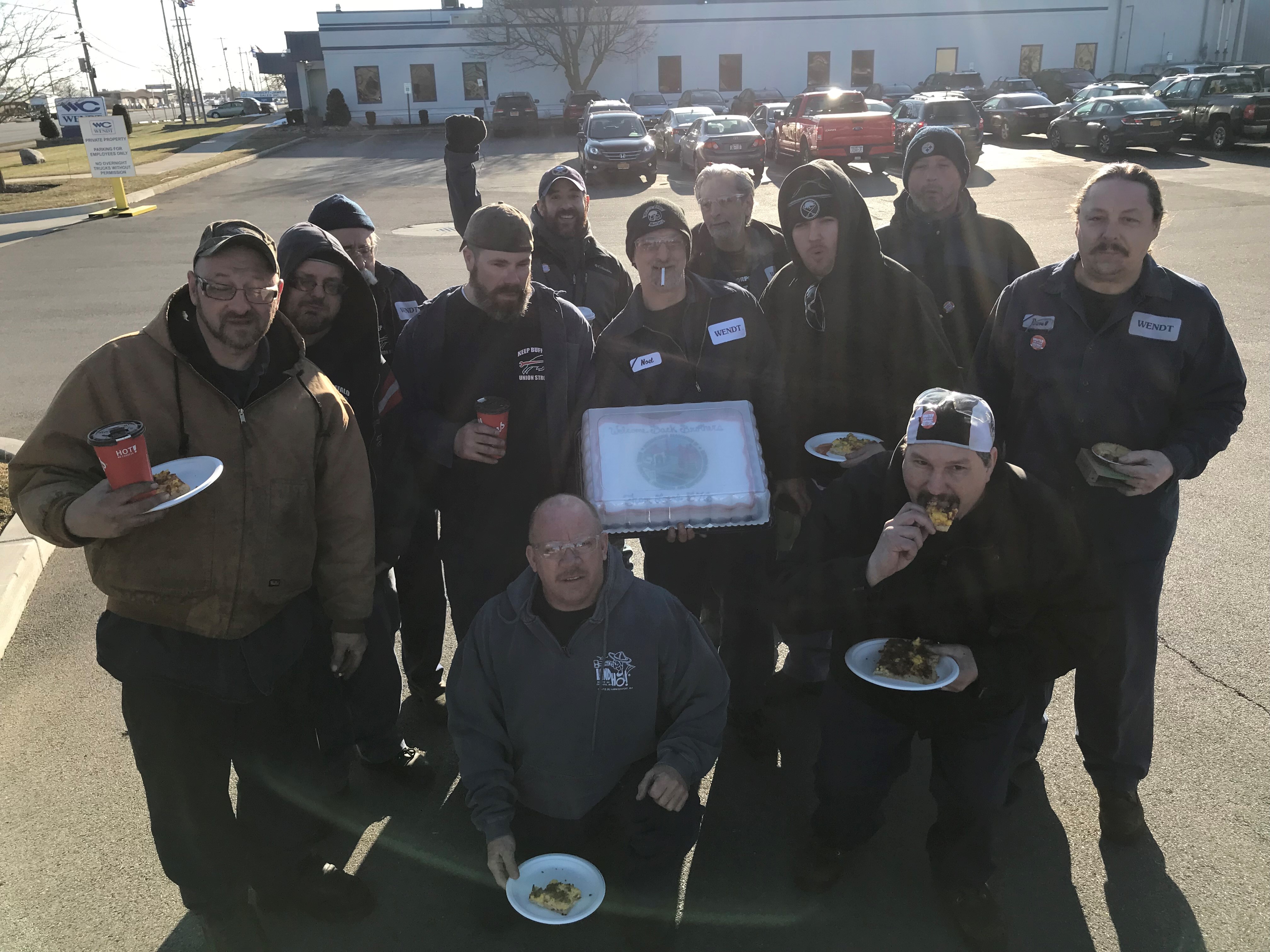 (CHEEKTOWAGA, NEW YORK) – Unjustly laid off Workers employed at the Wendt Corporation, whom Union Officials said was a blatant attempt to break the newly-formed Union, celebrated their return with a cake, but vowed to ratchet up their community campaign as contract negotiations finally resumed this week - with another session scheduled for Tuesday (April 10th). 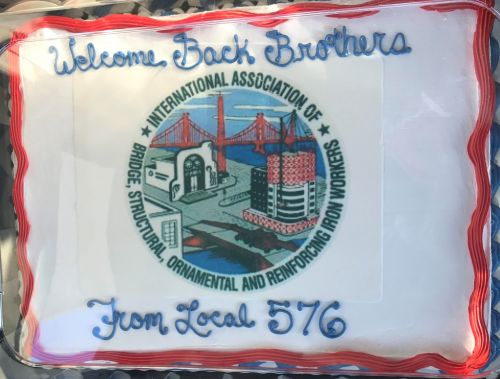 “We celebrate going back to work, but we realize and understand that without support for each other and the solidarity from countless others, we wouldn’t be here today,” recalled Wendt Worker Dennis Bush said in a released statement.  “We’re celebrating going back to work, but our real work continues.  Wendt thought they could break us by laying us off.  They thought we were disposable and that we would all just go away quietly.  They were wrong, again!  We got stronger!  We have learned that we are the UNION.  We are mobilized, organized and united.  We continue our fight inside and outside the Wendt shop floor in our collective effort to secure our fair first contract.  One day longer, one day stronger.”

James Wagner – a Community Organizer for the Ironworkers Shopmen’s International, told WNYLaborToday.com on Friday (April 6th) that contract negotiations resumed this week, with another scheduled session to occur on Tuesday (April 10th).

However, Wagner said, the resumption of negotiations does not mean the situation has taken a turn for the better.  In fact, as talks continue, the Union will continue growing support and ratcheting up its community campaign targeting the company - a manufacturer of scrap recycling machinery, including hand-billing at an Industry Trade Show that will be held later this month in Las Vegas where Wendt Representatives are expected to attend.

“The company has been ‘dragging its feet’ in negotiations,” Wagner told Your On-Line Labor Newspaper.  “But the layoffs brought about a ‘building of solidarity, both inside and outside the shop.’  (The layoffs) were ‘surely designed to drive a wedge’ between the Workers and their Union.  ‘It failed.’  In fact, we were able to ‘turn around this issue and turn it into a positive.’  These Workers are now ‘Union Activists.’  Their morale ‘couldn’t be stronger.’  ‘This is Buffalo.’  We’re a ‘Union Town.’  And ‘we stick together.’  These Workers ‘have been bullied,’ they’ve been ‘harassed on the job’ and laid off.  But when you are ‘faced with a bully,’ you call on your family, friends and neighbors – and ‘stand up together.’” 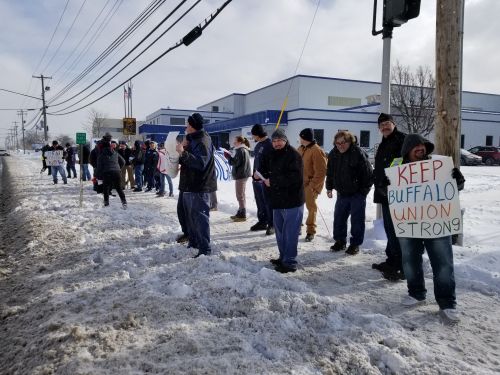 Standing together, as Wagner described it, has come in the form of: “Hundreds of letters of support that have been hand-delivered in mass directly to the Wendt Corporation’s leadership,” the filing of Federal Labor Charges against Dimar, a Wendt supplier for allegedly black listing Wendt Workers seeking employment; Reaching out to, meeting with and participating in a number of efforts, including addressing Labor Leaders in attendance at the recently-held Western New York AFL-CIO Area Labor Federation’s annual meeting and marching alongside other Union Members in Buffalo’s St. Patrick’s Day Parade. 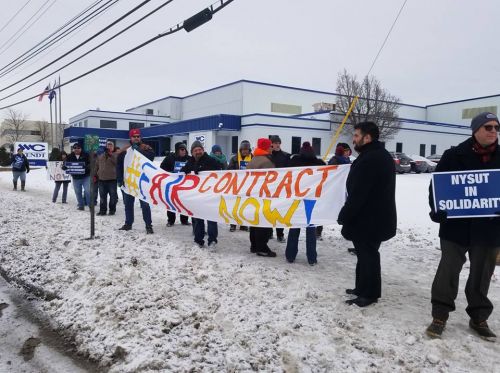 In addition, the Wendt Workers has received support from BWI, a Global Labor Federation that has lent its support.  The group has also garnered widespread media attention that has focused greater attention on their plight, Wagner said.

The Wendt Workers will also be making a trip to Las Vegas later this month to attend an Industry Trade Show that the Wendt Corporation and its representatives will also be attending in order to take the opportunity “to make those aware in the industry and whom Wendt does business of ‘how this company treats its Workers,’” Wagner told WNYLaborToday.com.

“We voted in June (2017) - ‘yes’ for the Union,” said Wendt Employee Mark Castilloux - a Machine Operator at the company, in recent testimony given to the Buffalo Truth Commission on Poverty. “We got (70%) of the vote there.  We’re ‘Union Strong,’ but it’s been six months and ‘we still don’t have a contract.’  I feel as though the company ‘isn’t doing the right thing.’ (The company say) they’re ‘planning on laying us off.’  I feel as though that’s a ‘scare tactic and intimidation’ due to the fact that we want the contract.  ‘It’s caused a lot of turmoil’ and we’re asking Wendt ‘to do the right thing.’”

Wendt is a privately-owned company, headed by President Thomas Wendt, Jr.  It has major contracts and partnerships domestically and across the globe, with estimated annual revenues of $37 million, according to materials provided to WNYLaborToday.com by the Union.

A number of community leaders and groups are supporting the Wendt Workers, criticizing the fact the company was awarded more than $4.8 million in tax credits and exemptions since 2004 through New York State’s Empire Zone Program.

In addition, Wendt was also awarded state-subsidized electric power through the New York Power Authority’s ReChargeNY Program, which was awarded on agreeance the company would “create jobs and raise investment.”