Read This âPowerful Story Of Why Sticking With Your Union Is So Importantâ â Western New York Teacher Michael Desing âNot Only Beat Cancer, He Has A Million Reasonsâ For 'Sticking With The Union' 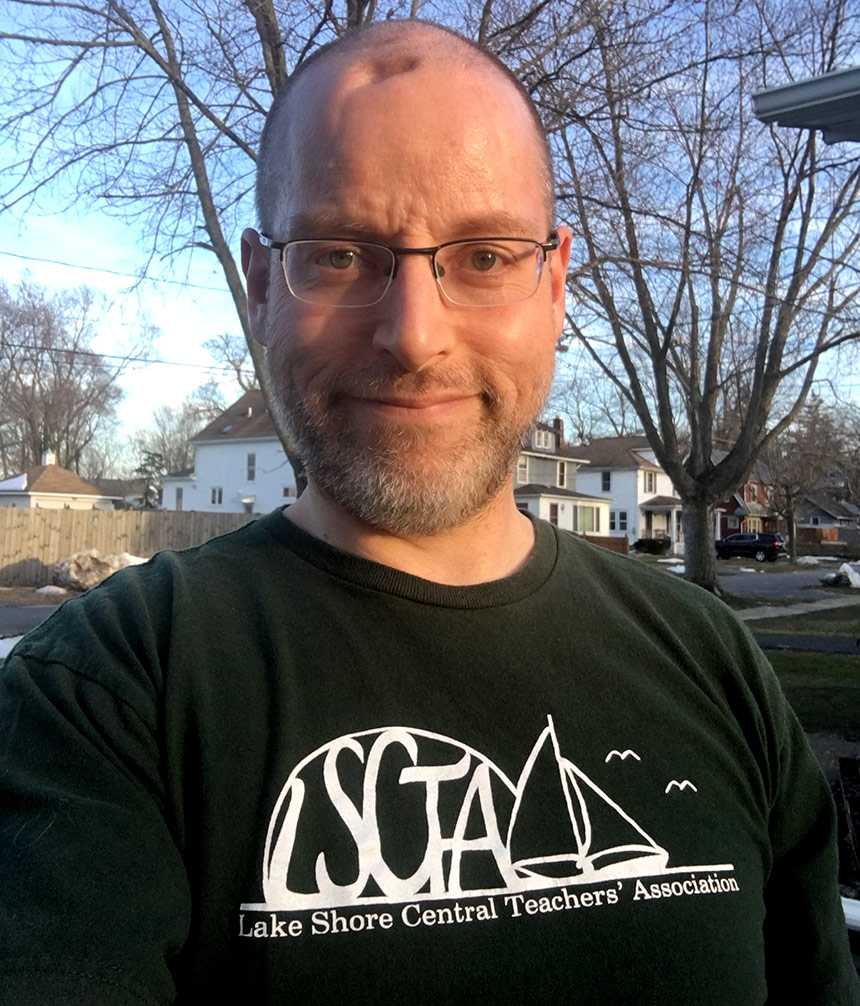 (ANGOLA, NEW YORK) - You might say Michael Desing wears the mark of the Union.  It’s a long, deep, indented scar on top of his head.

In Fall 2014, this High School Teacher from Western New York was on a dedicated personal and career path – a wife, a child, teaching English, two Master’s Degrees and heading toward a Ph.D., and running three miles a day - when doctors found what Desing (Pictured above, proudly displaying his surgery scar and his Lake Shore Central Teachers Association shirt - Photo courtesy Michael Desing) called a “time bomb” tucked up in his nasal cavity.  No, it wasn’t a sinus infection causing his headaches and stuffiness.  It was a tumor.

A neurosurgeon informed him he had a “very, very rare form of brain cancer” at the base of his skull.  If the cancer was in the bone, he probably wouldn’t live.

Desing got his affairs in order.  “The ‘worst day was when I recorded a video for my daughter in case I didn’t make it,’” he said.  Grace was five years old - a budding gymnast with shiny black hair.

But there was also this: the day he realized that if he did survive, his needs would be met because of benefits negotiated by his Union, the Lake Shore Central Teachers Association.

He had health insurance.

His job would be protected while he was out for a long recovery.

And he would be able to use sick days donated into a sick bank by colleagues - thanks to the Union.

Bringing him peace of mind, too, was knowing if he did succumb, his wife Mary would be covered by a death benefit that was part of his negotiated benefits.

“All of those things ‘were benefits my Union fought for,’” he said. “The ‘knowledge that my wife and daughter would be taken care of was one layer of stress I didn’t have at all.’”

Desing’s first surgery was pulled back after doctors discovered his lungs were still weak from a bout of bronchitis.  He never made it to his second scheduled surgery - between his home and the hospital, he and his wife hit “a wall of snow” and they were trapped in their car for eight hours before finally spending the night in a nearby Ford plant.

His eventual November surgery took between 16-to-18 hours.  He was buzzed cut on the top of his head, from ear to ear.  His skull was taken apart.  When he woke up 22 hours later, tied to the bed and breathing through a tube, Desing panicked.  He recited Shakespeare’s “To be or not to be” - a soliloquy he’s overtly fond of - to ensure his brain was working.  He was checking for timing and processing.

When he finally got home four days later - his face swollen and one eye black and blue, 55 stitches adorning the top of his head like a railroad track - his daughter told him he looked like Frankenstein.

As he recovered, colleagues came to rake leaves and bring food.

It’s another point in the conversation where he becomes choked up.

The sidelined Teacher next had to endure six weeks of “mentally fatiguing” radiation to his brain. He made a video during one treatment to show students at school, where funds are regularly raised for Buffalo’s Roswell Park Comprehensive Cancer Center as part of a regional program called Bald for Bucks, started by teacher Tony George, who serves as resident of the CTA.

George notes the irony: “He (Michael) was ‘one of the first people to shave his head with me seventeen years ago.’”

Ten months later Desing was teaching summer school.  His head has healed and his spiritual life has deepened.  He’s back to his full life - minus any smell receptors and with half of a sense of taste.  He’s running, earning his Ph.D. and choosing books for classes.

Right now his students are reading the novella: “The Metamorphosis,” by Franz Kafka and “The Things They Carried” by Tim O’Brien.

Recently, Desing joined his colleagues at a Union meeting.  CTA President George was explaining how Union Benefits far outweigh dues and encouraging Members to sign up anew for their Union Membership in the face of the pending U.S. Supreme Court Janus v. AFSCME case aimed at dismembering Public Unions.

He let that sink in.

“My ‘co-pay was ($500).’  I was able to call Roswell ‘the same day and use my Flex (Pre-Tax, Medical Spending) Card, which the Union had fought for, and pay that off.’  ‘If I didn’t have this Union, I would’ve lost my home and my job.’  ‘If cancer hadn’t destroyed me, it would’ve still ruined my life.’”

He got a standing ovation.

And the Lake Shore CTA is closing in on 100% of Members who’ve signed their Union Cards again.

To Directly Access This Labor News Story, Go To: https://www.nysut.org/news/2018/march/lake-shore-teacher-has-a-million-reasons-for-sticking-with-our-union