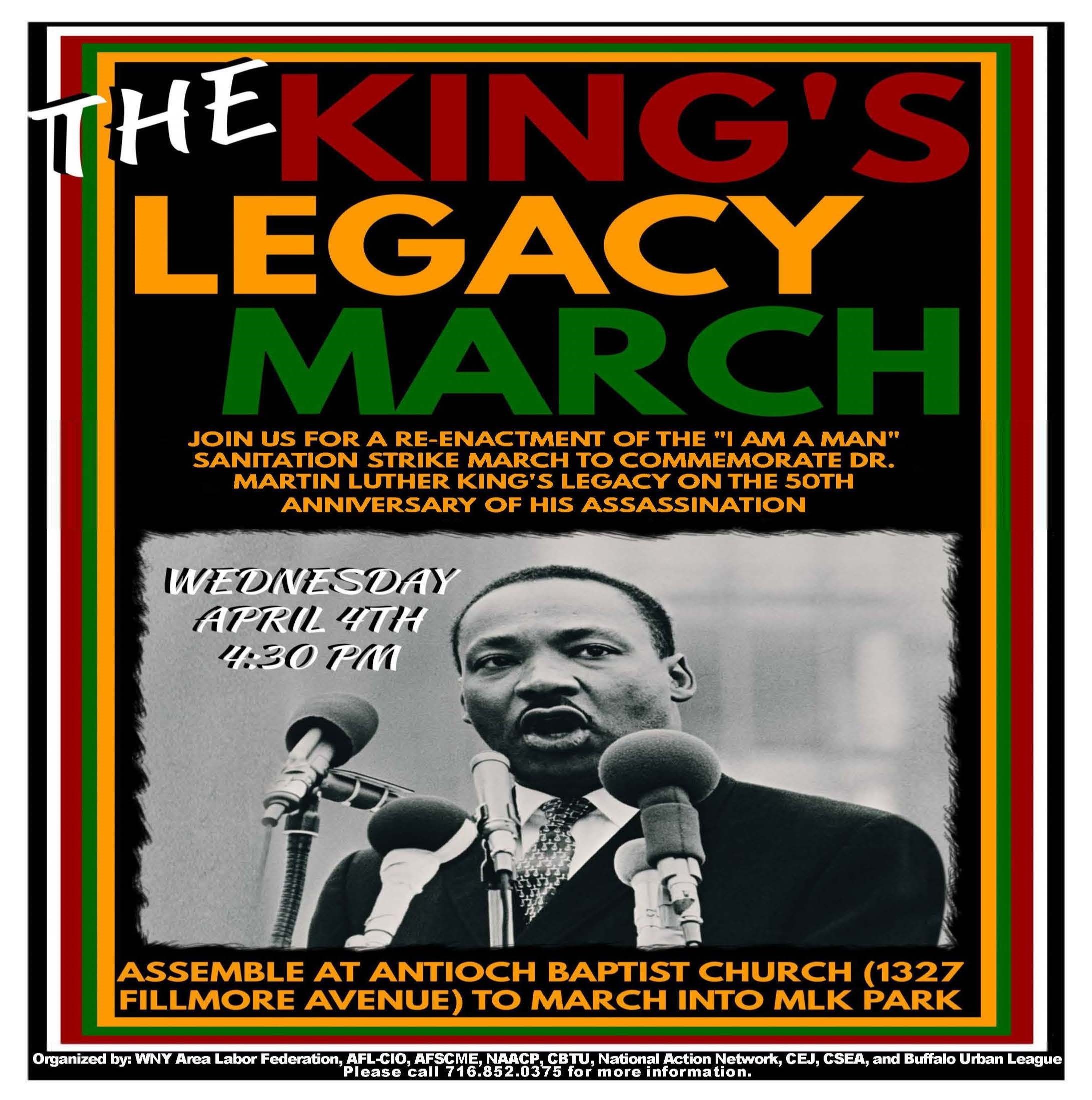 (BUFFALO, NEW YORK) – Members of Buffalo’s Labor Movement will join with a host of Community Leaders on Wednesday (April 4th) to recreate Dr. Martin Luther King, Jr’s Legacy March through the City’s East Side – complete with those participating wearing “I AM A MAN” signs and a Sanitation Truck to remember the Memphis, Tennessee Workers’ Strike and the 50th anniversary of Dr. King’s assassination. 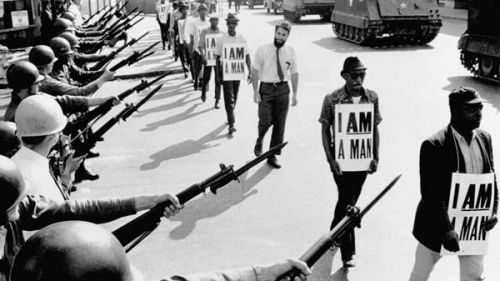 Sponsored the Western New York AFL-CIO Area Labor Federation (WNYALF), the American Federation of State, County & Municipal Employees (AFSCME) Council 35 and 66, the Civil Service Employees Association (CSEA), the Buffalo Branch of the NAACP, the Buffalo Urban League, the Coalition for Economic Justice (CEJ), the National Action Network and the Coalition of Black Trade Unionists (CBTU), the City of Buffalo, the Buffalo Peacemakers and the United Coalition of Churches and Brotherhood, the idea to hold such a march came from Richard Bartolotta, who serves as Vice President of AFSCME Local 650 in Buffalo.

Bartolotta told WNYLaborToday.com he was inspired by AFSCME’s Nationwide I AM 2018 Campaign, which was announced in June of 2017 and launched a months-long commemoration of the life of Dr. King and the 1968 Sanitation Workers’ Strike in Memphis.

2018 also marks the 50th anniversary of the assassination of Dr. King and the cause for which the Civil Rights Leader traveled to Tennessee, where he was gunned down by an assassin on April 4th.  At the time of the I AM 2018 Campaign announcement in June, National President Lee Saunders said AFSCME would “build a ‘movement of dedicated activists who can continue the unfinished work of realizing Dr. King’s dream.’”

Dr. King was assassinated just one day after he delivered his “I’ve Been to the Mountaintop” speech in Memphis.  He traveled there to address a rally supporting the Strike by 1,300 Sanitation Workers, who were represented by AFSCME Local 1733. 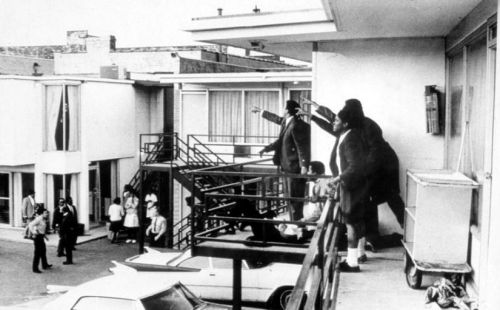 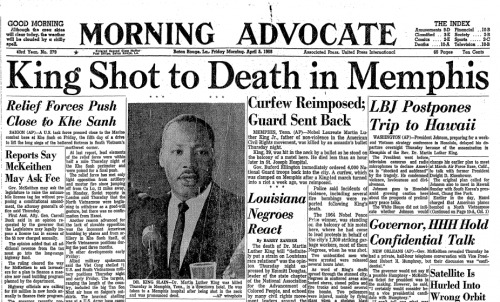 Soon thereafter, the Strikers - known by their message, “I Am A Man” - won their fight for dignity and respect on the job, an achievement that became an important milestone not only for AFSCME, but for the entire Civil Rights Movement.

“I knew an event was going to be held in Memphis, but I thought to myself that ‘a lot of people don’t realize’ it’s the fiftieth anniversary of the Sanitation Strike and Dr. King’s assassination.  ‘It was getting lost’ on people.  Even though fifty years has gone by, ‘we’re still in the struggle’ and because ‘not everyone is going to make it to Memphis’ (for the remembrance), I decided to call the WNYALF.  They ‘liked’ (the idea of doing a march here in Buffalo) ‘and asked what we needed to do.’  ‘They immediately got involved,’” Bartolotta (pictured below) told WNYLaborToday.com. 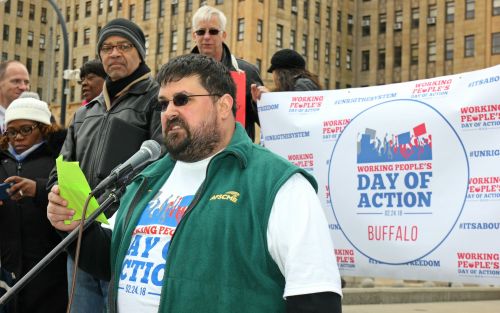 “People ‘need to remember how (Organized) Labor and Civil Rights came together,’” Bartolotta told Your On-Line Labor Newspaper.  “And that after the assassination and the settling of the Strike, President Lyndon Johnson signed the Civil Rights Act in 1964.  ‘Things started to move forward’ and that it was a ‘big turning point’ in our history.”

Bartolotta was quick to underscore the point that the event here in Buffalo “is not a Labor-only event.”  “Everyone we’ve talked to ‘has been very positive about it and very interested in getting involved.’  We ‘want to involve a lot of young people in the march because they don’t know of the Labor aspect of it, but this is not a Labor event.’  ‘We reached out to the entire community and people have come together.’  ‘We’re building together for the battles we are in,’” he said.

The peaceful march and commemorative service will be held on Wednesday in Buffalo’s predominately African-American East Side, starting at 4:30 p.m. at the Antioch Baptist Church on Fillmore Avenue.  Those participating will wear I AM A MAN signs that will hang on their bodies.  They will march to nearby Dr. Martin Luther King Park, where all will gather in honor at a statue of Dr. King.  A Buffalo Sanitation Truck will also be part of the march, Bartolotta said, to serve as a reminder of the Memphis Sanitation Strike.

“I think it is ‘extremely important that Labor work with all these groups, to let them know that Labor is with them,’” Bartolotta told WNYLaborToday.com.  “Labor is ‘constantly under attack, but we’re reaching out and building coalitions to help to preserve’ the Labor Movement.”

WNYALF Staff Representative Angela Blue said: “The King’s Legacy March not only holds ‘special significance’ to Labor, but it ‘also allows for the Western New York Community to come together as one to reflect upon the honorable practices’ of Dr. King.”

Blue also pointed out that there are a number of residents in the Buffalo Community who still remember Dr. King’s visit to Buffalo back in 1967 and the speech he delivered at Kleinhans Music Hall, which is stoking a high level of interest in Wednesday’s event.

“People are ‘standing together’ locally and nationally in the face of (the many) attacks on Unions, an ‘unstable’ economy, ‘faulty’ legislation and Civil Rights ‘violations.’  We are a country that has ‘aligned (itself) with several National Social Justice Movements, one of the largest being led by the youth of America,’” the WNYALF Representative said.  “The King’s Legacy March ‘reminds us of how far we have come’ in the Labor Movement and ‘signifies a path that we all, as a community, need to continue to walk together.’  ‘The future of our community depends upon it.’”

Getting back to AFSCME’s National I AM Campaign, it has included the training of 2,000 Organizers to work in communities across the country to ignite activism to fight poverty, income inequality and racial disparity.  Town hall meetings have also held to educate the public about Dr. King’s legacy and the issues he cared about.  In addition, AFSCME also worked with representatives of the sports and entertainment industries, good corporate actors, Faith Leaders and community groups, among others, to help ensure Dr. King’s message endures.

Through organizing, community actions and strategic partnerships, AFSCME President Saunders said his Union worked to connect the Strikers’ legacy - and that of Dr. King - to challenges now confronting our communities.

The following in a chronology of the 1968 AFSCME Memphis Sanitation Workers' Strike, courtesy of a post by WNYLaborToday.com Union Friend John Doherty Via Facebook:

Tuesday, February 1st - Two Sanitation Workers, Echol Cole and Robert Walker, are killed in an accident on a city truck.

Monday, February 12th - Memphis Sanitation and Public Employees Strike after last-minute attempts to resolve grievances fail.  Newspapers claim 200 Workers of 1,300 remain on the job, but only 38 of 180 trucks move.  Mayor Loeb says the Strike is illegal, but adds: "This office stands ready to talk to anyone about his legitimate questions at any time."

Tuesday, February 13th - An International AFSCME Union Official flies in from Washington to meet with the mayor.  He calls for Union Recognition, Dues Checkoff and negotiations to resolve the Workers' grievances.  The Mayor says he won’t hire new Workers unless the Strikers return to their jobs.

Wednesday, February 14th - The Mayor delivers a back-to-work ultimatum for 7 a.m. on February 15th.  Police escort the few garbage trucks in operation.  Negotiations between the city and the Union break off.  Newspapers say more than 10,000 tons of garbage is piled up.

Sunday, February 18th - AFSCME International President Jerry Wurf arrives and says the Strike can end only when the Workers' demands are met.  The Ministerial Association arranges a meeting between the Mayor and Union Leaders moderated by a Memphis Rabbi.  It goes until 5 a.m.

Monday, February 19th – The NAACP and others stage all-night vigil and picketing at city hall.

Tuesday, February 20th - The Union and the NAACP call for a citywide boycott of downtown merchants.

Thursday, February 22nd - A City Council Sub-Committee headed by Councilman Fred Davis urges that the city recognize the Union during a rowdy meeting in Council Chambers that is packed with more than 1,000 Strikers and supporters.  The meeting adjourns without action.

Saturday, February 24th - Black Leaders and Ministers form a citywide organization to support the Strike and the boycott.  The City obtains a court injunction to keep the Union from staging demonstrations or picketing.

Sunday, February 25th - Ministers call on their congregations to boycott and march.

Monday, February 26th - Daily marches begin, amid rumors that a compromise has been reached by the Mayor.

Tuesday, February 27th - The Mayor backs down on the compromise.  Hundreds demonstrate at city hall.  Courts cite 23 Union Members for contempt of court.

Thursday, February 29th - Mayor Loeb sends each Striker a letter inviting him back to work without Union Recognition.  Two Strike Leaders arrested for jaywalking and the Union files suit in Federal Court.

Friday, March 1st - Mayor meets with Black Ministers.  Windows at his home are broken and he blames the Strikers.  A Federal Judge rejects Union's suit.

Tuesday, March 5th - Ministers announce the Rev. Dr. Martin Luther King, Jr. will come to Memphis, as 116 Strikers and supporters are arrested for sitting in at city hall.

Wednesday, March 6th - Seven Union Leaders are given 10-day sentences and fines for contempt of court.  The Strikers stage a mock funeral at city hall, lamenting the death of freedom in Memphis.

Monday, March 11th - Students skip high school to participate in the march that is led by Black Ministers.  Two students are arrested.

Wednesday, April 3rd - Dr. King returns to Memphis and addresses rally, delivering his famous "I've been to the Mountaintop" address.

Thursday, April 4th - A sniper, later captured and identified as James Earl Ray, assassinates Dr. King as he stands on the balcony outside his room at the Lorraine Hotel.

Friday, April 5th - Federal troops and Attorney Gen. Ramsey Clark are in Memphis as the FBI begins international manhunt for the assassin.  President Johnson instructs Undersecretary of Labor James Reynolds to take charge of mediation to settle the Strike.

Saturday, April 6th - Reynolds meets with Mayor Loeb in the first of a long string of meetings - first with one side, then the other, but rarely together.

Monday, April 8th - Mrs. King and dozens of national figures lead a peaceful memorial march through downtown in tribute to Dr. King and in support of the Strike.

Wednesday, April 10th - Reynolds steps up meetings with City and Union Officials, most without publicity.

Tuesday, April 16th - AFSCME Leaders announce that agreement has been reached.  The Strikers vote to accept it and the Strike is over.