Packed House Of Around 200 âEnergizedâ By Cilento, WNY Area Labor Federation President Richard Lipsitz, U.S. Congressman Brian Higgins & Other Labor Leaders Who Revisit Major Victories Of 2017, âWith Their Sights Set On Much, Much Moreâ In 2018

Saturday’s (March 24th) meeting featured a standing room-only crowd of around 200 who attended the event that was held at the United Auto Workers (UAW) Union Hall in the Buffalo Suburb of Williamsville (WNYLaborToday.com Photos). 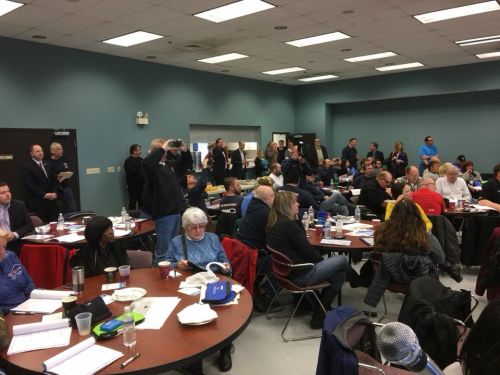 All were energized not only by Cilento, who delivered a number of interesting and motivating comments and observations in regards to how the Labor Movement can continue to thrive grow even with the ominous Janus vs. AFSCME rendering to come in the U.S. Supreme Court, but also by WNYALF President Richard Lipsitz (Pictured Below/WNYLaborToday.com Photo), who urged all in Organized Labor to continue on the path to building “consensus through honest discussion.” 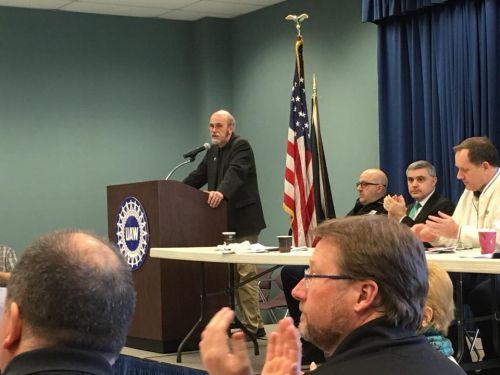 U.S. Congressman Brian Higgins (Pictured Below/WNYLaborToday.com Photo) also addressed Western New York Labor, telling all that Republican President Donald Trump “is an out-of-control lunatic, (someone) which I have never seen before in my life,” who is receiving support from “politically boneless” Republican Leaders, such as Paul Ryan and Mitch McConnell.  The Buffalo Democrat also made it a point to praise the young people who marched across the United States on Saturday for stricter gun control measures - including an estimated 800,000 in Washington, D.C. and another 3,000 in Buffalo, saying: “Pressure ‘needs to be put on Washington for needed change.’” 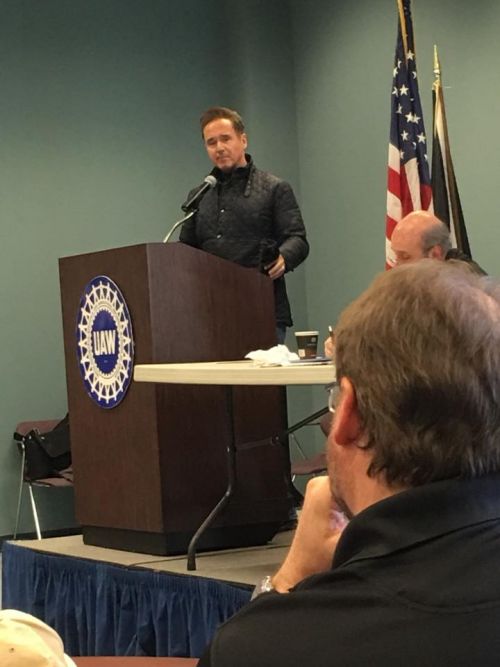 Meanwhile, Cilento (Pictured Below/WNYLaborToday.com Photo) took time to single out Public Worker Mark Janus, who he said was recruited by the Liberty Justice Club and the Koch Brothers to attack Union Workers, who are targeting more than just the Public Sector. 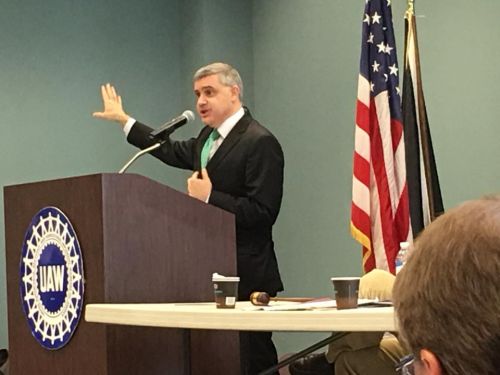 Should the U.S. Supreme Court rule in favor of Janus, it would allow Union Members to opt-out of paying their Union Dues, which in effect would make then so-called Free Riders, but still require their Union to represent them in their Collective Bargaining efforts.

“Mark Janus joined AFSCME (the American Federation of State, County & Municipal Employees) eleven years ago.  ‘He could have taken a different job, but he chose to be there.’  Now, Union Members make - on average - about ($11,000) ‘more a year than their Non-Union counterparts.’  So over that eleven years, (Janus) made ($121,000), ‘but I don’t see Janus giving back that money.’  ‘He’s keeping it for himself.’  ‘And I’m sure he went to the doctor for his check-ups, with the Union Health Insurance he has.’  ‘He believes in Collective Bargaining, but he believes in negotiating his own contract.’  ‘Janus is being taken for a ride,’” Cilento said.

Building off an extremely strong foundation of Union Membership here in New York State - with 2.5 million Members, 3,000 Affiliated Member Unions, 24% of New York State’s Workforce Unionized and 75,000 new Union Members in the State over the past 12 months, Cilento said the New York State AFL-CIO will embark on an “internal and external communications effort” and poll Union Members across New York in order to get them further mobilized.

“We’ll hold focus groups from Buffalo to Albany to New York City, because ‘information is power and we want to know what issues resonates’ (with Membership),” he said.

Secondly, Cilento said the New York State AFL-CIO will also embark on an external effort, because Organized Labor “would be ‘remiss if we do not build off’” its amazing 87%-13% victory in defeating the Constitutional Convention that was on the November 2017 Ballot.

“What I saw was ‘a sense of unity, with house after house after house with law signs (carrying a Vote No on the Constitutional Convention message).  We ‘need to put together a forever’ campaign ‘to create a greater sense of unity and shared purpose’ - a ‘Strong Union’ Campaign with decals, signs and lawn signs so your neighbors start asking, ‘What’s this all about?’  This is because, when (Organized Labor) ‘is pushed, we push back.’  ‘And we’re going to win.’  ‘We might get a little bloody, but that’s okay.’  ‘We know exactly what we are fighting for, our children - to make a better future for them.’  (Our opponents) ‘do not understand what’s inside us.’  ‘We fight from our hearts, for our children, our family, friends and our Union Brothers and Sisters.’  (The other side) ‘fights for their wallets, their bottom lines.’  ‘I’ll take heart over profit every day.’  ‘We win, they lose when we stand together,’” Cilento said.

Lipsitz, who won re-election to a new three-year term by running unopposed, welcomed his newly sworn-in Board (Pictured Below/WNYLaborToday.com Photo) and then delivered his annual address, which highlighted a multitude of Labor victories and involvements over the past 12 months - from Labor actions to political races to community involvement, and pointed to the work Unions and their Members must be focused on for the remainder of 2018. 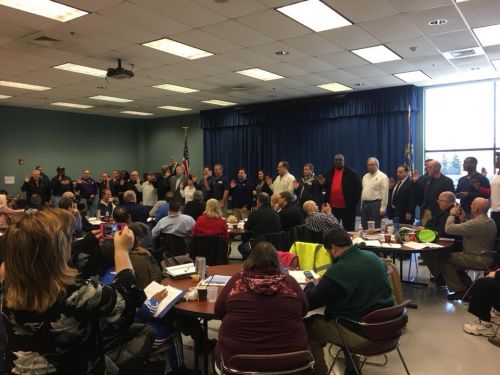 “The ‘key to all these and to several others in which we participated is our own unity and our principled alliance with established political parties’ - the Democratic Party and the Working Families Party.  2018 is a Congressional Election Year, as well as State Assembly and Senate, the U.S. Senate, Governor, Attorney General and Comptroller.  ‘We have a strong interest in this fight and we must participate in this election by maximizing our united efforts to win key elections,’” Lipsitz said.

“2018 will ‘test us in many ways.’  ‘All of us must be strong and strive to find the unity that this work inevitably provides us with and if we do our job right, has led and will lead to successful struggles.’  ‘Sometimes this ‘can be confusing and complicated,’ but when this happens, I like to take a ‘deep breath before the plunge’ - ‘to think before I simply react.’  ‘The goal is to win and not just to engage in a fight.’  ‘We’ve made real progress in many directions.’  I ‘pledge we will continue to do so in the coming year.’  Brothers and Sisters, we ‘all only get one shot at this life, let’s make the best of each day.’  Our Area Labor Federation ‘should be like a beacon lighting the way to a better world.’  ‘I ask we all make a recommitment to that goal, and turn 2018 into one successful struggle after another,’” the WNYALF President said.

Congressman Higgins - who thanked those in the room for their Unions’ political support over the years: “I would have not been here in the U.S. Congress without you.” - recounted his family history of being Union Bricklayers and made it a point to publicly thank both WNYALF President Lipsitz and Dan Boody - a former WNYALF President, President of the Buffalo Building & Construction Trades Council and Business Manager of International Union of Painters & Allied Trades/District 4 - who was seated at a nearby table, for the role they played in his campaigns over the years.

Representatives from each of the WNYALF’s five Central Labor Councils - Buffalo, Niagara-Orleans, Dunkirk, Jamestown and Cattaraugus-Allegany - also addressed those in attendance, providing rundowns of what has transpired in their Councils over the past 12 months, as well as detailing several Labor Fights that will take place in the coming months.

In addition, the WNYALF also drew attention to three local and continuing Labor problems at: the Suburban Buffalo Wendt Corporation, where newly-Unionized Workers are involved in a nasty contract fight with management; with the continuing fight to keep the Western New York Children’s Psychiatric Center in West Seneca, as opposed to Governor Andrew Cuomo’s plan to merge it into the Adult Buffalo Psychiatric Center; and a potential Strike by Teamsters-represented Workers employed by the AMR Ambulance Service in Buffalo.