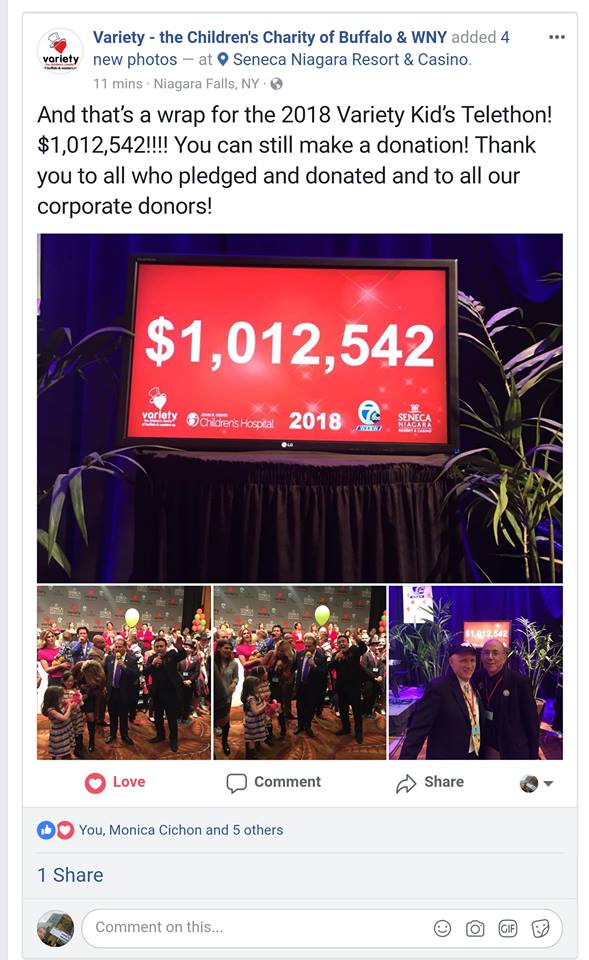 “It’s ‘another example’ of Labor ‘giving back’ and the ‘great job (Union Members) do.’  They ‘understand it and keep active in it,’” an extremely proud Buffalo AFL-CIO Central Labor Council President John Mudie (Pictured below on the right next to Teamsters Local 264 Business Agent Tony Vaccaro, who served as Labor Co-Chair for the telethon) told WNYLaborToday.com on Monday (March 5th).

The more than $50,000 was raised and/or donated by dozens of the area’s Unions, with the United Auto Workers (UAW) going above and beyond by taking donations at the gates at the companies where their Members are employed, either going into work or coming out after working their shifts.

Labor also raised local contributions via an auction of two game tickets to a private suite for an upcoming Buffalo Bills football game in the Fall, as well as an autographed guitar by the band members of Buffalo’s own Goo Goo Dolls.

In addition, the Buffalo Council raised about $1,000 during a recently-held chili cook-off and another $1,000 through the sale of Variety Club hard hat stickers and magnets coordinated by William Mayor of International Union of Painters & Allied Trades (IUPAT)/District Council 4.

And on the day of the event (Sunday, March 4th), 50 volunteers from the area’s Union Community - including the Civil Service Employees Association (CSEA), the Communications Workers of America (CWA), the UAW, area Teachers’ Unions - the Buffalo Teachers Federation (BTF) and the New York State United Teachers (NYSUT) - answered phones during a two-hour-long Labor Hour at the telethon.

Those volunteers were also decked out in their Union Colors, said Buffalo Labor Council President Mudie, who also serves as President of CWA Local 1122.

“I went back behind a curtain at the telethon and saw them all (the volunteers wearing their Union Colors).  It was ‘overwhelming and impressive as hell.’  We ‘got the word out’ and the Members ‘all wanted to be part of this - and the more the better,’” Mudie added.

Teamsters Local 264 Business Agent Tony Vaccaro - who served as Labor Co-Chair for the telethon and who will become a Board Member of the Variety Club later this year, told WNYLaborToday.com: “I’m ‘so proud to work with these hard-working folks.’  They ‘dedicated’ their Sunday and ‘gave back to their community.’  ‘And all of Members and Unions who ponied up.’  As I said when being interviewed at the telethon, ‘We are blessed to have such a children’s hospital in our own backyard that we don’t have to travel to get to a place like this.’”